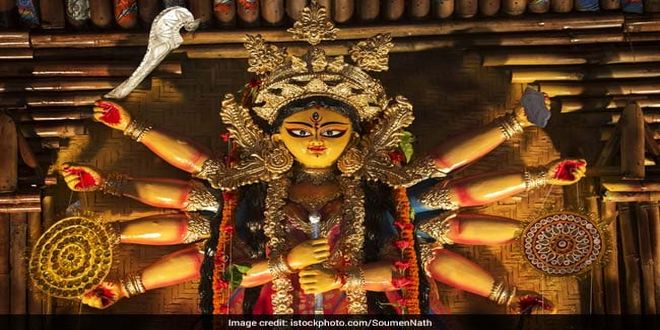 Kolkata: With rising pollution levels and water scarcity emerging as fundamental challenges to policy-makers across the planet, Durga puja committees in Kolkata have come up with green themes for their marquees to raise awareness on environment conservation. At Khidderpore 25 Palli, on the western fringes of the city, around 5 lakh plastic bottles are being used to embellish the pandal and generate awareness on global warming, artist Sanatan Dinda, who has conceived the theme, said.

Mr. Dinda, who has bagged several awards over the years for his marquee concepts, said,

Apart from plastic bottles, parts of air conditioners, fan coils and radiators have been used to create a tunnel leading to the pandal. Our objective is to drive home the message that one should be careful about dumping electronic waste.

For Ahiritola Sarbojonin Durgotsab, one of the popular puja pandals in the city, the committee members have decided to adopt ‘water scarcity’ as its theme.

We are re-creating a 1000-year-old stepwell of Gujarat, which, at one point of time, used to be a source of water for many villages, Tanmoy, one of the puja committee members, said.

Similarly, at Santoshpur Lake Palli, another crowd-puller, a snow-capped hill, about 10 feet in height, will adorn the marquee’s entrance.
Somnath Das, the general secretary of the puja committee, said it was important to sensitise people to the issue of global warming.

We will use a special preservation technique to prevent the ice from melting on the replica hill. I hope our efforts pay off and the visitors get to learn a thing or two about the perils of rising global temperatures. It’s important to act before it gets too late, he added.

Universal Health For All And Disease Free India Is Our Aim: Health Minister Harsh Vardhan