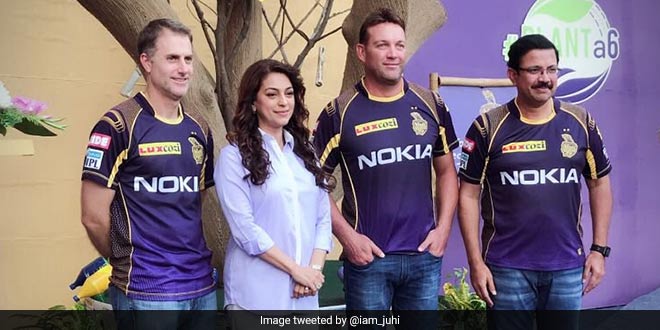 Mumbai: Looks like Kolkata Knight Riders’(KKR) anthem Korbo Lorbo Jeetbo, which literally translates to ‘Act, Fight and Win’ is now being used to tackle the garbage problems that arises after every cricket match. On Earth Day, the KKR management installed an organic waste converter in the stadium to manage the massive volume of waste generated during the Indian Premier League (IPL) matches. The machine, which is installed as a part of KKR’s clean-sweep mission, was inaugurated by team’s co-owner and actor Juhi Chawla, Managing Director and CEO Venky Mysore and Head Coach Jacques Kallis.

Our aim to is to prevent as much of waste as possible from going to the landfills and the organic waste generator will help in fulfilling the goal, said Juhi Chawla on Sunday.

This is our way to give back to the society and fans for all the love we have received in the city. KKR has always been conscious of the footprint we leave on the environment and have made dedicated efforts towards it.

The organic waste converter at Kolkata’s iconic stadium Eden Gardens will convert the leftover food into organic manure. The manure will be given to the Cricket Association of Bengal (CAB) to use it in Eden Gardens. A typical IPL match generates around 900 odd kilos of waste (Wet+Dry).

The waste generated will have to be segregated manually. Dry wastes like plastic bottles, cardboard planks, papers, chips packets, etc will be sent to the local recycling facility. The food waste will be deposited in the new machine. Depending on the amount of wet waste generated It will take 24-36 hours for the machine to make compost.

The season’s first IPL match on April 8 between KKR and Royal Challengers Bangalore saw the machine that was installed last year, convert 700 kilos of organic waste – noodles, bits of pizza bread, local favourite lucher-alur dum – into compost and was handed over to the CAB for Eden Gardens.

Sharing the news on a social networking site, Juhi Chawla, tweeted, “Approximately 700 Kgs of wet waste had been added to organic waste compactor & all the compost generated will be handed over to the CAB for the Eden Gardens!”

Approximately 700 Kgs of wet waste had been added to organic waste compactor & all the compost generated will be handed over to the CAB for the Eden Gardens! @KKRiders @RedChilliesEnt @CabCricket pic.twitter.com/rsNkYmBd9W

An Attack On Plastics

Juhi Chawla, who has always lent her support against the use of plastic items, also said that this year in the eleventh edition of IPL, the KKR team also avoided use of plastics on various occasions. From disallowing plastic bags in the stadium to having cloth flags instead of the usual plastic ones, the team incorporated it all.

“This season KKR team enforced no plastic cheer items by the sponsors at Eden Gardens, with strictly no plastic bags allowed & all KKR flags in cloth with sticks made from recycled paper,” the actor tweeted.

This season KKR team enforced no plastic cheer items by the sponsors at Eden Gardens, with strictly no plastic bags allowed & all KKR flags in cloth with sticks in recycled paper.

Association of KKR with waste management began last year. All the waste generated during the IPL matches at the Eden Gardens was segregated, collected and disposed OF in an environment-friendly manner. Overall, out of the total waste generated, segregated waste of 20,606 kilos, around 19,173 kilos were successfully treated and a mere 6.8% was sent to the landfill.