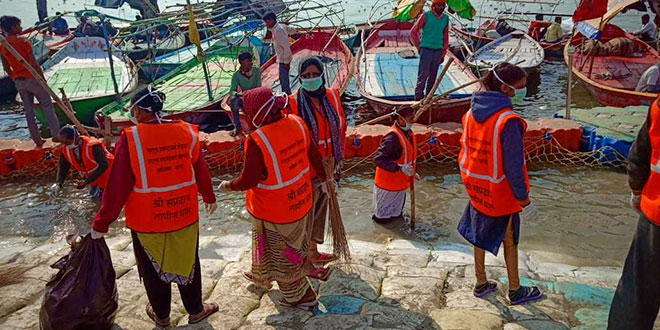 Allahabad: Going beyond the call of duty seems to be the mantra for “Swachhta Doots” (messengers of cleanliness) who work late into the night to ensure “Bhavya Kumbh, Divya Kumbh” (Grand Kumbh, Divine Kumbh) is reflected both in letter and spirit. Ravi Kumar, a Swachhta Doot, said, “For the last one month or so, I along with 11 others are engaged in keeping the premises of Kumbh Mela clean. We ensure cleanliness in and around a few eateries set up in the city. Our main job is to ensure that there is no littering in the Mela area.”

On an average, a Swachhta Doot works for nearly 10-12 hours every day, going beyond their 8-hour shift. The job pressure is more on the major bathing days when there is a heavy influx of devotees who throng the place from far and wide, he said. Mr. Kumar who hails from Fatehpur district of Uttar Pradesh, said,

A few days back, I was sleeping when my phone rang and I was asked to immediately report to work.

He, however, said Swachhta Doot like him “feel happy when visitors praise the cleanliness of Kumbh”.

More than one lakh toilets have been installed this time for maintaining cleanliness and ensuring open defecation-free Kumbh. Solid waste is to be collected in 20,000 dustbins and transported out of the Mela area. According to the official website of the Kumbh 2019,

More than 15,000 sanitation workers, 40 compactors and 120 tippers have been pressed into service for disposal of waste.

Apart from this, more than 2,000 ”Ganga Praharis” or ”Swachhagrahis” have been engaged as foot soldiers for keeping the Kumbh Mela area clean. Shyam Lal, who has also been deployed as a Swachhta Doot, said they have been given individual identity cards. He said,

Generally we are on 8–hour shift, but the work goes beyond 10 hours, and sometimes it touches 12 hours.

Mr. Lal was of the opinion that installation of LED (Light Emitting Diode) lights at the Kumbh have proved to be quite handy as they can spot the garbage from a distance. Raj Karan, another Swachhta Doot, said, “At times we hear from visitors that the Kumbh Mela this year is cleaner than those in previous years. It makes us happy and satisfied that people are liking our work.”

He added that people have become more aware of cleanliness and that makes their work relatively easy.