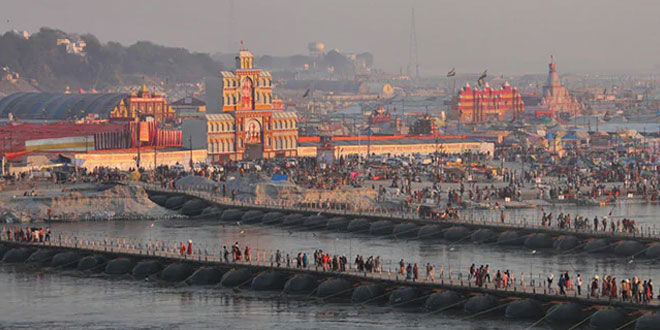 New Delhi: The sound of the hymns, the air laden with the fragrance of flowers and incense sticks, the skyline adorned with brightly decked up temples that break the cacophony of millions that descend, with the rhythmic chiming of bells and the chants of the mantras. The Kumbh Mela is a religious congregation like no other, the sea of humanity comprising enlightened godmen, the ascetic sadhus, the average devotees and the curious tourists, all soaking in the sights and sounds, taking a dip in holy waters and hoping to rediscover themselves. Kumbh has been accorded the status of ‘Intangible Cultural Heritage of Humanity’ by UNESCO. For a large number of Hindus, it is the most awaited and revered event that happens either every six years – Ardh Kumbh or in 12 years – Maha Kumbh. This year the Kumbh Mela is an Ardh Kumbh and it is set to begin on January 15 in Prayagraj (Allahabad) of Uttar Pradesh at the confluence of Ganga, Yamuna, and Saraswati, ‘Sangam’. It will continue for a period of two months, ending on March 4. The Government of Uttar Pradesh is gearing up to showcase this Kumbh as a stellar example of the Clean India movement.

Also Read: Hope Sanitation Will Be Maintained Along With Reverence At Kumbh Mela In January: PM Modi On Mann Ki Baat

The government of Uttar Pradesh in a statement said,

Kumbh represents glorious traditions of India. It is the largest religious gathering of the world. However, this year particularly, the event is subject of special curiosity and attraction for the country and the world as it will be a ‘Swachh Kumbh’, the messenger of cleanliness.

The National Mission For Clean Ganga (NMCG) anticipates that more than 120 million people will visit the Kumbh Mela over the period of two months. The state of Uttar Pradesh (UP) has been going through elaborate preparations for the massive congregation whole of last year. According to the UP Government, people from over six lakh villages of India along with the overseas devotees will participate. Awanish Kumar Awasthi, IAS, Additional Chief Secretary, Information, Tourism & Religious Affairs, Government of UP said,

Kumbh is where the whole of India comes together- socially, culturally and spiritually. The state government is endeavouring to provide a clean and hygienic atmosphere to pilgrims coming to Kumbh.

#Kumbh the largest public gathering anywhere in the world, plays a pivotal role in the historical, cultural and spiritual heritage of the country.

For the convenience of the pilgrims and tourists, the state government is laying special emphasis on cleanliness during the Prayagraj Kumbh-2019. Due to a lesser number of toilets in the previous Kumbh, people were forced to defecate in the open. This time, over 1 lakh (1,22,000) toilets have been constructed and more than double the number of sanitary staff will be deployed compared to the previous Kumbh in 2013 in Prayagraj (Allahabad).

Being the largest religious gathering, the Ardh Kumbh Mela, is considered to be very sacred and involves ritual bathing at the Triveni Sangam. Many people, while bathing, relieve themselves in the river without realising that along with offering prayers in the river, they are polluting the holy river. Urinals and toilets will keep this problem at bay and help the mela become a Swachh Kumbh Mela. The message of cleanliness from Prayagraj (Allahabad) will go to every nook and corner of the country.

After the last Mela, the sacred land of the ‘Sangam’ remained filled with garbage and leftovers, observed the statement from UP government. To avoid this, foolproof arrangements have been made this time, under which garbage will be lifted from the dustbins and will be collected in a compactor by vehicles to be transported out of the Mela area for proper disposal without any scattering, said the statement.

In a bid to make Prayagraj beautiful, the local authorities are decorating 20 lakh square metres of walls with the pictures and drawings to give a glimpse of Indian culture, through pictures, to the visitors. As many as 20,000 dustbins have been placed in the Mela area, besides deploying 140 tippers and 40 compactors for ensuring solid waste management.

Along with building of toilets and arranging for better waste management, special campaigns have also been going on to ensure that the banks of Ganga remain clean and pollution free. For this, 32 nullahs (drains) opening in the Ganga have been sealed and three Sewer Treatment Plants (STPs) have been installed and upgradation of seven STPs have been done. Work of sewer connection and setting up of pumping station by laying 177 km sewer lines has been completed. Also, the UP Government has decided to close a few tanneries of Kanpur that pollute the river Ganga. Apart from this, the development of 10 ghats and riverfront conservation work has been undertaken in the Mela area.

With official estimates of over 120 million people, #kumbh Nagri #Prayagraj will witness its largest gathering ever.

Air Pollution: 73 Per Cent Of Delhi Residents ‘Not Satisfied’ With Air Quality, Says A Study