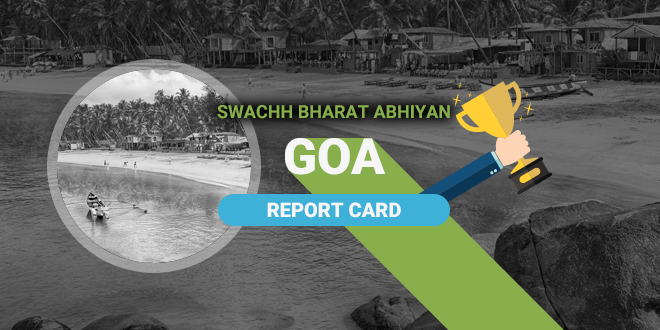 Unlike in other parts of India where finance and behaviour change are the biggest challenges in Swachh Bharat Abhiyan‘s goal of an Open Defecation Free (ODF) nation, the most popular tourist state, Goa has its own regional issues such as landlord-tenancy contract and lack of space. Due to these problems, which are just not restricted to the rural areas but also to the urban areas, Goa’s current sanitation coverage is just 21 per cent and 76 per cent in urban and rural areas respectively.

In every region of the state, almost 1/3rd of the properties (residential and commercial) are rented. Besides going through the tedious process of applying for and constructing a toilet, Goans have to also procure a ‘No Objection Certificate’ (NOC) from their landlord. Earlier under the Goa Tenancy Act, a tenant would get 3 years to make changes in the house, but the revised policy has abolished this. We are trying to put a clause in the Act which would give a special exemption for building toilets. Meanwhile we are personally urging all the landlords to issue NOC without any delays.

Also Read: Three Years Of Swachh Bharat Abhiyan: Rajasthan’s Performance Has Been Impressive, But Allegations Of Coercion May Hamper The State’s Image

Spacing is another issue adds Dr Kumar, “The houses are structured in a way that there is no practically no room for people to construct a toilet, so either they have to be built outside the house, in the backyard or utilise a community/public toilet. So instead of going through the long process and yet not having a toilet at home due to a space crunch, the citizens prefer defecating in open.”

So far, out of the 215 municipal wards, only 47 have been declared open defecation free (ODF) after third party verification. The state has self-declared 100 of its wards ODF, which are presently undergoing the three step verification process. Around 141 toilets have been built since 2014 and around 3,000 families still lack toilet access thereby opting for open defecation. The urban area aims to go ODF by March next year confirmed Dr Kumar.

Also Read: With Commendable Progress In Both Urban And Rural Sanitation, Chhattisgarh Is On Its Way To Be Open Defecation Free

The rural area comprises two districts- North Goa and South Goa. About 28,637 toilets have been built since 2014. The overall sanitation coverage has increased from 60.72 per cent to 76.22 per cent since the launch of the swachhta campaign. To boost the campaign, both the civic bodies have initiated a fresh survey to identify extremely vulnerable areas of open defecation, houses who are facing the issue of NOC, and households with no access to either public or individual toilets. Meanwhile mobile toilets have been installed at tourist place.

Rural Goa requires construction of 60,000 more toilets to make the area ODF. Lack of authentic data on the toilet facilities had created a lot of confusion among the officials and the people. We plan to finish the survey latest by November end which will then simplify the ODF process, says Sandhya Kamat, Director, Swachh Bharat Mission-Gramin (SBM-G).

When asked further if there is any deadline set to make rural Goa ODF she says, “As for now, we are following the Centre’s deadline of October 2019, but once the survey ends we will most probably push the deadline ahead of it.” 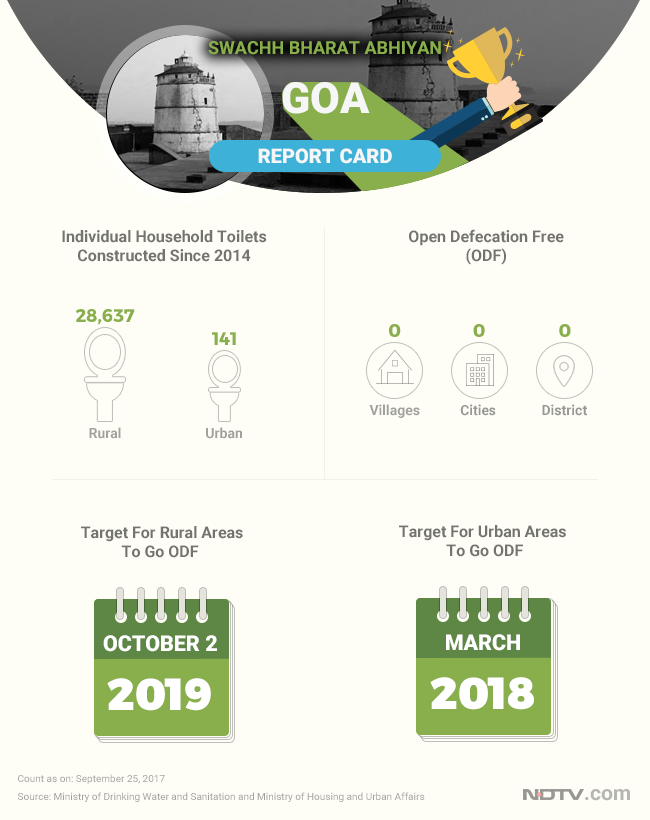 Also Read: Goa Puts A Ban On Open Cooking By Tourists, Claims It Dirties The Surroundings And Is Unhygienic

A Glance At Goa’s Journey To End Open Defecation

The Goa State Urban Development Agency (GSUDA) last December had identified households where installing bio-toilets was feasible and had invited tenders from vendors to provide fibre-reinforced plastic-made bio-toilets developed by the Defence Research and Development Organisation. The urban local body would bear the 85 per cent of the toilet construction cost. The process has already begun in urban areas of Mapusa, Ponda, Sankhali, Margao, Bicholim, etc. Dr Kumar said that with the help of bio-toilets it will aim to make these areas ODF.

From April 2016 to March 2017 the Goa State Pollution Control Board (GSPCB) examined state’s 52 water bodies and concluded that high levels of fecal matter resulting from open defecation is one of the major causes of river pollution in the coastal state. The report that was released in June this year stated that most of the spots examined were open fields and spaces or slums along the water bodies. To end the problem, civic bodies were immediately directed to install temporary toilets until permanent ones get constructed.

3) A Check On Tourists Defecating In Open

For Goa, which has an influx of lakhs of tourists round the year, managing such traffic and sanitation is definitely taking a toll on its civic bodies. To address this issue, civic bodies from rural and urban were asked to deploy extra staff to be stationed in public places to monitor and stop any kind of unhygienic practices.

Though Goa has been moving at a slow pace towards the ODF process, the overall sanitation coverage has always been high when compared to other states. Had the state taken the campaign in an aggressive manner like other states (rural Uttarakhand and Haryana) that were way behind than the 60 per cent sanitation coverage mark that Goa was at, when the Clean India Mission began, it would have successfully eradicated open defecation by now.