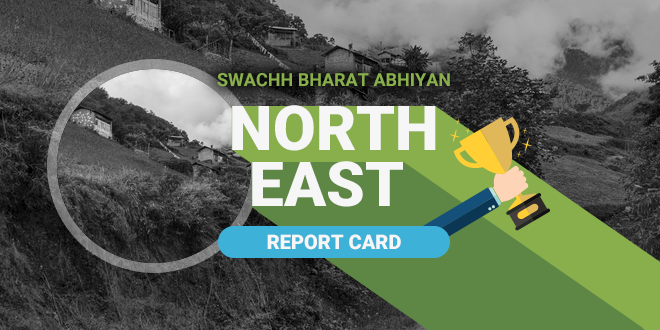 New Delhi: After three years of Swachh Bharat Abhiyan, the sanitation scenario in India today is a definite improvement over what it has been for decades. The dramatic increase in national sanitation coverage which at present is at 67.93 per cent, a sharp rise from the 38.70 per cent national coverage when the Abhiyan was launched in October 2, 2014.

Barring Sikkim, which had already attained the ODF status in 2008, the seven sister states of Assam, Meghalaya, Manipur, Mizoram, Tripura, Arunachal Pradesh and Nagaland have shown considerable improvement in their sanitation coverage, though the performance has not been at par for each.

Sikkim launched its ODF mission in 2003 and took five years for the state to eradicate open defecation. The state government however, is not content with just the ODF status. Ever since the Swachh Bharat Abhiyan was announced, Sikkim has taken initiatives to further boost the state’s sanitation status with building of more public toilets, installing more drinking water booths in the state and improve Sikkim’s major cities’ cleanliness. 20 public/community toilets have been constructed in the state already. To ensure that people continue using the toilets built, the state government has also begun initiatives such as Friday Field Day, where district collectors go on field visits to check if toilets are being used properly, green walkathons where children from schools walk to create awareness on sanitation and cleanliness and focus on installation of handwash systems and sanitary napkin vending machines in schools. The nurturing of a healthy sanitation culture is what Sikkim is moving towards in its post-ODF initiatives. 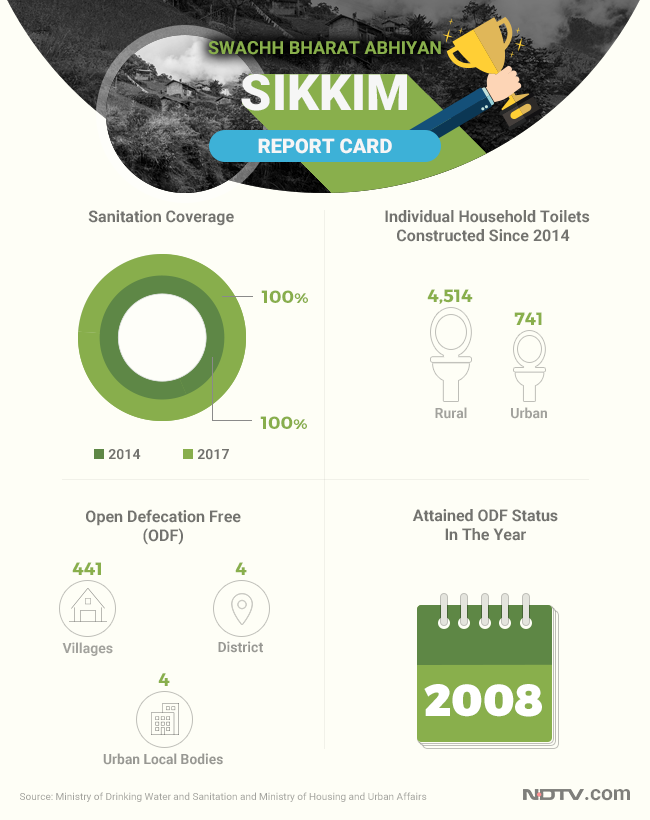 Sikkim has been successful in sustaining its ODF status

With over 19.5 lakh toilets (19,53,782) constructed, Assam remains the fastest moving northeastern state in terms of toilet construction. The sanitation coverage of the state is 76.24 per cent, a sharp increase from the 2014 percentage of 43.80. 67 public and community toilets have also been built across major cities in Assam, and the capital city of Guwahati achieved the ODF status in August 2017. To go completely ODF by October 2019, the Assam state government is now aiming to focus more on district wise eradication of open defecation, as only three of the state’s 32 districts are ODF. Floods continue to pose a major challenge and the state government is looking to install elevated toilets and eco-sanitation units in the flood prone areas of the state. While the government’s initiatives of holding daylong training workshops across districts to train officials and common people about toilet construction and usage are making a mark, the contribution of individuals like Mufti Nasihur Rahman, known as the ‘Swachhta Maulana’ in spreading awareness on safe sanitation is helping the state towards its final goal of constructing 10 lakh more individual household toilets (IHHLs). 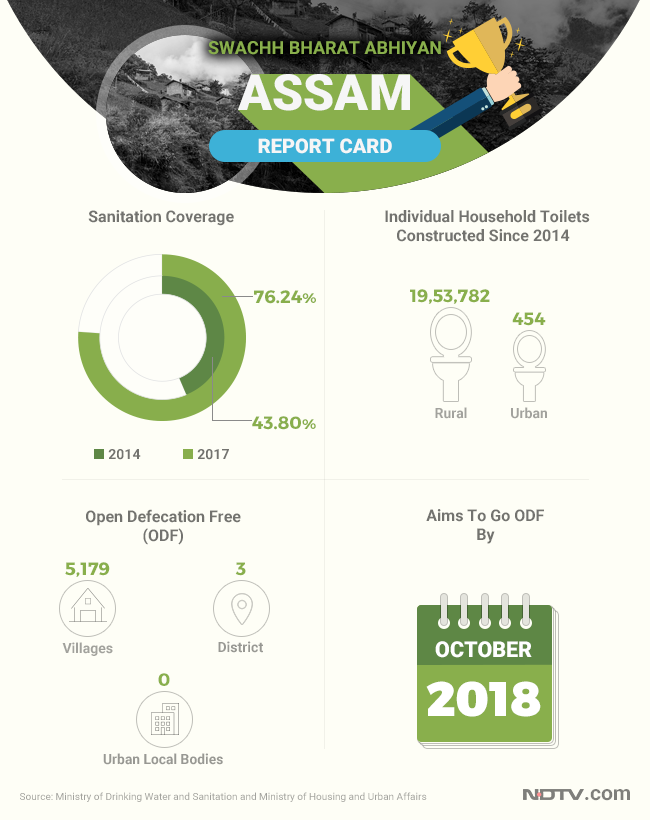 Arunachal Pradesh’s performance in the Swachh Bharat Abhiyan is a mixed bag. Though the state has managed to construct more than 85,000 IHHLs, only one district has managed to become ODF. Further, in its major cities, no public toilet has been constructed yet. But in all fairness, the state’s difficult terrain has made traditional construction of toilets a difficult option. The state has successfully experimented with bamboo toilets which are cost effective, as well as durable and has already been implemented across three districts and will be implemented in larger numbers in near future. The bamboo toilets initiative was recently honoured at the Swachh Bharat Hackathon Awards. The state has set an ODF target of October 2018 and in May 2017 announced that Rs 10,000 would be provided for conversion of insanitary toilets into sanitary ones, and requested MLAs to spend 10 per cent of their legislative assembly development funds towards toilet construction. With little more than two years to go, it will be interesting to witness the turn Arunachal’s ODF mission takes. 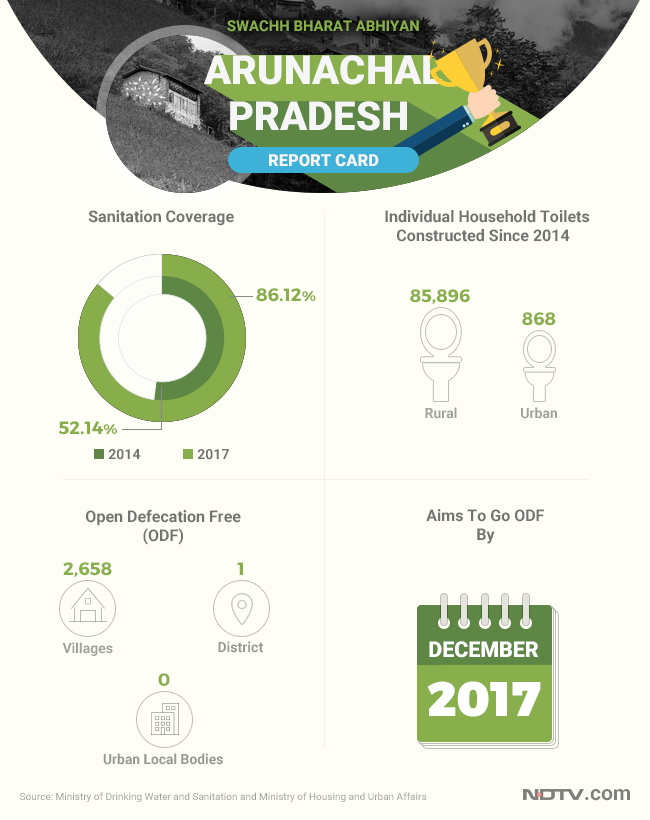 Mizoram had an impressive sanitation coverage of 78.08 per cent in 2014, which has now increased to 84.66 per cent with the construction of over 12,000 IHHLs and 5 out of 9 districts getting the ODF tag. Mizoram is one of the likeliest states, where the rural areas will become ODF soon, as announced by the Centre in February 2017. The urban performance has so far been subpar, with zero construction of public toilets under the mission. Mizoram has also performed stunningly well in combating child stunting with effective rural sanitation. The ODF status will be a big boost for not only the state but the region as well, with the state being the first of the seven sister states to become ODF. 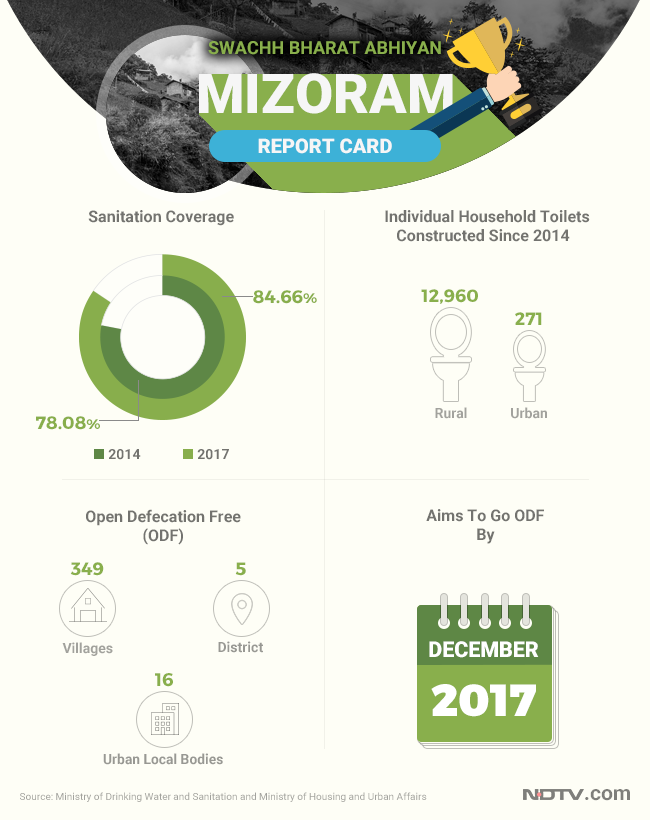 Rural sanitation in Meghalaya has witnessed a big jump from 61.66 per cent in 2014 to 89.91 per cent in 2017. Over 1 lakh (1,41,557) toilets have been built under the Abhiyan and two districts have already been declared ODF. The state government has also partnered with the NGO, Society for Action in Community Health (SACH) in 124 schools in four districts to build toilets and wash basins, as well as spread awareness on sanitation and hygiene. The state plans to eradicate open defecation from at least four more districts by the end of 2017. Urban sanitation wise, the state has a lot of ground to cover as no public or community toilets have been constructed under SBM in three years and availability of public toilets every 500 metres is still a rarity in the state. 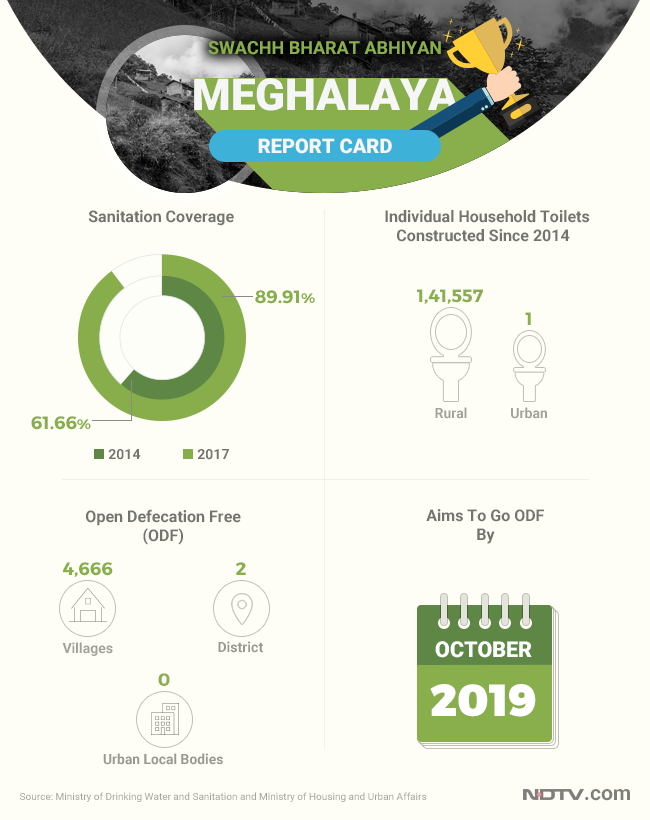 Nagaland’s sanitation coverage has gone up to 85.48 per cent from 57.43 per cent in 2014, in addition four out of its 11 districts have become ODF. The state has been encouraging in its efforts to make districts ODF and in August 2017, arranged for an awards ceremony where 10 villages from the Mokokchung district were awarded for going completely ODF. 71,274 toilets have been constructed across the state’s rural areas, but the district sanitation coverage of Mon, Tuensang and Peren, which are all below 55 per cent, remain a cause for concern. Over 285 IHHLs have also been constructed across the state’s urban areas, though no public community toilets have been constructed yet. Nagaland needs around 24,000 more rural IHHLs and is set to become ODF by early 2018. 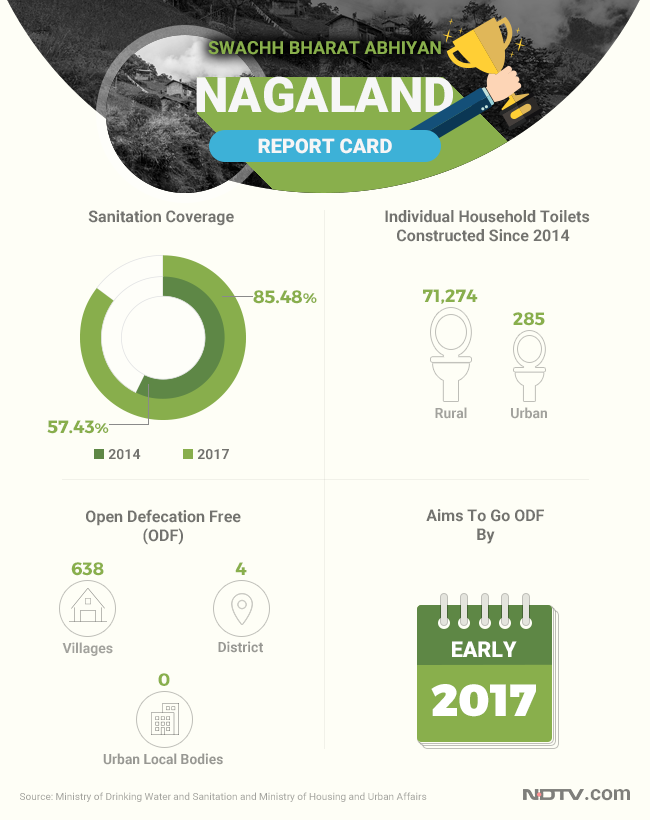 Manipur’s progress in improving sanitation coverage in rural areas has been slow compared to its neighbouring states, but delay in receiving funds from the Centre in the financial year of 2014-15 is a reason for its relatively slow progress. The state had coverage of 60.22 per cent in 2014, but in three years has only managed to grow up to 78.45 per cent. Over 1 lakh (1,23,114) toilets have been constructed but only two of the state’s 16 districts are ODF. In terms of urban IHHL construction however, the state has done quite well, constructing more than 3,476 toilets, a larger number than many of its neighbouring states. Manipur will need around 72,000 more toilets to go ODF and plans to do so by October 2, 2019. 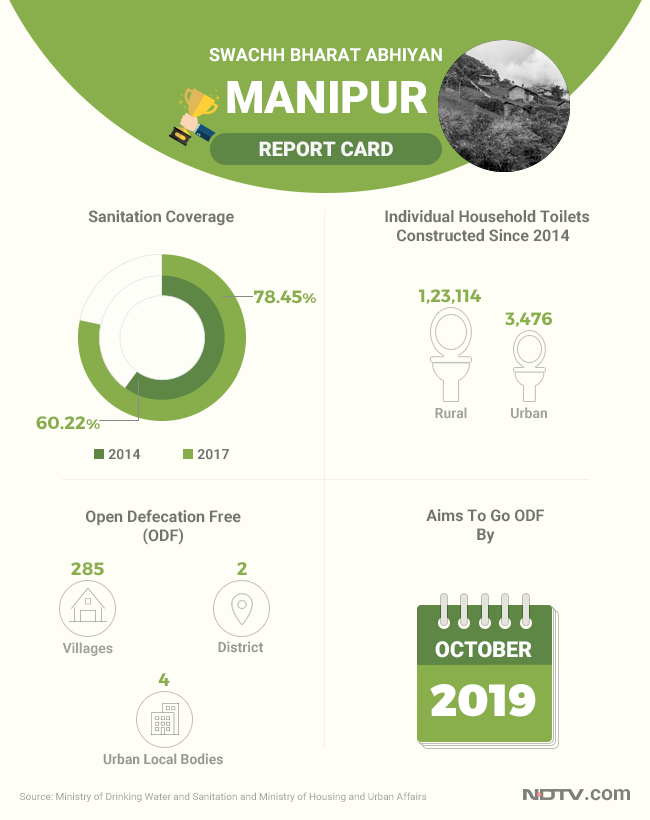 Tripura: Slowest In Toilet Construction In The Region

Tripura has been the slowest among all northeastern states in terms of improving both rural and urban sanitation coverage. In three years, the state’s sanitation coverage has increased to only 71.48 per cent from 63.21 per cent in 2014, and a total of over 1 lakh (1,37,249) toilets have been built in rural areas till now, while no public/community toilet has been built in the state’s urban areas. In 2016, the state government had announced its aim to make rural Tripura ODF by March 2017 but apart from the district of Sepahijala, no other district has managed the feat yet. To tackle the rampant practice of open defecation, three districts in South Tripura have banned open defecation. Earlier this year in May, the state identified priority districts and villages and has instructed district officials to ensure that the ODF target, for which construction of over 1,10,000 more toilets is necessary, is achieved by October 2019. 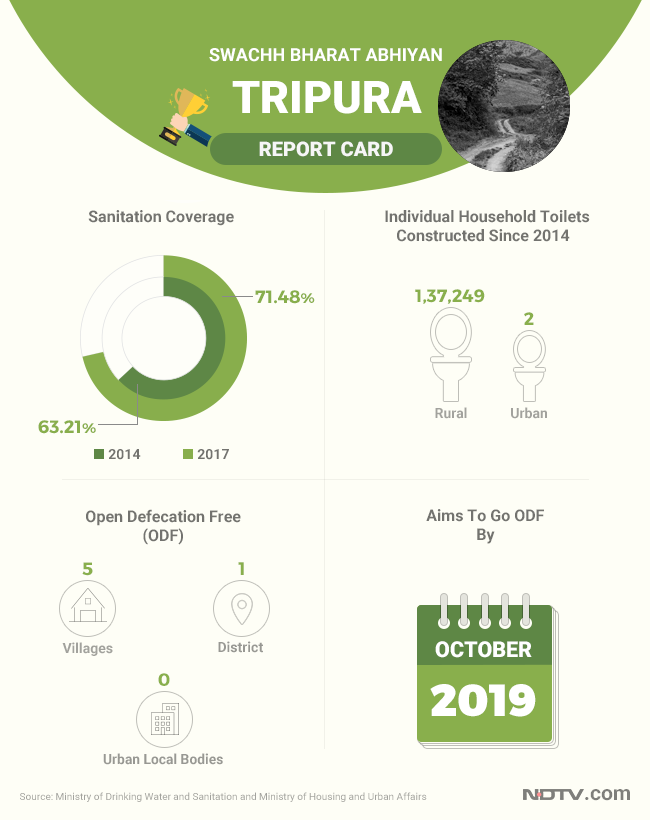 Despite problems of terrain, geography and traditionally lagging behind in development, the performance of northeastern states in Swachh Bharat Abhiyan has been impressive. With two more years to go, the northeastern states have ample time to improve their rural sanitation scenario. The urban sanitation however, needs work on a larger scale across the seven sister states of northeast India. Building of public and community toilets will be the key to improve urban sanitation and northeastern India can only become truly ODF when the practice of open defecation across villages, towns and cities is wholly eradicated.

Kerala On Its Way To Go 100% Swachh: First The State Tackled Open Defecation Effectively And Now It Aims To Go Waste Free