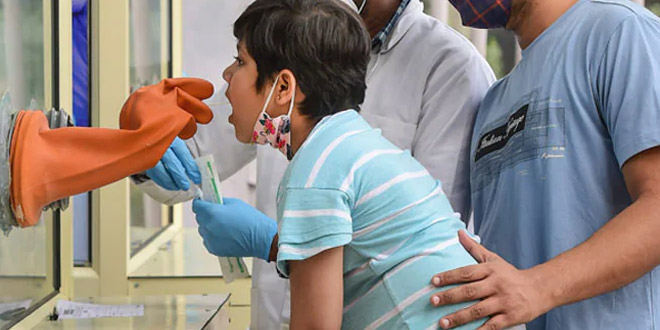 London: Most children who develop COVID-19 symptoms recover after six days, and the number who experience symptoms beyond four weeks is low, according to a large UK study published in The Lancet Child & Adolescent Health journal. The study, based on data reported through a smartphone app by parents and carers, provides the first detailed description of COVID-19 illness in symptomatic school-aged children. “It is reassuring that the number of children experiencing long-lasting symptoms of COVID-19 symptoms is low. Nevertheless, a small number of children do experience long illness with COVID-19, and our study validates the experiences of these children and their families,” said Professor Emma Duncan, lead author of the study, from King’s College London, UK.

The researchers noted that some adults experience a prolonged illness after COVID-19, described as long-COVID, where symptoms persist for four weeks or longer, but it is not known whether children can develop a similar condition or how common this is. Many children infected with the SARS-CoV-2 virus do not develop symptoms, but those who do tend to have a mild illness, they said.

The latest research used data collected through the ZOE COVID Study smartphone app, which includes data from more than 250,000 UK children aged five to 17 years. The team focused on reports collected between September 1, 2020 and February 22, 2021. Some 1,734 children developed symptoms of COVID-19 and received a positive PCR test result close to the onset of symptoms, with their symptoms reported regularly until they were healthy again.

Overall, these children were ill for an average of six days and experienced an average of three symptoms in the first week of illness, confirming that COVID-19 tends to manifest as a mild illness in children, and that they usually recover quickly, the researchers said. The study found that most children recovered within four weeks, with a minority experiencing symptoms after a month.

Typically, they had only two symptoms remaining after four weeks. The most common symptom experienced by children with long illness duration was fatigue. As many as 84 per cent of children were reported with fatigue at some point in their illness, and this was the most persistent symptom.

Of the 1,379 children who developed symptoms at least two months before the end of the study period, fewer than 2 per cent experienced symptoms for longer than eight weeks, they noted. Older children in the 12 to 17 years age group were typically ill for longer than primary school aged children aged 5 to 11 years, according to the researchers.

Older children were also more likely to have symptoms after four weeks than younger but there was no difference in the numbers of children who still had symptoms after eight weeks, they said.

However, the study shows at four weeks, the small number of children with other illnesses tended to have more symptoms than those who were ill with COVID-19. “Our data highlight that other illnesses, such as colds and flu, can also have prolonged symptoms in children and it is important to consider this when planning for paediatric health services during the pandemic and beyond,” Michael Absoud, a senior author of the study and Consultant & Senior Lecturer at King’s College London, said.

This will be particularly important given that the prevalence of these illnesses is likely to increase as physical distancing measures implemented to prevent the spread of COVID-19 are relaxed, Mr Absoud said.

The study authors note some limitations to their findings. They could not cross-check the symptoms reported by parents and carers with health records, and there may be inconsistencies in the way people interpret symptoms on behalf of their children. Also, only children who had an adult who was participating in the COVID Symptom Study were able to participate, which may bias participation towards certain demographic groups, the researchers added.

World Breastfeeding Week 2021: What Should The Plate Of A Lactating Mother Look Like Amid COVID-19 Pandemic To Enhance Her Immunity?