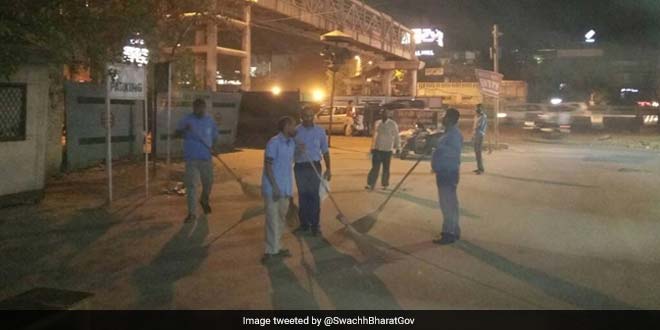 New Delhi: The South Delhi Municipal Corporation (SDMC) has begun the night sweeping in all its notified markets, as part of its Swachh Bharat vision, the civic body said on May 25. South Delhi Mayor Kamaljeet Sehrawat said a similar exercise will be undertaken in the morning and in the afternoon.

“Our corporation has started the night sweeping in its all notified markets with an aim to make the markets garbage- free in true sense. It as a step in the direction of intensifying cleanliness efforts in public places which are prone to collection of garbage due to substantial footfall,” she said.

The intensified efforts of sweeping will help in earning a better place in Swachta survey, she said.

She further stated that extra efforts will be made during Sunday and festival days to ensure cleanliness in the markets.

The Mayor also said that 5,000 dustbins in green and blue colours have been provided in the markets to promote segregation of the garbage.

She appealed to the traders, customers and visitors in the market to segregate the garbage and put segregated garbage in two different coloured dustbins.

There are more than 400 notified markets under the SDMC’s jurisdiction, it said.