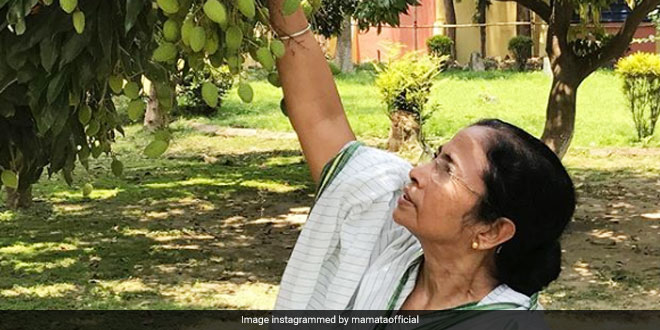 New Delhi: To mark the National Pollution Prevention Day on December 2, the West Bengal Chief Minister Mamata Banerjee urged people to adopt an eco-friendly lifestyle. She said, “Today is National Pollution Prevention Day. Let us strive to ‘save green, stay clean’”. She further informed that the West Bengal government has set up a six-member committee headed by the chief secretary to address environmental challenges in the state.

Today is National Pollution Prevention Day. Let us strive to ‘save green, stay clean’. In #Bangla, we have set up a six-member committee headed by the chief secretary to look into environment issues.

CM Banerjee who has recently joined Instagram, urged her followers to save trees.

The newly elected mayor of Kolkata, Firhad Hakim has also decided to work towards making the city pollution free. In a bid to motivate people to plant more trees, Mr. Hakim announced that people will be awarded tax rebates if they took up efforts to plant trees near their house, according to the Press Trust of India. He also stressed on waste management and recycling to keep the city clean.

Since the last month, Kolkata has been facing high levels of air pollution.On many occasions, the Air Quality Index (AQI) had even crossed ‘severe’ 400 in the past one month. The AQI in Kolkata recorded by Central Pollution Control Board (CPCB) on Tuesday was 344 at 3pm which is considered ‘very poor’ as compared to the CPCB’s recommended AQI of less than 100. The level of a harmful tiny pollutant called Particulate Matter 2.5 (PM2.5), which can lodge deeply in the lungs, has been several times more than the safe limit of 25 μg/m3 as prescribed by the World Health Organisation (WHO).

According to Vivek Chattopadhyay, an air pollution expert at the Centre for Science and Environment, the biggest cause of pollution in Kolkata is the coal and diesel consumption. He said,

Majority of the commercial vehicles use diesel and industries use coal. Current meteorological factors like lack of winds, decreasing temperature and increase in humidity are causing the accumulation of pollutants which results in the smog that these cities are facing now.

Recently, the National Green Tribunal (NGT) slapped a Rs. 5 crore fine on the West Bengal government for not complying with the anti-pollution measures recommended by an expert panel of NGT in 2016 to clean the air in Kolkata and Howrah. Those recommendations included introducing an alternative mechanism to put a lid on a high number of polluting diesel vehicles, introducing remote sensing device (RSD) to monitor smoke emission, increasing number of computerised air monitoring stations from the existing ones, introducing the system of allowing private vehicles with odd and even registration numbers on specific days in the week, monitoring entry of non-BS 4 (Bharat Stage 4) commercial vehicles to Kolkata and Howrah, stop burning of waste in dumping sites in different parts of the state.

National Pollution Prevention Day is observed in India on December 2 every year in the memory of the victims of Bhopal Gas Calamity. This catastrophic event took place on the same day in 1984 causing a loss of life of thousands of people and severely affecting many more due to exposure to the poisonous gas called ‘Methyl Isocyanate’ or MIC leaked from Union Carbide, a pesticide plant in Bhopal. The incident has been identified as the biggest industrial pollution disaster worldwide.

This day is observed with an aim to make the people and industries aware of the ways to manage and control industrial disasters, prevent the pollution produced by human negligence or industrial processes, prevention of the pollution of air, water and soil as well as to make people and industries aware of the importance of pollution control acts like Environment (Protection) Act of 1986, Air (Prevention & Control of Pollution) Act of 1981, Water (Prevention & Control of Pollution) Act of 1974, Hazardous Waste (Management & Handling) Rules of 1989, Chemical Accidents (Emergency, Planning, Preparedness, and Response) Rules of 1996, Municipal Solid Waste (Management & Handling) Rules of 2000, and Noise Pollution (Regulation & Control) Rules of 2000.