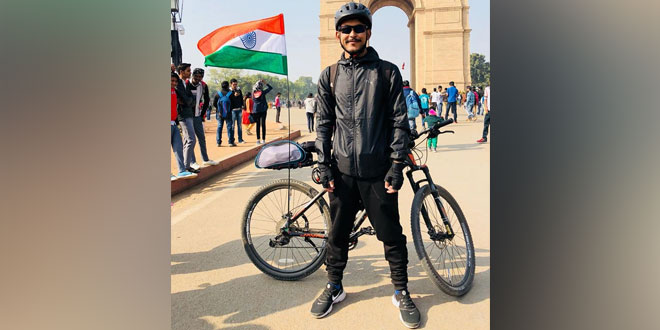 New Delhi: There are two kinds of people in the world- one, who rave and rant about all things wrong with the world and the other, who take on the challenge to act on it. 23-year-old Philem Rohan Singh falls in the latter category. He has embarked on a solo cycling tour from India Gate in the national capital to Imphal in Manipur to raise awareness about India’s air pollution crisis. Cycling roughly 2,500 km, Philem Rohan will cover a vast stretch of the country, from Uttar Pradesh to Bihar to West Bengal to Assam to Meghalaya.

I have been riding a bicycle from a very young age. The maximum I have gone is 500-600km per journey. So, cycling about 2,500km is huge. I have never done anything like this before. I hope I am able to accomplish what I have undertaken, says Philem.

The tour titled, “Pollution Free India And A Journey Taken With An Extra Mile” is centered around two themes, pollution in India, especially Delhi, where in 2015, 2.5 million people died  early because of pollution, according to The Lancet Commission on Pollution and Health and the other is about taking that one extra step, walking that one extra mile while leaving the struggles, pains, and all the sorrows behind. 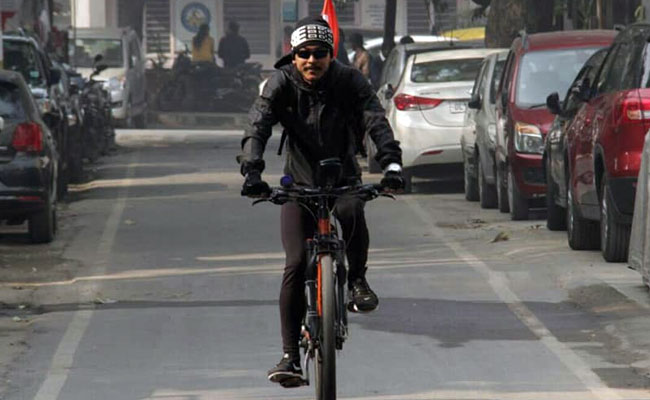 Philem, who has been living in Delhi from past 6-7 months, has been a victim of Delhi’s poor air quality. It is then that he decided to take a step and walk an extra mile for a pollution free India.

Post Diwali, when Delhi was covered under a thick layer of smog, I was here only. Because of the pollution I could not breathe properly and even go to the office. People could not see one another that were at shorter distance. Several complained of shortness in breath. Those couple of days shook me and made me take this decision, says Philem.

Philem wanted to start the tour then only, but due to high levels of pollution he could not. Later, in December, he decided to give his tour a green signal. After all the preparations and paper work like getting an official letter from the government of Manipur which can help him in taking help from police or any other organisation, he managed to start his tour on January 8, 2018.

I have planned to cover 100km a day, but it depends on weather conditions and sudden change in plans. Like, on my first day of the tour, I pedaled only 70kms. Today I might cycle more than 100km, says Philem.

Initially, Philem thought of just distributing fliers to the people he meets on his way. Now, he has decided to reach out to the younger generation by giving guest lecture in schools in Uttar Pradesh, Bihar, West Bengal and other regions. 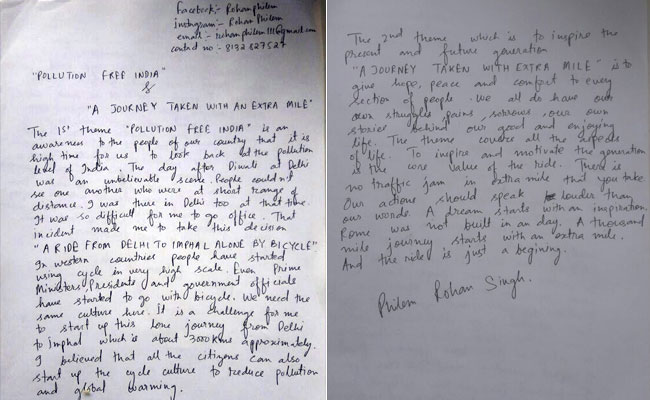 Randomly I will be picking two schools in every state I cross and there I plan to share my experience and the journey I am on right now. People, especially the young generation needs to be made aware of. Awareness might bring more Philem and cycle culture to reduce pollution, says Philem.

About the funding, Philem said,

That’s the worst part. I have not received any kind of financial support from any government or any organisation. As of now, the entire cost is borne by me. On January 8, I stayed at a hotel in Greater Noida. I paid the entire bill on my own. Though, the very next day I received a call from the manager asking for my account details as he wish to return my money.

Philem’s friends are his greatest support. From ₹500 to ₹1000, his friends have contributed in every possible way. His sister also performed to raise funds for his ride.

Because of the lack of funds, I don’t have many copies of the hand written fliers. If I meet a group of people, I give them just one flier and ask them to share the message with their friends and family, says Philem.

From having a decent job and leading a comfortable life to being the bearer of change, Phelim seeks to collaborate with organisations and government to raise awareness on India’s air pollution crisis. 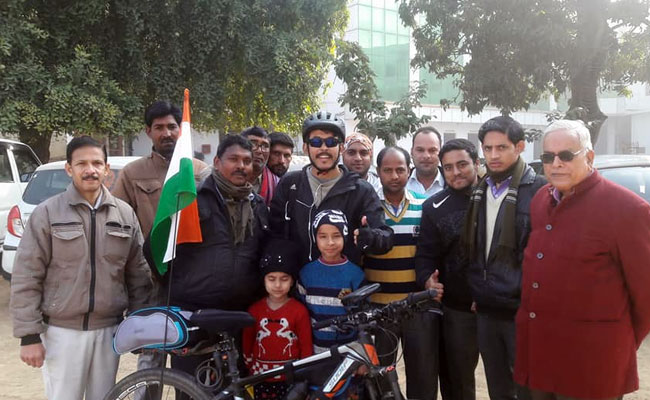 After this ride, if I receive positive response from people and if government is interested in collaborating with me, then I am all up for it. I don’t wish to blow the torch of change right after this tour. I aim to continue with it. This ride is not going to be a cakewalk rather a bumpy one and I am prepared for it, signs off Philem.

Also Read: Indian Cities To Come Out With Bike-Sharing Systems To Keep A Check On Air Pollution Levels

E-Waste On Continuous Rise In Delhi-NCR, By 2020 It Is Likely To Generate 1.50 Lakh Metric Tonnes Of Waste, Says Assocham Report

Nitrogen Dioxide (NO2), A Toxic Gaseous Pollutant, Rises In Delhi Despite A Decline In Diesel Consumption