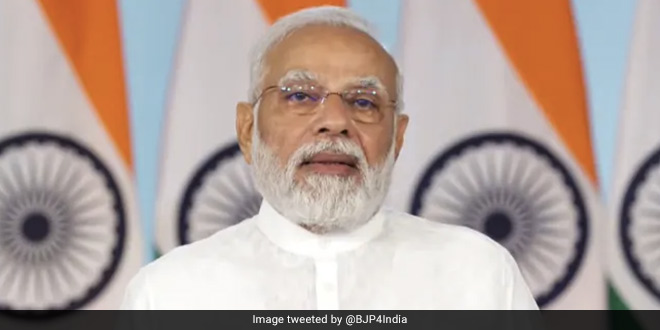 Everyone has to join this fight against malnutrition campaign, said PM Modi in his ‘Mann Ki Baat’

New Delhi: On August 28, Prime Minister Narendra Modi addressed the nation through his monthly radio programme “Mann Ki Baat”. Ahead of POSHAN Maah (Nutrition Month), celebrated in the month of September, PM Modi brought the nation’s attention to the problem of malnutrition. He began by talking about “Project Sampoorna” being run in Bongai village of Assam that addresses the prevailing issue of malnutrition among children. Through the programme, in just one year, malnutrition has been eradicated from 90 per cent of the children of the region.

In the 92nd episode of Mann Ki Baat, PM Modi explained how the women of Bongai village are putting up the fight. He said,

Under this, the mother of a healthy child from an Anganwadi centre meets the mother of a malnourished child every week and discusses all the nutrition-related information. That is, one mother becomes a friend of another mother, helps her, and teaches her.

Also Read: Number Of Undernourished People In India Declines To 224.3 Million; Obesity Among Adults On A Rise: UN Report

Under this, bhajan-kirtans were organised in the district, in which teachers who are called nutrition gurus were called. A Matka (pot) program was also held, in which women bring a handful of grains to the Anganwadi centre and with this grain, a ‘Bal Bhoj’ (Feast for Children) is organised on Saturdays. Besides this, there has been an increase in the attendance of children in Anganwadi centres and malnutrition has shown a dip. A unique campaign is also going on in Jharkhand to increase awareness about malnutrition. A snake-ladder game has been prepared in Giridih, Jharkhand. Through the game, children learn about good and bad habits.

Further, in his address, PM Modi said that he is sharing innovative and successful experiments related to malnutrition because every individual has to join this campaign in the coming month i.e., September. Many creative and diverse efforts are being made all over the country against malnutrition, he noted and added,

Better use of technology and also public participation has become an important part of the nutrition campaign. From providing mobile devices to millions of Anganwadi workers in the country, a Poshan Tracker has also been launched to monitor the accessibility of Anganwadi services. In all the Aspirational Districts and the states of the North East, 14 to 18-year-old daughters have also been brought under the purview of the POSHAN Abhiyaan.

Interestingly, the solution to the malady of malnutrition is not limited to the aforementioned handful of steps, he said. In this fight, many other initiatives also play an important role. PM Modi said,

Take the Jal Jeevan Mission – this mission is also going to have a huge impact in making India malnutrition free. Efforts for social awareness play an important role in tackling the challenges of malnutrition. I would urge all of you in the coming nutrition month, to take part in the efforts to eradicate malnutrition.

In March 2021, the UN General Assembly (UNGA) unanimously adopted a resolution tabled by India along with other countries including Bangladesh, Kenya and Nepal to mark 2023 as the ‘International Year of Millets’. With around four months left for 2023, PM Modi enlightened his listeners about the many benefits of millets. He said,

Millets are beneficial for the farmers and especially the small farmers. In fact, the crop gets ready in a very short time, and does not require much water either.

Delighted that Indian ???????? sponsored @UN resolution on “International Year of Millets 2023” was adopted by consensus in #UNGA this morning.

Big step to promote nutritional & ecological benefits of #millets to the ???? as a key component of food basket & effect policy changes – 1/2 pic.twitter.com/2PNAAS5vxM

Also Read: Honoured To Be At The Forefront Of Popularising Millets: PM Modi After UN General Assembly Adopts India-sponsored Resolution

Sharing the health benefits of millets, in order to promote its consumption, PM Modi said,

Millets contain plenty of protein, fiber, and minerals. Many people even call it a superfood. Millets have many benefits, not just one. Along with reducing obesity, they also reduce the risk of diabetes, hypertension and heart-related diseases. Along with that, they are also helpful in preventing stomach and liver ailments. We referred to malnutrition, just a while ago. Millets are also very beneficial in fighting malnutrition, since they are packed with energy as well as protein.

PM Modi urged farmers to adopt Millet and be rewarded in the form of health benefits. He lauded the start-ups working with millets and providing a basket of choices like Millet Cookies, Millet Pancakes and Dosa, and Millet Energy Bars, among others. He concluded by saying,

In this festive season, we also use Millets in most of the dishes. You must share the pictures of such delicacies made in your homes on social media, so that it helps in increasing awareness among people about Millets.