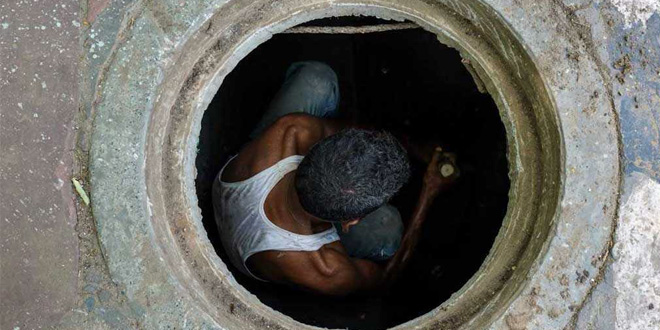 New Delhi: In a bid to stop frequents deaths of scavengers and ‘safai karmacharis’ during manual cleaning of sewers by them, the Delhi government has decided to provide them loans to purchase sewer cleaning machines.  Delhi government’s SC/ST Minister Rajendra Pal Gautam took the decision today while reviewing a proposal to rehabilitate 200 manual scavengers by procuring specially designed sewer machines, said a Delhi government statement.

“In a move to rehabilitate Safai karamcharis and manual scavengers, the Delhi government is ready to set a benchmark making them entrepreneurs by providing loans to own sewer cleaning machines,” it said.

To begin with, the government would be hiring 200 sewer cleaning machines each of which would provide job to four persons and thus create 800 jobs. The purchase of the machines would be funded by the State Bank of India, the National Scheduled Castes Finance and Development Corporation (NSFDC) and the Delhi State SC, ST, OBC Finance Development Corporation (DSFDC). The banks and financial institution would provide 95 percent of the cost as loan to each of the machine owners, the statement said.

Under the scheme, special attention is being given to the dependents of nine ‘safai karamcharis’ who lost their lives during manual sewer cleaning. It is proposed that in all such cases the margin money and individual contribution will also be arranged by DSFDC and NSFDC.  This model is based on public partnership with the Delhi government involving various stake holders like DSFDC, SBI, NSFDC, Dalit Chamber of Commerce and Industry (DCCI) and individual Safai Karmacharis. The machines would be operated under Delhi Jal Board, the government statement added.

Maharashtra Plastic Ban: Here’s How Pune Is Gearing Up For The Plastic Ban