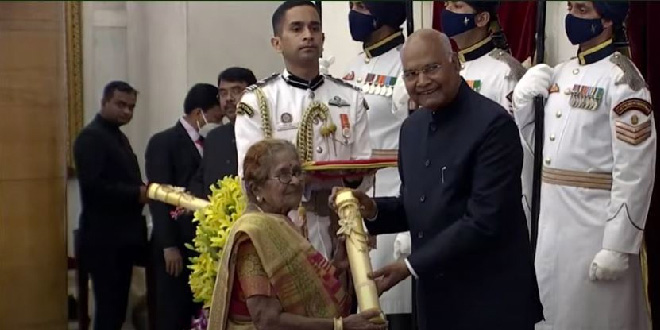 For her selfless and immense hard work, 93-year-old Prabhaben Shah from Daman was awarded Padma Shri in January 2022

New Delhi: Fondly known as ‘Daman ki Divya’, 93-year-old Prabhaben Shah from Daman and Diu was only 12 years old when she decided to become a social worker. She committed herself to feeding and clothing people and working towards women empowerment throughout her life. “What is life if lived just for one’s own self,” says Ms Shah who has been conferred the fourth-highest civilian award, Padma Shri this year for her selfless service and dedication towards helping those in need.

Ms. Prabhaben Shah from Dadra and Nagar Haveli and Daman and Diu has been conferred with #PadmaShri in Social Work category.

She is a veteran Social Worker. She has been working for women empowerment and the environment for over 6 decades. pic.twitter.com/svmqhVanQS

Talking about her journey, Ms Shah said that she was only 12-year-old when Mahatma Gandhi launched the Quit India Movement in 1942. It was then that she made a vow to help in the freedom struggle and participated in the movement led by Mahatma Gandhi. She continued to make contributions to society after India’s independence as well.

As it is difficult for Ms Shah to talk much, we spoke to her 54-year-old daughter Varsha Shah who shared more about her work and said,

“When my mother got married and moved to Bardoli, Gujarat with my father, she saw that there were no schools in the area. She wanted her own and other children to get an education and so she established a Gujarati-medium ‘Bal Mandir’ (primary school) for kids and formed an association of women for running the school.”

The women’s association (or Mahila Mandal, as she named it) that Ms Shah established in 1963 began its activities on various issues related to women and children apart from education. She said that the people around her had orthodox thinking and it was difficult for women to highlight the problems faced by them. So, she held a few meetings at her own house where women could express themselves freely and Ms Shah, who could not continue her higher studies, taught the women how to read and write and about basic healthcare like maintaining cleanliness, visiting a healthcare centre for medical issues and not ignore it among other things, through these dialogues.

Ms Shah and her team of women at the Mahila Mandal also established a credit organisation to provide loans to women who wanted to start small enterprises such as ‘papad’ manufacturing, tailoring, or running a grocery shop. Along with empowering women, the organisation also focused on other initiatives such as assisting the poor and the needy with food by running makeshift canteens and providing food to the family of patients at government hospitals. According to Ms Shah’s daughter, she has fed lakhs of people over the decades via her initiatives and the support of her Mahila Mandal.

They have also organised ‘Vastra Banks’ for donating clothes to the needy and those affected by disasters like the victim of the Bhopal Gas Tragedy in 1984, the Kutch earthquake in 2001, and the Kerala floods in 2018.

She went on to work on a variety of social issues, including education, women’s empowerment, health, natural disaster relief operations, and wars with neighbouring countries in the past seven decades of her life as a social worker.

According to her daughter, Prabhaben is very proud and moved to receive the prestigious award for her services. She said,

My mother, who is an inspiration for us and many others, says that this award belongs to every individual who supported her work over the past eight decades. We all are very proud of the work that she has been doing. We have seen many young women find livelihood and purpose in life because of her efforts. I and my husband have been lucky to be able to be a part of my mother’s wonderful journey.

Related Topics:
Gujarat Health Leaving No One Behind Nutrition
Up Next