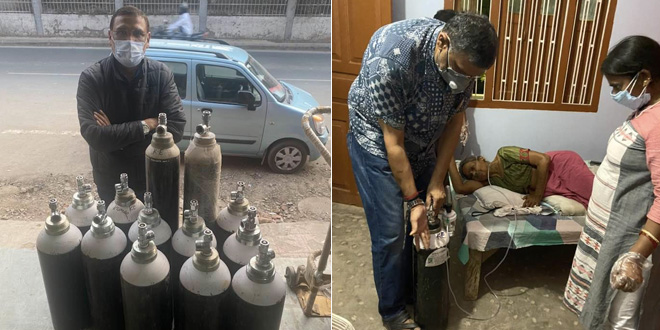 New Delhi: In July 2020, he was hit by COVID-19. When the situation worsened and his oxygen saturation level dropped, he visited several hospitals but the medical oxygen was found only in one. As there was no bed available, he was given oxygen in a make-shift arrangement while lying on the ground beside a sewer outside a government hospital in Patna. As his health kept deteriorating, he felt ditched by the system and his friends who ignored his plea for help. He decided to go back home and wait for death. The next day his wife arranged for three oxygen cylinders somehow and his life was saved. This prompted him to do something about the lack of essential medical facilities in the capital city of Bihar. He decided to focus on tackling the issue of the oxygen shortage and so, he started an oxygen bank along with his wife.

This is the story of 51-year-old Gaurav Rai, a resident of Patna, Bihar who is now fondly known as ‘Oxygen Man’. Mr Rai strives to get oxygen to the needy free of cost. In his new journey along with his wife Aruna Bharadwaj, he found support in some of his friends living in the United States of America, people working in his office, strangers on social media and Bihar Foundation which is an autonomous body formed by the Department of Industries, Government of Bihar in 2010, which seeks to reach out to non-resident people of Bihar. While talking to NDTV, Mr Rai said,

My life was saved because of some hours of oxygen supply. I do not want anyone to die due to the lack of oxygen. I started this journey with three cylinders that my wife had arranged. Gradually, some doctors and citizens came forward and donated cylinders. While I was serving the people in Patna, the word got out and a friend of mine in the USA sent me 200 cylinders through Bihar Foundation. 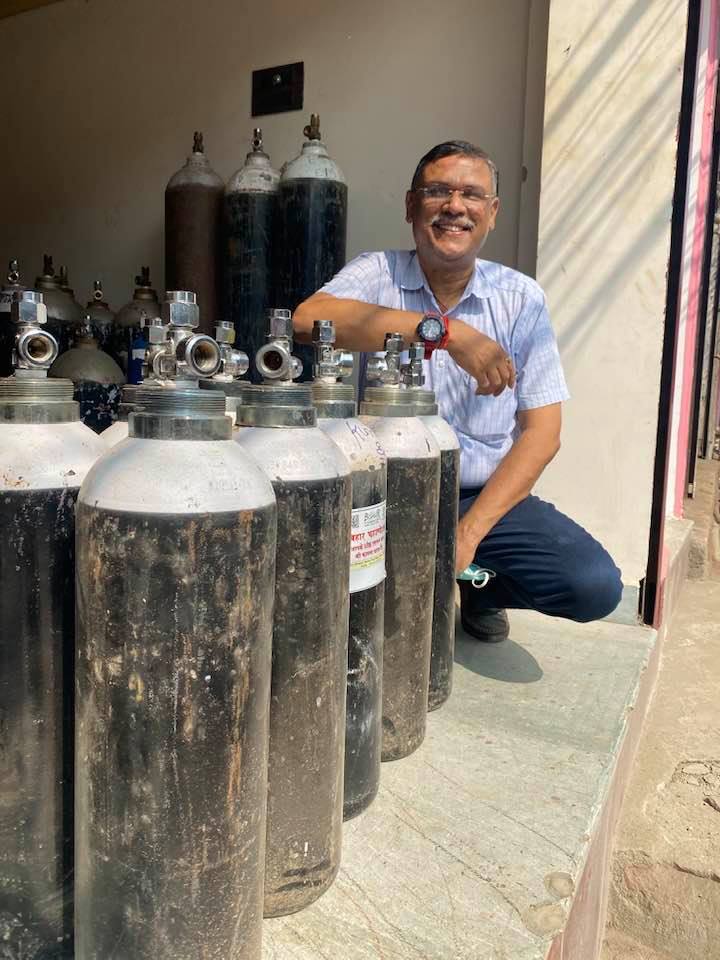 Manager in a private company, Mr Rai now has 255 oxygen cylinders of 10 kilograms each. On buying, maintaining and delivering oxygen cylinders that cost about Rs. 7,000 each, Mr Rai has spent over Rs. 5 lakh of his own savings and has been able to gather about Rs 7 lakh as donations from others. He has provided oxygen cylinder to 1,714 patients so far. Out of those, 32 died in the first wave last year and 96 succumbed to the deadly virus during the second wave. Rest all have recovered, he said. While in Patna, Mr Rai delivers the oxygen cylinder to the patient’s house himself, in other districts the service is being provided through Bihar Foundation. Mr Rai said he gets the empty cylinders filled from a generous dealer located in Patna for a modest Rs. 200 each.

Whatever time I get after office, I am engaged in serving the people. During these unprecedented times, even during office hours, I respond when people reach out to me for help. If possible, I go and deliver the cylinder myself but when I am unable to go, I call them to my office where I give them the cylinder and also show them how to install and use it. I have also trained some of my office staff members and guards at my residential building on operating an oxygen cylinder. They help me on a regular basis. My blue WagorR in which I keep at least 5-6 cylinders at all times has now become quite famous among people in Patna. Apart from COVID patients and their families, I also get calls from hospitals for oxygen cylinders.

In order to avail the oxygen cylinder service, one needs to simply contact him on WhatsApp or via social media. To ensure that oxygen cylinders are being given to those who are actually in need and not hoarders, Mr Rai insists on a doctor’s prescription. At present, 72 patients are on oxygen provided by him. He said that wherever he delivers oxygen, he reaches their house again after the patient is cured. This time, with a cake in his hands, to celebrate their recovery and to help them realise how important it is to help save someone’s life.

Also Read: From Delhi, Andhra Pradesh To Bihar, ‘Yamraj’ Hits The Streets Of India To Create Awareness About Coronavirus

For 20-year-old Neha Gupta, Mr Rai was a God sent who helped her father recover from COVID-19 She said,

We were struggling to get a hospital bed and were extremely scared that we might lose our father to this pandemic. I got Mr Rai’s phone number from somewhere and he willingly agreed to bring an oxygen cylinder to our house. He explained to us the procedure of using the oxygen cylinder in an efficient manner. He gave our father a new life. We cannot thank him enough.

Preeti, whose husband was saved because of the timely help received from Mr Rai, said that he was nothing less than an angel, a superhuman. She said,

Gaurav bhaiya (brother) helped us in the worst hour of our lives. We can never forget how enthusiastically he came to our house with an oxygen cylinder and motivated us to believe that good things will happen. He is still in touch with us. People of Patna will remember him for years to come.

Challenges Faced While Serving Those In Need

Talking about the challenges being faced on a daily basis while trying to serve those in need, he said that there have been some instances of misuse by not returning the cylinders or causing damage to its parts. Mr Rai said that out of all the people he helped during the pandemic, 57 refused to return the cylinder. It took a lot of convincing, time and energy to get 35 cylinders back but 22 are still stuck with patients who have recovered but are not ready to return the cylinder.

Mr Rai also shared that because of the sudden increase in demand for oxygen in the second wave, it has become difficult for him to procure new cylinders or flow meters, breathing pipe and other parts of the cylinder. Appealing to the administration to take a strict stand on the unreasonable prices at which the cylinder and its parts are available for right now, Mr Rai said,

Do Not Lose Hope, Life Has A Purpose, So Make The Most Of It: Mr Rai

When the capital city of Patna was scrambling with the flood in October 2019, Mr Rai was actively helping people hit by it. While being on the ground during the floods, he contracted Dengue and then became a victim of paralysis due to which he lost his voice completely. It was during this time that Mr Rai even contemplated suicide.

It was the most difficult time of my life. I had given up completely. I attempted to commit suicide but at that moment it hit me that there are so many people in the world who are living with many types of disabilities. Maybe I should also try to overcome this challenge. My voice came back after some months and even though it is not fully recovered, I am extremely grateful for my life. I do not know how many years I have with me now but what I do know is that all those years will be spent doing whatever I can to help others and celebrate life. Each life has its own purpose. So, we must make the most of it and never lose hope.

Apart from helping mitigate the issue of lack of oxygen, Mr Rai also organises food distribution frequently. Earlier, before the pandemic hit the country, in his quest to serve people, Mr Rai installed sanitary napkin vending machines in seven government schools in and around Patna. His target is to ensure that there is a sanitary napkin vending machine in all government schools of Patna. Not only this, every month Mr Rai distributes cycles to two girls from poor households. He has decided to dedicate the savings of his late father to the service of those in need. Mrs Bharadwaj, his wife, who works in an insurance company also donates a part of her income per month towards the philanthropic work undertaken by Mr Rai.

Also Read: 1-20 Age Group Accounted For Less Than 12 Per Cent Of COVID Cases In Both Waves: Government

India Needs To Be Well Prepared For The Third Wave: Cardiologist Devi Shetty