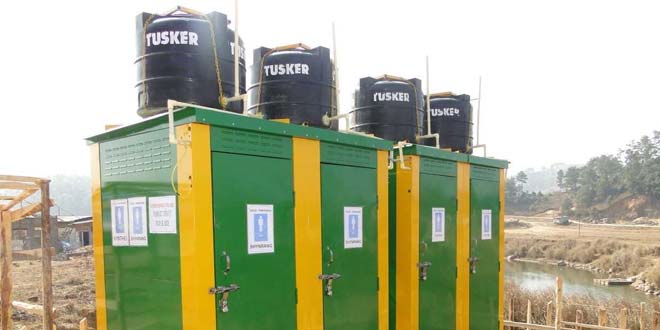 New Delhi: Challenges in India’s sanitation scenario vary from region to region and for states in the north eastern India, one of the major challenges faced is the uneven topography of the region which makes installation of toilets difficult. The geographical handicap has however not stopped north eastern states from boarding the Swachh Bharat Abhiyan bandwagon, as the seven sister states are active in implementing the mission’s objectives. Meghalaya in particular, has been an excellent performer and with over 1.91 lakh rural toilets, is nearing open defecation free (ODF) status. As an icing on its ODF endeavours, Meghalaya has also become the first north eastern state to install prefabricated toilets in the West Khasi Hills district, and has launched an extensive campaign for bio-toilets to be installed in public places and highways in the state.

The toilets, green and yellow in colour, are premium prefabricated modular toilets from Tata Steel, 7-feet in height and made of steel. The durability of the toilets make them perfect for installations across public places and highways, so that they can be used by commuters. The toilets are functional on the basis of twin-pit technology, which converts the faeces into usable manure within six months. The toilets also have a hand washbasin attached to them and a ramp for people with disability.

While household toilets are definitely assets, one must also think of what people would do when they needed to relieve themselves in public places, or while traveling. These toilets are easy to install and maintain, thus saving time and cost for the government. We have presently installed two such toilets in Markasa and Kynshi Bangla to see how public response to them is, said Arunkumar Kembhavi, Deputy Commissioner, West Khasi Hills District.

Mr Kembhavi said that the initiative of installing prefabricated toilets will help check open defecation in the district and aid especially women and the differently abled to access toilets. The district administration plans to install more such toilets in weekly markets, football grounds, colleges and anywhere people gather together for any activity on a regular basis and may need to access toilets. Market associations, schools or colleges interested in installing bio-toilets have been asked to contact the Deputy Commissioner’s office. Associations and villages willing to install bio-toilets must get into an agreement for maintenance of the toilets, and must take responsibility to maintain the toilets. The agreement also states that the bio-toilets must operate on the basis of charges collected from those who use them.

It is very important to maintain the toilets for cleanliness as they will be used regularly by a number of users. A user will be charged Rs 2 per use every time he/she uses the toilet. The collected amount can be used to clean the toilet regularly. Often public toilets are highly unclean and hence become unusable. We do not want that to happen to these bio-toilets, said Mr Kembhavi.

The West Khasi hills district has been instrumental in implementing Swachh Bharat Abhiyan’s objectives. The district has already achieved 100 per cent coverage as far as individual household toilets are concerned. In the waste management arena, the district has involved school students for weekly cleanup programmes and ensured that the district is garbage free. With the installation of bio-toilets, West Khasi Hills becomes one of Meghalaya’s first districts to focus on public sanitation, a lesson other districts can emulate.

Also Read: India, Take A Cue From Madhya Pradesh. The State Is The First To Achieve 100% Door-To-Door Garbage Collection