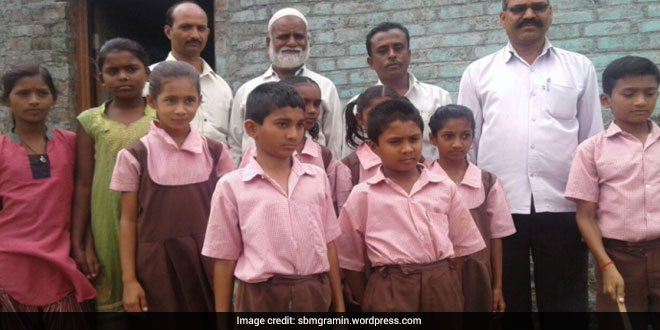 New Delhi: A month back, 42-year-old Mahadev Tambe, a resident of Lohara gram panchayat (GP), Osmanabad district, Maharashtra, had been ordered to be present in the court for committing a crime. As the court initiated the proceedings, Mahadev was so embarrassed that he couldn’t even look into the eyes of the presiding judge. “The court finds Mahadev Tambe, who owns a toilet, guilty of open defecation and as his punishment he has to clean school’s toilet for a week,” said the 14-year-old judge, who also happened to be Mahadev’s son.

No, this is neither a scene of a Swachh Bharat Abhiyan ad or movie. This is Osmanabad’s latest initiative under Swachh Bharat Abhiyan to eliminate open defecation in the district. The cleanliness mission, started in 2014, has seen ample number of unique and creative campaigns to maximise citizen participation and Osmanabad seems to be succeeding in engaging its citizens.

In October 2017, the district administration had introduced the concept of ‘Vidyarthi Swachhta Nyayalay’. Under this initiative, people who are found defecating in open are given a written notice by the ‘Good Morning’ squads and are asked to appear in the student’s court.

The court comprises 8-9 students of which three form a judge’s panel. One is appointed as a prosecutor and the rest overlook the overall functioning. The court is formed by the headmasters and teachers of schools in the gram panchayat. And only students who have a toilet at home are eligible take part in the initiative. The selection is done on merit and only if they pass the sanitation test, they get selected. Questions on safe sanitation practices and ill-effects of defecation are part of the test.

Under the ‘Vidyarthi Swachhta Nyayalay’, the cases are presented every Saturday. Punishments range from sweeping school premises, making others aware of sanitation practices to cleaning public toilets. Incase the offender fails to complete the task given, a small fine is imposed. Offenders are also asked to take an oath of swachhta and practice safe sanitation in future.

So far, the student courts have recorded over 50 cases from all its eight panchayats. Talking about the effective change swachhta courts have made, Pankaj Jadhav, Zilla Swachh Bharat Prerak, Osmanabad, says,

“The courts have helped us identify people who defecate in the open despite having a toilet at home. In cases, where offenders don’t have a toilet, they notify the administration for special focus on these families and help them build toilets. The concept is changing people’s mindset especially because the teachings come from their own children or neighbour’s children. Instead of feeling humiliated, the offenders feel proud to see their children extensively contributing in the clean India mission. With the kind of response we have received, I feel such courts should be established all over the country.”

Interestingly, the contribution of children in making Osmanabad open defecation free (ODF) isn’t limited to just the court proceedings. The ‘Good Morning Squads’ that act as an inspecting body, also consist of children. School children from standard 5-10 take rounds regularly in the wee hours of morning in open defecation prone areas. If they spot anyone relieving in the open, they form a circle around the person and sing ‘Bapu/amma tu to gaav sehat ke liye hanikarak hai’ (You are a threat to the entire village’s health condition) and hand over the written note.

This isn’t the first innovative action taken by the district to curb open defecation. Last year in July it had dug more than 10,000 toilet pits in less than 24 hours and 10,000 households had a toilet the next week.

Also Read: You May End Up Paying A Hefty Amount If You Spit, Defecate, Or Litter In Public Places In Maharashtra

First Time In India, A Kachra Mahotsav Is Being Held In Raipur To Instill Habit Of Recycling Among People