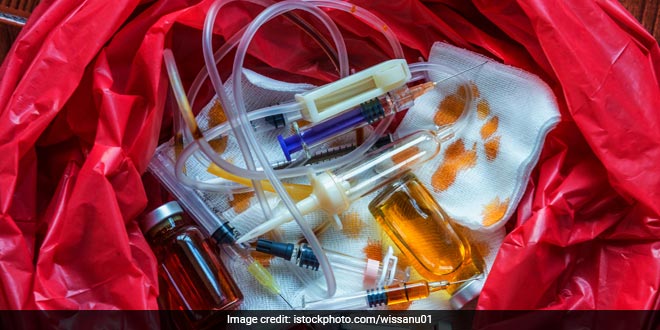 New Delhi: The National Green Tribunal (NGT) has sought response from the Institute of Human Behaviour and Allied Sciences (IHBAS) and others on a plea alleging that the hospital was recklessly handling bio-medical waste and causing air pollution by burning garbage in the open.

A bench headed by NGT Chairperson Justice Swatanter Kumar issued notices to the IHBAS and its director, Delhi Jal Board, Delhi Pollution Control Committee, Central Pollution Control Board and sought their reply before June 15.

The order came on the plea filed by a city resident, through advocate Siddhartha Singh, claiming that IBHAS was violating the Bio-Medical Waste Management Rules, 2016 and improperly handling the waste generated during patient care.

The plea has claimed that segregation of waste in IHBAS was not satisfactory and storage of bio-medical waste is not done in isolated area and proper hygiene is not maintained.

It has alleged that rag pickers are allowed unauthorised transportation of waste by the hospital through routes passing through patient care areas.

Mr Singh has also sought imposition of fine or penalty on IBHAS for the damage caused to the environment. IBHAS does not have an operational sewage treatment plant and no proper waste treatment and disposal facilities are available at the hospital, the petitioner said.

Direct the respondents to seal all the illegal bore- wells running in their premises to stop further destruction of soil of the land and deconcretise all trees immediately with help of experts in the field, the plea said.