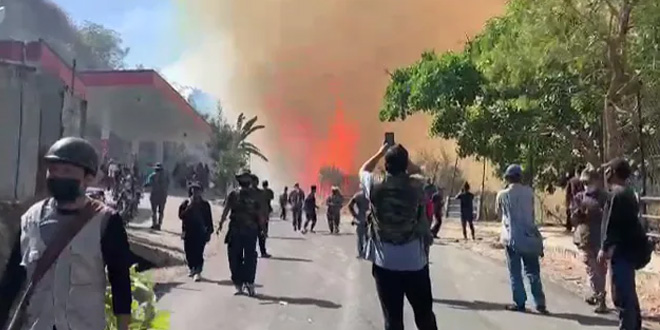 Aizawl: Mizoram Chief Minister Zoramthanga on Monday (April 26) thanked Prime Minister Narendra Modi for assuring all possible support from the Centre in overcoming the wildfire in Lunglei and Lawngtlai that broke out on April 24 and has been raging on since then. In a tweet, CM Zoramthanga said, “Thank you so much Prime Minister Narendra Modi ji. I thank the Central Government for its prompt assurance and swift action. The people of #Mizoram says ‘Kan lawm e’. Inset: IAF Helicopter with Bambi Buckets on their way to douse the fire.”

Thank you so much Prime Minister Shri @narendramodi ji. I thank the Central Government for its prompt assurance and swift action. The people of #Mizoram says 'Kan lawm e'

Inset: IAF Helicopter with Bambi Buckets on their way to douse the fire. https://t.co/tJpyW0nk5O pic.twitter.com/Pj7h2W7Ymk

This comes after Prime Minister Modi had a conversation with Mizoram Chief Minister Zoramthanga and assured all possible support from the Centre in overcoming the crisis.

“Spoke to Mizoram CM, Mr Zoramthanga and took stock of the situation arising due to forest fires in parts of the state. Assured all possible support from the Centre in overcoming this crisis. We all pray for the safety and wellbeing of the people of Mizoram,” PM Modi tweeted.

For more than 32 hours now, a forest fire has been raging in the hills of south Mizoram, spreading to towns and villages of two neighbouring districts, Lunglei and Lawngtlai. Firefighters from the state government, with the help of Assam Rifles and Border Security Force (BSF) personnel and local volunteer groups, have been trying hard to put the fire out, authorities said.

On Sunday (April 25) evening as the fire continued to burn, the Indian Air Force (IAF) — requisitioned by the Mizoram government — deployed two Mi-17V5 helicopters, equipped with specialized Bambi Buckets, to control it.

“On the requisition of the State Government of Mizoram, @IAF_MCC is deploying two Mi-17V5 helicopters, equipped with Bambi Bucket, to douse the major fire in Lunglei district and adjoining areas,” PRO Shillong, Ministry of Defence had tweeted on April 25.

According to the state government officials, the fire reportedly started at 7 am Saturday in the forested hills near Lunglei town. By Sunday, it had not only affected 10 village council areas within Lunglei town, but also spread to three rural development blocks of Lawngtlai district.

Also Read: There Is No Planet B, It’s Time We Take Actions To Restore Our Earth, Five Things You Need To Know

Related Topics:
Environment Mizoram
Up Next