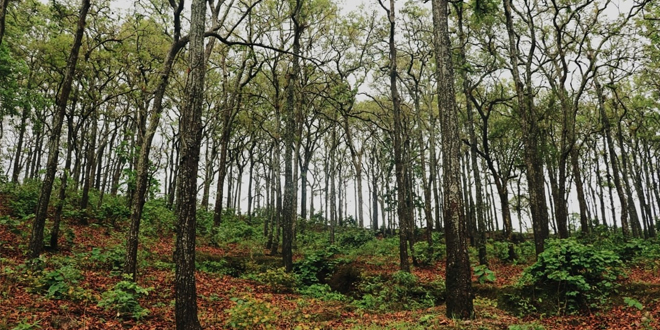 New Delhi: 33-year-old, Vikash Ujjwal, 2014-batch Indian Forest Officer (IFS) has been working in Jharkhand region for over six years now. Being born and raised in Jharkhand, Mr Ujjwal is well versed with the geography of the region, challenges posed to forest dependent communities, and forest fires and their impact on biodiversity. Lately, forests around the world have been witnessing severe instances of forest fires and Jharkhand is no exception. During his work in Lohardaga Forest Division as a Divisional Forest Officer, Mr Ujjwal realised that a forest patch of 500 sq. km had turned into a forest fire hotspot.

As a forest manager, three to four months of forest fire season are a nightmare for us. Every year surface fire – a most common type of forest fire that burns on the surface of the ground – would take place and we would try dousing it the traditional way – beating bushes and tree branches. This was a post-mortem approach and whatever response was meted was after the damage had already been done, said Mr Ujjwal.

In April 2019, during one regular forest fire, a wild bear ventured out of the forest and entered a nearby village and in an unfortunate event, one person died and many were brutally injured because of the conflict with the bear. To put an end to this, Mr Ujjwal found a solution that has not only eliminated major forest fires but has also created jobs for villagers.

What Causes Forest Fires In Jharkhand?

In Jharkhand’s Lohardaga, Gumla and Latehar region, in January, trees shed around 2,200 kgs of leaves per hectare and in the peak season that is in April, one hectare of land collects 4,000 kgs of leaves. Explaining the reason behind the shedding of leaves, Mr Ujjwal said,

Jharkhand and more particularly central India has Dry Peninsular Sal sub type of forest. When there is low moisture in the atmosphere, these trees shed leaves to minimise evapo-transpirational loss that is to conserve moisture in the plants until monsoon. 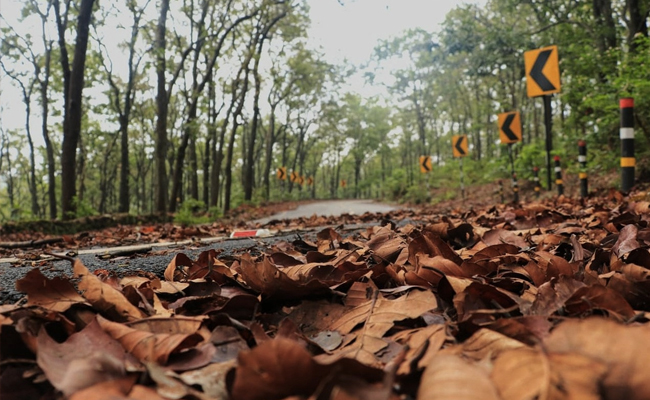 In Jharkhand, fry fallen leaves act as a fuel for forest fires

According to Mr Ujjwal, for forest dependent communities, dry fallen leaves are a waste and something that comes in the way of their livelihood which is why they burn leaves that cause forest fires. There are four main reasons villagers burn leaves, said Mr Ujjwal while explaining in detail:

Mahua Collection: Mahua flowers and fruits are a source of livelihood for the local community. The villagers burn fallen leaves so that wihen Mahua flowers fall on the ground, they don’t hide in the heaps of dry leaves. It is an age-old practice here, said Mr Ujjwal.

Preparing Grassland: People who have cattle need grassland for the herd to graze on so they create surface fire. Blackened fields make it conducive for grasses to revive on the land as and when there is a downpour.

Encroachment: Encroachment of forest land for agriculture or to meet the daily requirement of fuelwood and timber is a common practice. Squatters often cut and sell trees and woods illegally.

We make a mistake in assuming that a forest fire will only affect the forest and wildlife and not human beings. Such fires break the forest ecology; hardly anything is left for flora and fauna to flourish. As a result, wildlife migrates towards human habitations resulting in human-wildlife conflicts, poaching, and road-kill, said Mr Ujjwal. 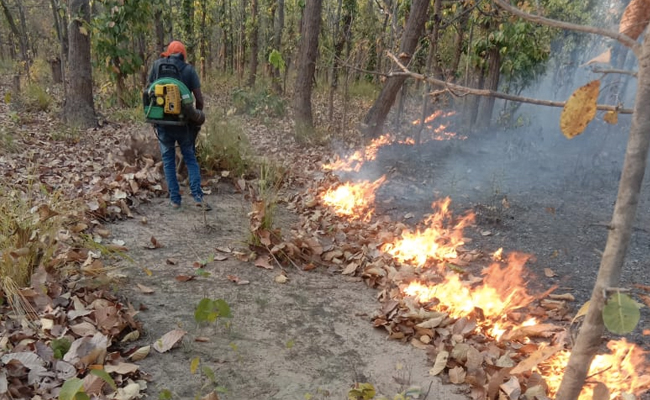 In Jharkhand, forest dependent communities burn fallen leaves to clear the ground but that results in forest fires

The unfortunate incident that happened in April 2019 triggered Mr Ujjwal to find a way to stop forest fires and protect the environment. Fire has three components – heat, oxygen and fuel. While one cannot control the heat and availability of oxygen in the environment, one can divert the availability of fuel – here it is dry leaves. To begin with, the team pulled out the data of the last 10 years of forest fire hotspots and found that 5,000 hectares of area is very vulnerable to fires. The area was demarcated and a plan involving the community was made.

Human resource is the only resource we have in plenty and we devised a mechanism where removal of dry leaves would bring money. Our idea was to collect those leaves from the vulnerable forest floor and convert them into briquettes – artificial fuelwood, explained Mr Ujjwal.

Initially, as it happens with every new idea, it had very few takers. Locals from 13 nearby villages were not ready to believe that dry leaves could be converted into wood and something that would increase their incomes. The team had to give a practical example to win the trust and win the support of the local community. For the same, the forest division along with the district administration installed a machine in the Tisiya region to convert dry leaves into briquettes.

Since people understand the language of economics better than the language of conservation, we devised a model wherein local people are paid Rs. 2 per kg for bringing dry leaves from the vulnerable forest floor to the processing centre. Briquetting machine accepts only leaves and agri-residues; no branches or twigs are accepted so as to refrain people from cutting trees and in turn, prevent any adverse impact on forest. Fallen twigs and branches are left on the ground for composting, informed Mr Ujjwal. 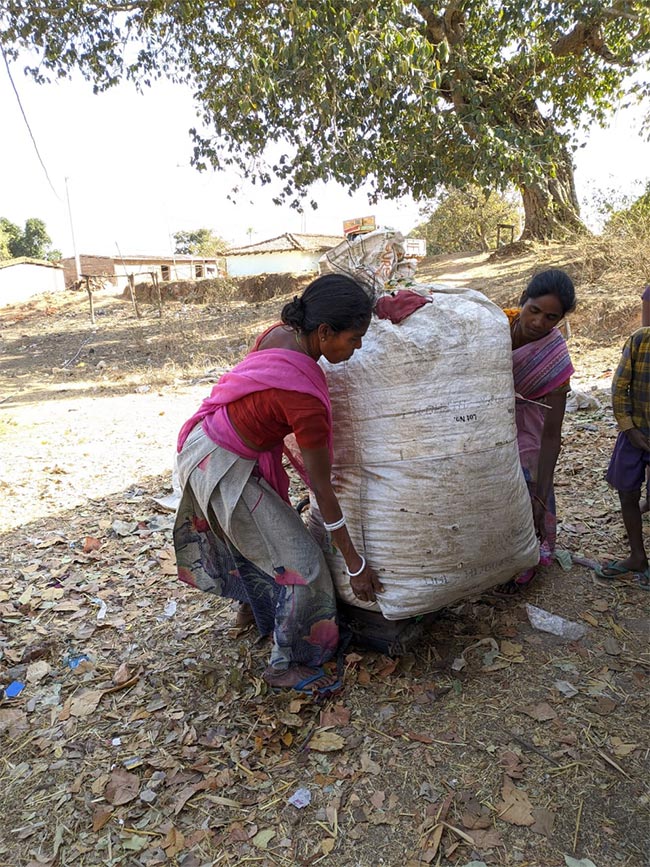 Villagers have been given the task to collect dry leaves from the vulnerable forest floor and are paid Rs. 2 per kg

Gradually, people understood that there is a scope of waste to wealth that can also eradicate forest fires in their region. Rahil Munda from Salaiya village is one of the beneficiaries of the project. She earns Rs. 1,500 to Rs. 2,000 a week by collecting fallen leaves. Ms Munda said that earlier she used to cut and sell wood and take odd jobs which would fetch her Rs. 800 to Rs. 1,200 a week.

The whole management of the briquetting plant has been placed in the hands of the local Joint Forest Management Committee (JFMC) comprising of 15 people from nearby villages.

Locals here illegally cut natural fuelwood and sell it in the local market. If we want to create a market for artificial fuelwood, we need to take existing buyers into confidence. So, we did a survey and called a meeting of potential buyers – brick kiln owners, rice mills’ owners, tea vendors and others and strictly informed them that illegal cutting and selling of fuelwood will come down heavily on them. They will have to purchase briquettes, said Mr Ujjwal.

The briquetting plant has the capacity to process about a tonne of leaves per day. Around 400 villagers, mostly women are engaged in collecting leaves from the demarcated forest area in this fire season earning upto Rs. 300 a day. The briquettes are sold at Rs. 5 per kg and the local community has received orders for over 100 tonnes of artificial fuelwood. 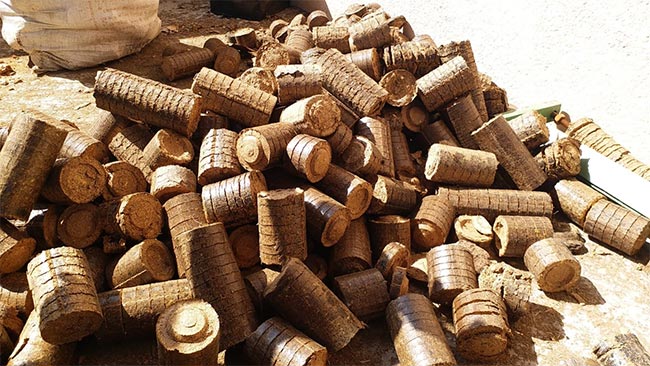 For the first time in many years, the forest around Tisiya has not witnessed any major fire. Villagers know that they will get money only when there will be dry leaves and for that, a forest needs to have trees. The process of attaching a monetary value to fallen leaves has resulted in a great reduction in instances of illegal cutting of trees and fuelwood, said Mr Ujjwal.

Leaf shedding continues till June but the villagers have been asked to collect leaves only till May and let the last fall sit on the ground till monsoon so that water retention happens. The state government is now thinking of replicating this model in all 24 districts of Jharkhand.

This year, Mr Ujjwal was transferred to Ranchi as Divisional Forest Officer Monitoring but he says that he still visits the forest area and often gets calls from locals telling him how well the initiative is working and how it has resulted in an additional source of income. While signing off, Mr Ujjwal said,

This not only aims at tackling the dual menace of forest fire and illegal felling for fuelwood from the forest but also provides livelihoods to forest dwellers. This has conservation at its core but employment at its interface. We have to look into solutions where we can engage with the community by providing livelihood.

Also Read: 50,000 Trees Saved And Agricultural Waste Prevented From Burning By This Nagpur Warrior, Here’s How

Related Topics:
Environment Jharkhand
Up Next

Vehicle Scrappage Policy: Is India On The Right Track To Ensure Clean Air For All?