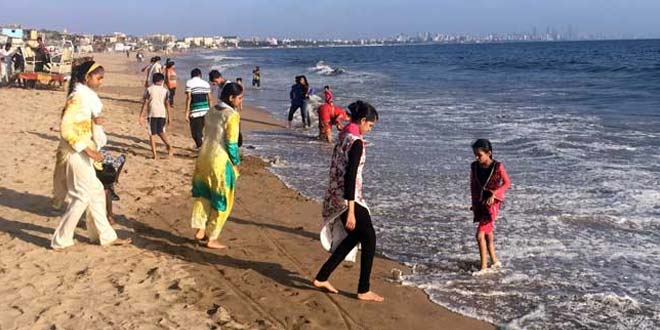 Mumbai: A picture shared on Twitter of Mumbai’s Versova beach shows what difference it makes when citizens come together to clean their locality or beach.

Versova beach, located in north-western Mumbai, was one of the dirtiest beaches of the city before the locals decided to clean up the filth. In 85 weeks, the beach underwent a massive makeover – five million kilograms of plastic and filth was removed — with the help of India’s richest civic body, the Brihanmumbai Municipal Corporation or BMC, and citizens.

Unrecognisable at the first glance, the beach now looks much cleaner than before. Not just locals, but many actors and even a plastic association had contributed to this mammoth cleanathon.

Leading the effort is a 33-yeard-old lawyer from Bombay High Court. Afroz Shah, when not on duty, organises volunteer camps to clean the beach.  After success with Versova, he plans to do the same with other beaches too.

Also Read: Can Mumbai Save Its Dahisar River?

I always call it a date with an ocean. So when you are on a date, you are mentally at your best and physically at your best. And that’s what I do with the ocean, Mr Shah told NDTV.

Mr Shah now wants the locals to spare two hours every week to change the face of the city’s beaches. If Versova can be cleaned, so can the other beaches, he said.

A BPO employee Ankita Godse told NDTV, “Previously I have visited many beaches in Mumbai but this is the one beach which I feel is the cleanest of all. Previously there was a lot of trash like beer bottles and all.”

I am visiting this place for the first time and I find it cleaner than places like Juhu and all, her sister Ruchira added.

Plastic is something everybody is grappling with. How wonderful that all stakeholders come together and work it out. The local municipality, the BMC, citizens, all worked together to protect the environment and ocean, Mr Shah said.

The United Nations is now going to officially join this citizens’s programme on World Environment Day and awarded Afroz Shah for his efforts.