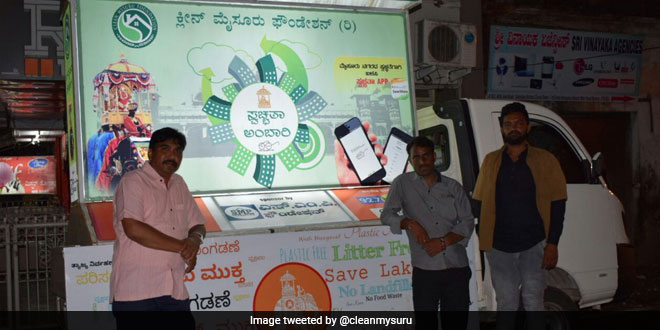 New Delhi: Sustaining cleanliness is as important as achieving the Swachh target and civic bodies across India are coming up with innovative measures to sustain their clean statuses. Mysuru, which was recently recognised as the cleanest medium city (southern zone) in the Swachh Survekshan 2018, has rolled out Swachhata Ambari, the cleanliness vehicle that will move around the city and educate citizens on cleanliness and waste management. Developed by the non-profit organisation Clean Mysuru Foundation, the vehicle is slated to visit every nook and corner of the city and encourage citizens to continue to keep their surroundings clean.

The vehicle, a customised and modified mini-truck has been fitted with LED screens that display messages and videos related to Swachhata. It costs an estimated Rs 11,000 daily to operate the vehicle. Given the high costs, the MCC is presently operating only one vehicle and is on the lookout for sponsors so that a few more vehicles can be rolled out in different parts of the city.

The launch of Swachhata Ambari has been initiated under information, education and communication (IEC) activities undertaken by the Mysuru City Corporation (MCC). The idea of a vehicle going around was discussed by the MCC in October last year and the vehicle was launched on a pilot basis. Based on the positive responses received, the MCC has decided to go ahead with the vehicle roving around the city with videos, photos and audio messages on cleanliness and waste management playing continuously. The vehicle can be modified to display messages related to special occasions, such as including video messages encouraging people to avoid buying Ganesh idols made of plaster of paris on the occasion of Ganesh Chaturthi.

We started this programme in October last year and the idea of a vehicle going around the city spreading messages on Swachhata resonated well with people. Seeing the success, we worked further on the vehicle with Clean Mysuru Foundation and included more messages and videos so that people become aware of their cleanliness responsibilities, said K.H. Jagadeesh, Municipal Commissioner, Mysuru.

Apart from creating awareness on cleanliness, the Swachhata Ambari also encourages people to use the Swachhata app launched by the Ministry of Housing and Urban Affairs in December last year. Using the Swachhata app, people can notify their local civic bodies about unclean places, irregular waste collection and open defecation. Swachhata Ambari aims to bring people closer to the civic body so that they can keep the MCC updated about irregularities throughout the city.

“The main agenda of Swachhata Ambari is to bring in behavioural change. Many people do not know about the Swachhata app and how useful it can be to make the city cleaner. People can simply download it and use it to report any irregularity in cleanliness around them. Using Swachhata Ambari, we are reaching out to more people and urging them to maintain the cleanliness that Mysuru has been rewarded for in surveys,” said S Madhukesh, Secretary of Clean Mysuru Foundation.

The MCC plans to screen four to five video messages daily, two to three minutes in length, on various topics. The priorities will be waste segregation, eradicating littering, encouraging people to use public toilets and requesting them to stop using plastic. Mr Jagadeesh said that 90 per cent of Mysuru’s bulk waste generators have stopped discarding waste and taken to composting and recycling. The municipality aims to take the number to 100 per cent and participation of every individual is necessary to achieve that. The MCC hopes that Swachhata Ambari will bring in required behavioural change in people, a much-needed trait to transform the open defecation free (ODF) city of Mysuru to ODF plus.