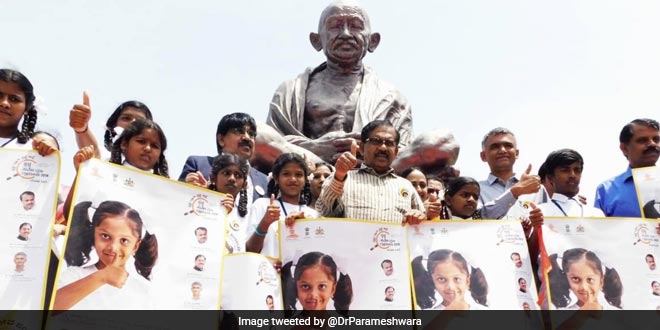 Mumbai: Since the inception of Swachh Bharat Abhiyan, the government of Karnataka has constructed a total of 22 lakh toilets in 29,736 villages. The state needs another five lakh toilets in its rural areas before October 2 in order to achieve the status of Open Defecation Free (ODF) said Dr. G Parameshwara, Deputy Chief Minister, Karnataka at the launch of Swachhameva Jayate, a rural cleanliness and sanitation campaign. The state-wide educative campaign will aim to boost the Swachh Survkekshan Grameen in all the districts with the help of school children.

"Government of Karnataka has constructed a staggering 22 lakh toilets in our villages & another 5 lakh toilets will be constructed before 2nd Oct in order to achieve the status of Open Defecation Free State" – @DrParameshwara (Hon'ble Deputy Chief Minister of Karnataka) pic.twitter.com/zWpp0iRsQR

As we are heading towards making Karnataka an Open Defecation Free state by October, today we are launching the Swachhameva Jayate campaign in order to achieve complete rural cleanliness, said the Deputy Chief Minister while addressing the crowd gathered at Vidhana Soudha in Bengaluru, the capital city of Karnataka.

The campaign is will be a door-to-door activity headed by children of primary and secondary schools. The children will first be imparted education on the cleanliness survey to be undertaken in rural areas across the country. The Swachh Survekshan Grameen will judge villages and districts based on parameters of cleanliness, hygiene, toilet usage and waste management from August 1 to August 31.

Once the children are ready to carry forward the information, they will go from one house to another and tell the residents to keep their houses and surroundings clean to score top points in the national survey. Encouraging the people to construct toilets and end open defecation will also be a special part of the awareness initiative.

“We have chosen children as ambassadors of Swachhameva Jayate as they are the ones who can influence a community to maintain cleanliness,” said Krishna Byre Gowda, state rural development minister.

"We have chosen children as ambassadors of #SwachhamevaJayate as they are the ones who can influence a community to maintain cleanliness" – @krishnabgowda (Minister for @gokRDPR ) pic.twitter.com/Fz31pnlH2A

While adult behaviour towards hygiene will take time and effort to change, children are a lot more amenable to change. Children are spontaneous, honest and full of infectious energy. They have the power to create the India of tomorrow, he further added.

Along with spreading awareness about the survey, the state government will also ask every person residing in the rural areas of the state to undertake a pledge for cleanliness.

When every village, every district of Karnataka is clean, practices hygienic toilet habits, is free from stagnant water and is litter free, Karnataka will win. Swachhameva Jayate! reads the first line of the pledge.

The total sanitation coverage, presently, stands at 92.33 per cent from the previous 35.86 per cent during the launch of Clean India Mission in 2014.