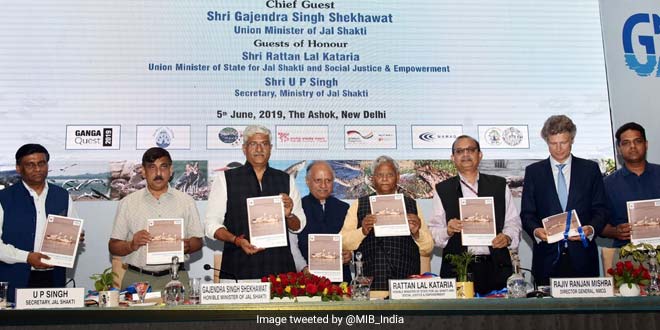 New Delhi: On the occasion of World Environment Day, the National Mission for Clean Ganga (NMCG) on Wednesday organised a day-long convention to discuss ways to protect River Ganga and its tributaries. Jal Shakti Minister, Gajendra Singh Shekhawat, who was present on the occasion, laid emphasis on the conservation of rivers as it provides many resources for the livelihood. In order to increase public participation in Namami Gange program and encourage the youth, the NMCG had organised ‘Ganga Quest’, a pan India bilingual quiz. In the event, the quiz winners were awarded exciting prizes and certificates distributed by Mr. Shekhawat.

Rajiv Ranjan Mishra, the Director General of NMCG, further briefed the media about the event and talked about the importance of Ganga rejuvenation. Mr. Mishra told ANI,

The World Environment Day is a day to commit and dedicate ourselves for improving environment, cleaning and rejuvenating the rivers. Therefore, on behalf of Namami Gange and NMCG, we celebrated this world environment day by holding good talks with the young people, including students, who are engaged on the ground level to improve the environment.

“We had organised the first ever national level online quiz on River Ganga, called the ‘Ganga Quest’. Lots of students did very well on the quiz. More than 36,000 people participated in this quiz and were given prizes by the Honourable Minister Shekhawat,” he added.

New publications highlighting the work of Namami Gange projects were also released on the occasion. The event was marked by the signing of the concession agreement for Howrah, Bally, Baranagar – Kamarhati Sewerage Projects on Hybrid Annuity Mode. The NMCG endeavours every effort by deploying the best available knowledge and resources across the world to clean and rejuvenate the Ganga and its tributaries.