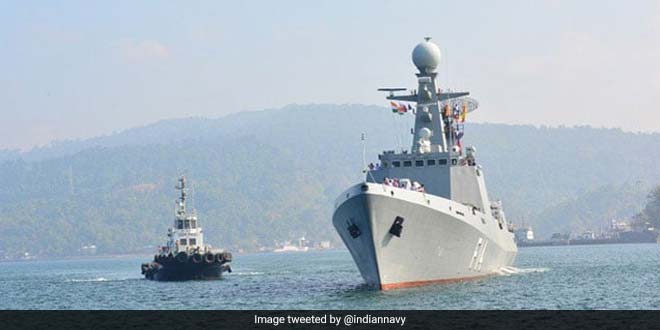 Visakhapatnam: The World Environment Day was celebrated by various units and establishments under Eastern Naval Command at Visakhapatnam, West Bengal, Odisha and Tamil Nadu with the theme ‘Air Pollution’ on Wednesday. Environmental protection has been declared as one of the key result areas in Indian Navy and Eastern Naval Command. In order to curb air pollution, the command has instituted various measures to restrict the burning of waste in and around Naval areas, read a statement.

In addition, regular plantation drives are conducted on various occasions to ensure naval commitment towards a green and clean environment.

“In this regard over 10,000 saplings have been planted in the past year by various units under East Naval Command. The headquarters is keeping a close watch on the Ambient Air Quality standards in and around naval units at Visakhapatnam by using portable Ambient Air Quality Monitoring System (AAQMS) and any spike in the air pollution is brought to the notice of the Pollution Control Board towards early action,” the statement said.

Moreover, the use of electric scooters and carts are being promoted in addition to regular PUC (Pollution Under Control) for the government as well as hired vehicles to curtail vehicular pollution in and around naval areas.

On Wednesday, various units under the Command showed commitment towards environmental protection with emphasis on air pollution. Various activities were planned to spread awareness amongst naval fraternity about air pollution. The plantation drive was conducted in all the units to encourage the naval community towards a clean and green environment.

Besides this, various other activities like workshops, lectures, seminars, photography and painting competitions were conducted to spread awareness about the theme. Naval establishments at Tamilnadu, Adyar, Parundu and Kattaboman undertook mass plantation drives and conducted lectures for naval personnel and families to stress upon the ill effects of air pollution and methods to control it. The statement added,

No vehicle day was also observed to promote the use of public transports and cars pooling towards the reduction in vehicular pollution. INS Netaji Subhas at Kolkata and INS Chilka at Barkul, Odisha which were recently affected by the Extremely Severe Cyclonic Storm ‘Fani’ had taken this opportunity to restore the green cover by undertaking mass plantation drives with the help of service personnel and families. Cleanup drives, awareness lectures, and competitions for children were also conducted on the occasion.