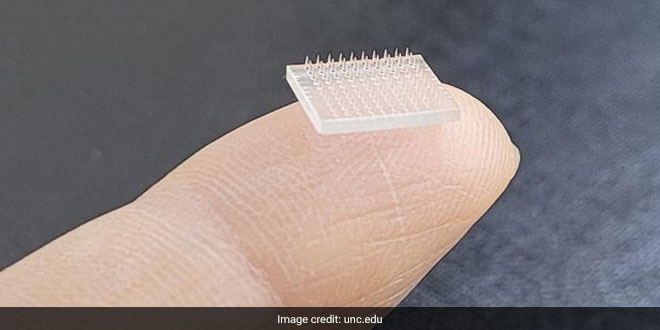 Boston: Scientists have developed a three-dimensional (3D) printed vaccine patch that is not just less painful and less invasive than a traditional vaccine, but also provides greater protection than a typical immunisation shot. A team at Stanford University and University of North Carolina at Chapel Hill (UNC) in the US applied the vaccine patch directly to animal skin in their tests. The resulting immune response from the patch was 10 times greater than a vaccine injected into the arm muscle with a needle, according to the study, published in the journal, Proceedings of the National Academy of Sciences.

The technique uses 3D-printed micro needles lined up on a polymer patch that are barely long enough to reach the skin to deliver vaccine.

In developing this technology, we hope to set the foundation for even more rapid global development of vaccines, at lower doses, in a pain- and anxiety-free manner, said lead study author Joseph M DeSimone, professor at Stanford University.

The ease and effectiveness of the new vaccine may lead to a novel way of delivering vaccines that is painless, less invasive, and can be self-administered.

Study results show the vaccine patch generated a significant T-cell and antigen-specific antibody response that was far greater than an injection delivered under the skin.

This increased immune response could economise vaccines doses, as a microneedle vaccine patch uses a smaller dose to generate a similar immune response to a vaccine delivered with a needle, the researchers said.

Our approach allows us to directly 3D print the microneedles, which gives us lots of design latitude for making the best microneedles from a performance and cost point-of-view, said lead study author Shaomin Tian, researcher at the UNC School of Medicine.

The study overcomes some past challenges – through 3D printing, the microneedles can be easily customised to develop various vaccine patches for the flu, measles, hepatitis or COVID-19.

The COVID-19 pandemic has been a stark reminder of the difference made with timely vaccination. However, getting a vaccine typically requires a visit to a clinic or hospital.

The researchers reiterated that there are currently issues that can hinder mass vaccination – from cold storage of vaccines to needing trained professionals who can give the shots.

The vaccine patches however, able to incorporate vaccine-coated microneedles that dissolve into the skin, could be shipped anywhere in the world without special handling, and people can apply the patch themselves, they said. The ease of using a vaccine patch may also lead to higher vaccination rates, according to the researchers. The team is now formulating RNA vaccines, like the Pfizer and Moderna COVID-19 vaccines, into microneedle patches for future testing.

COVID-19 Has Made Children More Vulnerable To Malnutrition, Here’s How