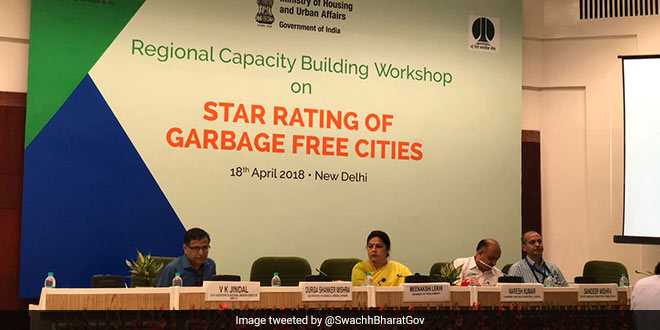 New Delhi: It is sad, but a reality India can do without, garbage dumps everywhere, except for designated spots, no segregation of waste and very little recycling of waste. To fight this problem, in January this year, Ministry of Housing and Urban Affairs (MOHUA) launched a unique initiative – the 7-star rating system through which urban spaces of the country will be evaluated on basis of multiple cleanliness indicators and will be rated accordingly. To institutionalise this rating system, like Swachh Survekshan, on Wednesday the first workshop was held in the national capital to familiarise stakeholders with this newly launched initiative.

Meenakshi Lekhi, Member of Parliament said that a coordinated approach with decentralised solutions should be put in place for tackling the huge generation of municipal waste in the cities. She also emphasised the importance of public participation in making cities garbage free and propounded for enforcing penalties for violators of hygiene and cleanliness principles.

She also pitched for imposing the penalty on people spitting, defecating or littering public places in the national capital. She also advocated for a ban on the use of plates, water bottles and cups made up out of plastic which, besides causing diseases like cancer, chokes drainage system if not properly disposed of.

It (penalty) should be on everything (that dirties public places). These include littering and defecating, using plastic and disposing them here and there.

These actions are imposing a burden on the health of the nation. So, penal action is necessary to change the attitude of people who are not willing to listen.

Durga Shanker Mishra, Secretary, Ministry of Housing & Urban Affairs, said that along with the annual Swachh Survekshan activity, the star rating of garbage free cities will create a healthy competition among the cities across the country to achieve the goals of cleanliness and 100% solid waste management.

In terms of the parameters of the 7-star rating system, the cities will be evaluated on multiple indicators such as –

Currently, the protocol for each of the parameters is being decided by the government and it is expected that Ministry of Housing and Urban Affairs will come out with the proper guidelines soon.

SBM-Urban’s objective of achieving a ‘clean India’ is encapsulated in the vision statement of the star-rating protocol. Our aim is to make all the cities garbage-free and move towards a clean India by October 2, 2019. Another main objective is to achieve 100% waste segregation. Additionally, via this protocol, the government aims for a steady reduction in the waste generation.

The government is planning to hold 16 more workshops across all states by June 2018 in order to institutionalise the protocol towards a garbage free India.