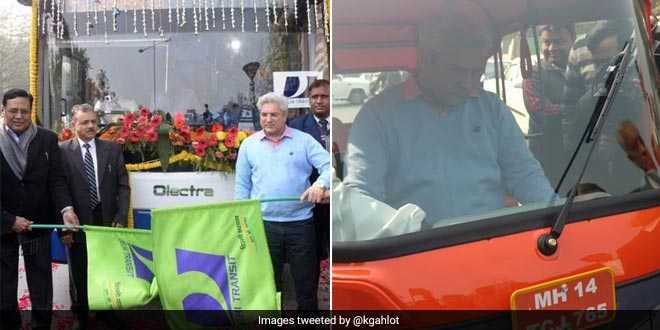 New Delhi: In an effort to clean up Capital’s air, the Delhi government on Thursday flagged off the trial run for an electric bus between Anand Vihar ISBT to Mehrauli and an electric auto by Bajaj. These trials were flagged off by the Transport Minister Kailash Gahlot. The electric bus is Olectra-BYD’s 12 Meter, zero emission and noise-free bus, eBuzz K9 with a 35+1 (driver) seating capacity, as per a statement released by Olectra.

Flagged off 3rd Electric Bus. This time it is Olectra BYD company. It will run on Route no 534 Anand Vihar ISBT to Mehrauli. Company claims that after overnight charging the bus can run for 250 km. pic.twitter.com/YRuheNHE4I

Mr. Gahlot said, “Since 1-2 months we are doing trials of electric vehicles and this is the third bus. A final proposal for 1000 buses will be soon presented to the cabinet and once it is approved the tender will be floated by January.”

The eBuzz K9 is a ‘Made in India’ bus and is driven by formidable Lithium-ion Iron Phosphate battery providing an ability to run up to 300 km on a single recharge, will run on route number 534 between Anand Vihar ISBT to Mehrauli Terminal.

The eBuzz K9 electric bus will be plying on Delhi roads for the next three months, giving the authorities an opportunity to evaluate the efficiency and competency of the buses.

#Delhi gets ready to combat #pollution!

During the flag off N. Naga Satyam, Executive Director, Olectra Greentech Limited said: “As a part of our commitment to contribute to the efforts of ensuring a healthy environment to the public, these Delhi trials are yet another step towards the conversion of fossil-fueled vehicles into a zero-emission transport option. Olectra BYD buses are proven successful in all the terrains across the country. Olectra-BYD is the only player in India which has its electric buses commercially running in four states and we aim to continue our leadership in the eBus segment.”

"The Delhi trials of Olectra-BYD's K-9 buses is yet another step towards conversion of fossil fueled vehicles to a Zero Emission transport option", Shri @nagasatyam, Ex. Dir., Olectra Greentech Limited

The company says that eBuzz K9 electric buses have completed over 500,000 km on Indian roads and have helped reduce CO2 emissions up to 524 tonnes, which would otherwise require 2619 trees to do the same.

Delhi’s Chief Minister Arvind Kejriwal said, “We are very concerned about the health of our people. We are doing everything possible within our control to reduce pollution in Delhi. I have seen many conscious Delhiites doing their bit too. All of us together can make it happen.”

We r v concerned abt the health of our people. We r doing everything possible within our control to reduce pollution in Delhi. I hv seen many conscious Delhiites doing their bit too. All of us together can make it happen. https://t.co/Gx8THYqCRg

According to a study by the Indian Institute of Technology, Kanpur, in the Capital in 2016, vehicular emissions contribute significantly to the presence of particulate matter PM 2.5 and PM 10 – tiny particles that can penetrate deep into the lungs and bloodstream and cause respiratory and other diseases – in the air in summer and winter.

The Delhi government aims to reduce vehicular emissions by inducting electric buses in the public transportation system, as it promotes the use of electric vehicles. It released a draft Delhi Electric Vehicle Policy, 2018 on November 27. The draft policy aims for 25 per cent of all newly registered vehicles in Delhi to be electric by 2023, supported by charging infrastructure and subsidies for the purchase of electric two-wheelers among other aspects. The draft policy has also set a target of 50 per cent of all public transport bus fleet to be zero emission by 2023.

Delhi's @AamAadmiParty govt has just released the Draft Electric Vehicle Policy 2018, which aims for 25% adoption of electric vehicles among new registrations by 2023. https://t.co/xBBLje0uaF

This is by far the most progressive electric mobility proposal India has ever seen.

The Delhi government earlier said it has given the approval to run 1,000 electric buses, estimated to cost Rs 2,500 crore, in the national capital as promised in its 2018-19 “green” budget. The electric vehicles are expected to ply on the Delhi roads by June 2019 and by then charging facilities is expected to be widely available to recharge the e-vehicles.

Jasmine Shah, the vice-chairperson of the Dialogue and Development Commission of Delhi, said the policy was drafted after months of research. Research for the draft Delhi Electric Vehicle Policy included studying the transition to electric vehicles in China, Taiwan and Norway.

After months of effort, the draft Delhi EV Policy is finally out. Lays a big, bold vision for EVs in Delhi and backs it with a sound financial plan and implementation structure. Pls share generously and send in your comments even more generously! https://t.co/qGWnN6lCWh

Delhi had made a shift to cleaner fuel in the early 2000s too when it started CNG (Compressed Natural Gas) Programme which bought CNG public buses and autos in the capital. Many private cars were converted into CNG driven vehicles and according to a study by the Washington DC-based Resources For the Future, conversion of public transport had made the “most significant” impact on air quality.

However, as per experts, lack of restrictions on the purchase of petrol- or diesel-run vehicles could prove an obstacle in implementing the electric vehicle’s policy.