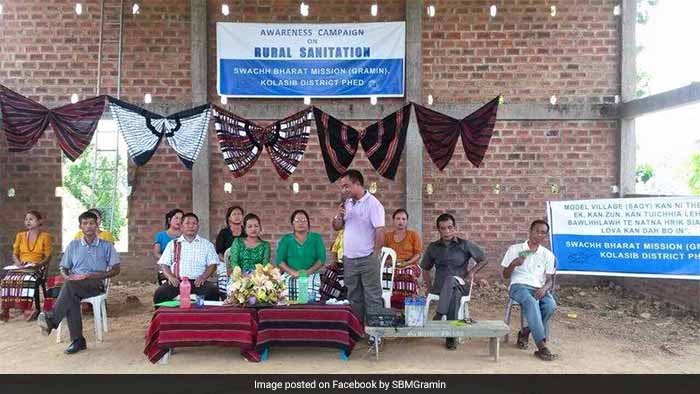 New Delhi: Preparations for the big news were already under their way from January 2018, when six out of eight districts in Mizoram were declared open defecation free. State officials who have worked relentlessly since the launch of Swachh Bharat Abhiyan predicted that the state would go open defecation free within two months. On March 31, 2018, their prediction came true when rural Mizoram was declared open defecation free, with all eight of the state’s districts having 100 per cent sanitation coverage in their respective areas. A state with rough terrain and uneven development, Mizoram’s success in Swachh Abhiyan cause to cheer.

Rural Mizoram had sanitation coverage of 74 per cent when the Swachh Bharat Abhiyan began in 2014. Though in an improved condition compared to many other states, many districts in Mizoram, especially the ones in hilly terrains, remained devoid of proper sanitation facilities. Apart from the three districts of Aizawl, Champhai and Serchhip, sanitation coverage was low in the other five districts, in 2014. District administrations took it upon themselves to improve the situation. Even in the initial years of the campaign, regular awareness camps were held in villages, workshops held on building of toilets and many district administration officials themselves addressed residents on the benefits of having toilets.

The open defecation free status of Mizoram was possible because of the hard work of its district officials, who in many cases, went from village to village to tell people about the importance of cleanliness. In villages where terrains proved to be difficult for the construction of conventional toilets, district officials helped locals use bamboo to construct strong and durable toilets, said K Zohmingliana, State Coordinator, Swachh Bharat Mission (Gramin), Mizoram.

A total of 33,000 toilets were constructed across the state between 2014 and 2018. As per the National Annual Rural Sanitation Survey conducted between November 2017 and March 2018, Mizoram was among one of the best performing states in India. Not only all the districts of the state had 100 per cent toilet coverage, but all the households in rural areas used them regularly, compared to the national average of 68 per cent people with access to toilets actually using it in their households.

“We are proud of the sanitation culture that has developed in Mizoram, people have not only been successful in building toilets, but also using them effectively. This indicates the behavioural change that has accompanied Swachh Bharat Abhiyan in Mizoram and will be effective in ensuring long term cleanliness for the state,” said Mr Zohmingliana.

With the ODF declaration, rural Mizoram becomes the fourth north-eastern state to achieve the distinction. Ministry of Drinking Water and Sanitation Secretary Parameswaran Iyer took to Twitter to congratulate the state of Mizoram for their achievement.

Congratulations to Team @swachhbharat Mizoram at state, district and village level for this big achievement! Another step towards an #ODF India. @umasribharti @PMOIndia #ChaloChamparan https://t.co/diLZJinQpN

Apart from Sikkim, no north-eastern state had sanitation coverage of above 50 per cent in 2014. But the north eastern states’ performance to improve rural sanitation has been exemplary and Mizoram’s ODF status will be inspirational for the other states of the region – Manipur, Nagaland, Tripura and Assam to pursue their ODF goal.