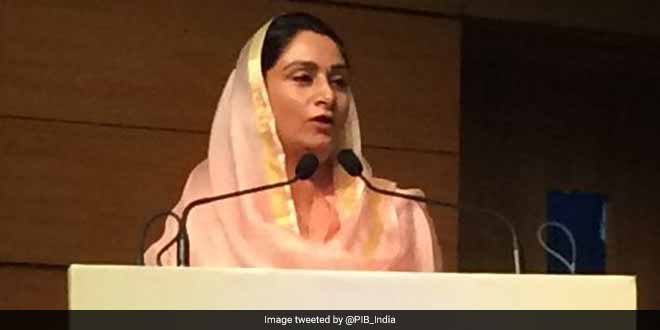 New Delhi: “We all need to take a conscious step of #NoWasteOnMyPlate from today, so that the food goes to someone who has nothing on his plate instead of going into the trash bin,” says Union Cabinet Minister of Food, Harsimrat Kaur Badal as she urged citizens to put an end to food waste in the country at the Curtain Raiser Press Conference held in New Delhi to mark the World Food Day.

According to the UN’s Food and Agricultural Organisation (FAO), globally people waste approximately 1.3 billion tonnes of food annually. FAO also estimates that even if just one-fourth of the food currently lost or wasted globally could be saved, it would be enough to feed 870 million hungry people in the world. Coming to India, according to a report cited in CSR journal, Indians waste as much food as the whole of United Kingdom consumes. This is the state when India is home to millions of people who still sleep hungry on streets.

In a bid to overcome this grim situation, the Union minister asked the citizens to put an end to food wastage and take the #NoWasteOnMyPlate pledge.

This #WorldFoodDay I pledge that there will be #NoWasteOnMyPlate. Please tweet this to pledge to ensure that no one sleeps hungry.

In a bid to transform India’s food economy and put an end to food wastage, currently the government is aiming to partner with various US industries to borrow the best practices, technology and innovations from them, in exchange for providing US companies with untapped investment opportunities that exist in India’s enormous consumer base.

Highlighting how much investment possibilities are there in India, the union minister added, if we combine all the countries leaders’ respective country population it will be still less than India. India has huge consumer base, if you want to grow you can’t ignore India.

However, just the investments from different countries will not curb growing food waste woes in India, stressing on the importance of why saving food at an individual level is important the minister signed off by asking people to start taking action against food wastage starting today.