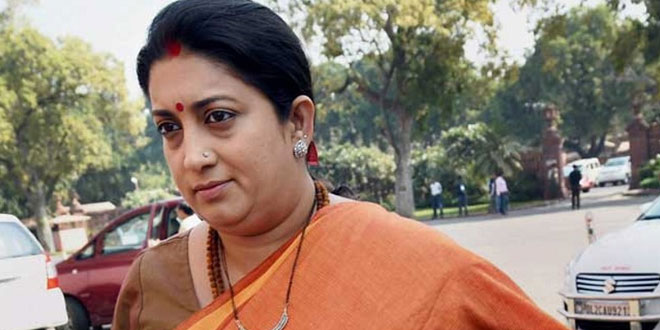 New Delhi: The government will double its outreach during ‘Poshan Maah’ (Nutrition Month) next month by taking the the message of importance of optimum nutrition to every household, Women and Child Development Minister Smriti Irani said on Friday. ‘Poshan Maah’ or nutrition month, launched by the government last year, is celebrated across the country in September. Speaking at a ceremony to facilitate anganwadi workers for their contribution, Ms. Irani said there are five aspects of nutrition – first 1,000 days in the life of a child, fight against anaemia and diarrhea, personal hygiene and knowledge of what is nutritious. She said,

The government will double its outreach during Poshan month by taking the message of the importance of these five aspects of nutrition to every household.

Ms. Irani facilitated more than 300 awardees that included, states, districts, blocks, anganwadi workers and helpers and distributed Rs. 22 crore among them. Madhya Pradesh, Chhattisgarh, and Andhra Pradesh were among the states to be facilitated at the ceremony.

Malnutrition is prevalent not only in rural and poor areas but also in urban areas of India and there is a need to spread awareness on what is healthy and nutritious food.

Prime Minister Narendra Modi’s message was also read at the occasion where he said the government firmly remains committed to provide affordable and quality healthcare to poor, needy and smallest sections of the society. The message read,

Health and nutrition are the priority areas of our government. Health remains one of the key areas in our quest of building an inclusive and new India. An integral part of our vision is achieving ‘kuposhan mukt bharat’ (malnutrition-free India) by 2022.

It further added that digital technology, convergence, and targeted approach are to be optimally utilised to reduce malnutrition. The message said,

This one-of-a-kind initiative is an endeavour to fight malnutrition through multiple interventions. We remain firmly committed to provide affordable and quality healthcare to poor, needy and smallest sections of the society.

The emphasis on health and nutrition will surely make a lasting contribution in furthering healthcare to every nook and corner of the country. However, such schemes can succeed only through a lasting community participation, the message read. The initiative to present incentive awards for Poshan is an acknowledgement and appreciation of the efforts of workforce at grassroots level such as anganwadi workers and helpers, auxillary workers and nurses, among others, it added.

30 km From Delhi, 5 Men Die While Cleaning A Sewer