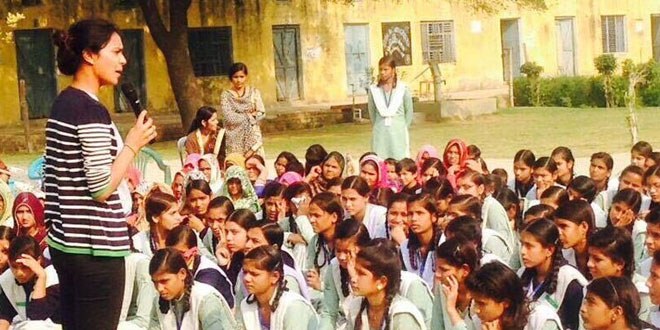 New Delhi: ‘I don’t like the concept of ‘periods’, it tends to stay for 6-7 days and since I can’t afford a sanitary pad, I have to sit at home all day long and miss school,” says a 14-year-old Nivedita Mohpatra from Cuttack district of Odisha. Nivedita is not alone, menstruation keeps thousands of young girls out of school in India. In Odisha alone, as per the latest National Family Health Survey (NFHS) data, 53 per cent women use unhygienic methods and around 69 per cent women use cloth.

To bring about a change, Odisha Government launched the ‘Khushi’ scheme last year ahead of International Women’s Day, with an aim to provide free sanitary pads to government and non-government-aided schools across the state and benefit approximately 17 lakh girls. Now, a fund of Rs 466 crore has been approved for Khushi scheme by Chief Minister Naveen Patnaik.

In an official statement, Chief Secretary A P Padhi said,

The state cabinet approved the scheme Khushi with an outlay of Rs 466.08 crore that will be spent over a period of five years in Odisha.

All About Odisha Government’s Khushi Scheme

Under the Khushi scheme, free sanitary napkins will be provided to 17.25 lakh adolescent students of Class 6 to 12 of the state. Even Kendriya Vidyalayas and Jawaharlal Navodaya Vidyalayas will be covered under the scheme.

The scheme is being implemented by the health and family welfare department of the state, wherein every month, each girl will be provided 18 sanitary napkins for free.

Along with the schoolgirls, the Odisha government will also be providing sanitary napkins to rural women at subsidised rates through ASHA workers (Accredited Social Health Activist) at Rs. 1 for a pad that actually costs Rs 6 to Rs 8.

Related Topics:
Menstrual Hygiene Menstruation In India Odisha
Up Next