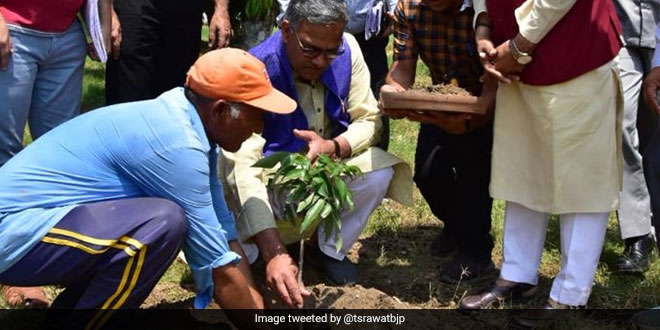 Dehradun: Several tree plantation and cleanliness drives were held in Uttarakhand to mark the 46th World Environment Day on Wednesday (June 5) with Chief Minister Trivendra Singh Rawat exhorting people to plant more trees and shun polythene (plastic bags). Mr Rawat planted different varieties of “lichi” at his official residence and asked people to preserve the tradition of planting trees on marriages and in memory of their ancestors. The chief minister took part in a cleanliness campaign along the Bindal river near Kargi Chowk and said it was not possible to preserve the environment without people’s wholehearted participation.

He claimed that Prime Minister Narendra Modi’s focus on cleanliness had sensitised people to the need to conserve the environment like never before. The Chief Minister also highlighted the initiatives taken by his government to revive the Rispana and Bindal rivers in Garhwal and the Kosi river in Kumaon of Uttarakhand.

The minister said the programme had been launched from Garhwal as the “Char Dham yatra” was underway and the message of cleanliness could be sent easily to the maximum number of people. After the starting of the Mansarovar yatra, a similar campaign, Swachh Bharat, Swachh Kumaon, would be launched, he said. Volunteers of the Rishikesh-based Paramartha Niketan also carried out a cleanliness drive in Baghkhal area of the Rajaji National Park, where its founder Swami Chidananda Saraswati urged people to shun plastic bags.