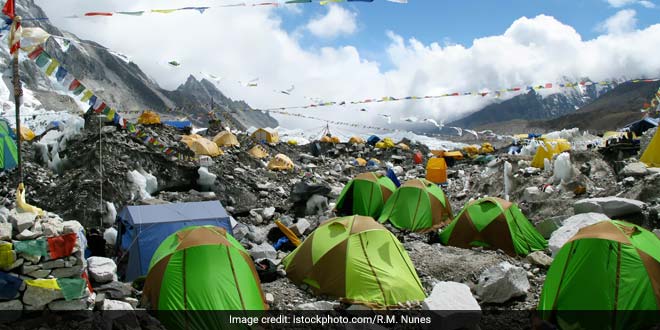 Kathmandu: A total of 11,000 kg garbage and four dead bodies were removed from the Mount Everest during a two-month long cleanliness drive conducted by the Nepal government on the world’s highest mountain. The garbage, which included empty oxygen cylinders, plastic bottles, cans, batteries, food wrappings, faecal matter, and kitchen waste, was flown to Kathmandu in army helicopters from the Everest base camp. “Some of the garbage was handed over to the NGO ‘Blue Waste to Value’, which recycles waste products, during a function in Kathmandu in the presence of Nepal Army chief General Purnachandra Thapa on Wednesday, coinciding with the World Environment Day,” Bigyan Dev Pandey, Director at Public Relations Directorate of Nepal Army, told PTI.

The ceremony officially concluded the cleaning campaign, which began on April 14, to bring back tonnes of trash from the world’s highest peak that has lately turned into a “garbage dump”. Of the total 11,000 kg rubbish, 1,000 kg was brought down from the Everest on the first day of the cleaning campaign.

On Tuesday, we brought down 5,000 kg of the last consignment of garbage from the Everest, Mr Pandey said.

Some of the biodegradable garbage were dumped at Namche Bazaar, a famous market near the gateway to the Everest, he said.

We will continue this cleanliness drive next year also under our Safa Himal Campaign, Mr Pandey added.

He also said that the dead bodies included that of a Russian mountaineer and a Nepali climber. The two other bodies are yet to be identified, he said. Besides the Nepal Army, the other agencies involved in the cleaning expedition included the Nepal Mountaineering Association, the tourism ministry, and the Everest Pollution Control Organisation. Every year, hundreds of climbers, Sherpas and high altitude porters make their way to Everest, leaving behind tonnes of both biodegradable and non-biodegradable waste on the highest peak, which has lately acquired notoriety as the “world’s highest garbage dump”.

There have been attempts in the past to clean up Everest, including a 2014 government-mandated provision making it compulsory for every climber to come down the peak with at least 8 kg of garbage – the amount of trash estimated to be produced by one climber.

From Planting Saplings To A Push For Recycing And Reusing, Here Is How Delhi Celebrated World Environment Day