The NDTV-Dettol Banega Swasth India supports the idea of Leaving No One Behind which is also contained in the 2030 Agenda for Sustainable Development. As part of our special series ‘Able 2.0’, we spoke to Dr Rupam Sarmah Film Director, Record Producer, Composer, Computer Engineer and the Founder of One Little Finger Global Foundation.

Often, children with disabilities become victims of neglect, bullying and harassment. In the movie, Raina, an American neurologist, brings people with disabilities together through music and inspires them to challenge themselves through their abilities and their lives are transformed. To me, One Little Finger is not just a film; it is a movement to break the barriers of stigma around the word disability. All it takes is a change in perspective, a change in our mindset. Disability is what we perceive; ability is everything we believe.

When asked about the muse behind the film, Dr Sarmah said that he was inspired by the life stories of the people with disabilities and wanted to take on the challenge of learning more about them, telling their stories to the world and creating a platform for them to show their abilities and not disabilities.

People are disabled, not only mentally, physically, and emotionally, but by society itself. Disability is not a charity; it’s a human rights issue. We have a moral responsibility to help them and we all rise by lifting others, he said.

The 105-minute-long film is a result of years of research about the subject, a collection of facts, and music therapy. The team was met with multiple challenges like the few investors the film had backed out since they did not like the idea of casting children with disabilities.

I was asked to replace all children with professional actors. I refused because it would have defeated the purpose of the film ‘ability in disability’, he said.

Also Read: Inclusion Of Persons With Disabilities In The Workforce Can Increase GDP By 3-7%: ILO

Since the cast includes children and adults with varied disabilities – from cerebral palsy, hearing and speech impairment, Autism to Down syndrome – another challenge was to train people to act and present themselves in front of the camera. Workshops were conducted to help persons with disabilities through the process of filmmaking.

Sayomdeb Mukherjee, popularly known as Den, is an author, actor, radio jockey and one of the actors in the film. Due to a genetic disorder, Den could not speak till 25 years of age. He has multiple disabilities like dyslexia, quadra plegia – paralysis of four limbs, among others. While working in the movie, Den had to first listen to the dialogues, remember, recall and then deliver. 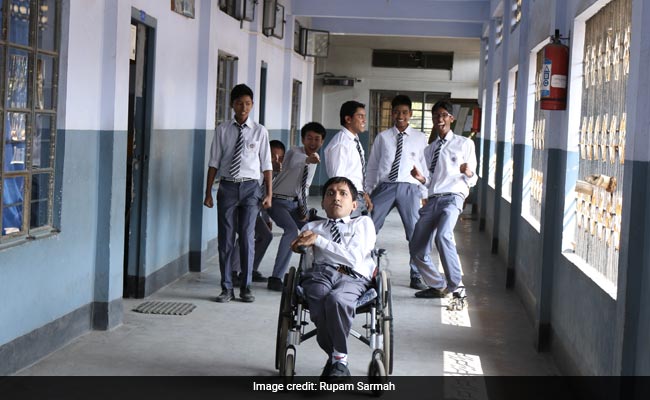 A still from One Little Finger: In frame, Sayomdeb Mukherjee, popularly known as Den

Abhinaya, an Indian film actress and model, is both hearing and speech impaired. Even with her hearing device, she can hear only buzzing sounds. She has no understanding of words and the modulation of words but she can read simple English words. So, we would present words to her like ‘cry’ and she would accordingly enact. It was a learning curve for me and my team to understand each of them.

Further talking about the importance of empowering people with disability, Dr Sarmah said,

Empowering means giving them independence. Take them out of the box so that they can do anything they want to do in this life. Find things they are passionate about and love to do and eventually, help them to get there. And of course, we need to give them a reasonable platform to succeed. It is all about creating a better society. People with disability have fewer opportunities to learn or get a job.

We need to raise awareness and create a competency-based education model so that we can train them with job-oriented skills and connect with employers. Government can take steps to build ramps in public places and with artificial intelligence (AI), we can build assistive devices that can help people with disabilities, he said while signing off.

Able 2.0: Here Is How NGO EnAble India Is Helping People With Disabilities Get Employed