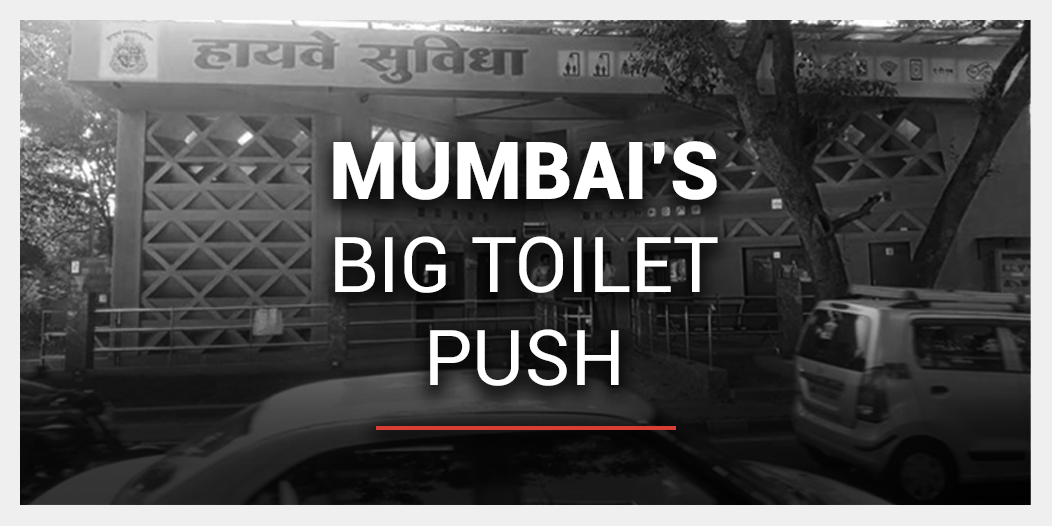 Mumbai: Overtaking big metropolitan cities like Toronto, Frankfurt, and Paris, Mumbai is the 12th richest city in the world according to an Oxford Economics report and is predicted to be the fourth largest city in terms of population globally by 2030. Amidst a rise in the economy and population, the sanitation sector in India’s financial capital continues to paint a dismal picture despite achieving an Open Defecation Free (ODF) status in July 2017. According to sanitation experts, the current ratio of persons per public toilet seat is anywhere between 75 and 150 as against the requirement of 25 seats per citizen under the Swachh Bharat Mission-Urban (SMB-U).

Citing shrinking spaces and a lack of willingness on the part of citizens to use toilets as the main reasons for sanitation problems, Vishwas Shankarwar, Deputy Municipal Commissioner, Solid Waste Management, BMC tells NDTV,

When we were constructing community and public toilets in slum areas and other public places, acquiring a land with enough space was a huge challenge for us. As buildings and offices are going the vertical way in the city, we decided to do the same with the toilets. Though we have provided sufficient toilets in every part of the city, people prefer defecating on railway tracks or beaches than standing in long queues of public toilets. It is not possible to increase the number of toilet seats due unavailability of space. We hope that through vertical toilets this problem is solved.

To bridge the gap in the number of toilet seats available per person and change the perception of people towards public toilets, the BMC is taking alternative steps to conventional toilet construction. From e-toilets, vertical toilets to exclusive latrines that cater to the needs of women, here’s what Mumbai is doing to ensure sanitation for all:

Home to 44,500 people per square kilometer, one of the most crowded cities in the world, Mumbai is paving way for vertical development to accommodate more people. Incorporating the same concept of vertical expansion in Swachh Bharat Abhiyan, the BMC is constructing 22,000 toilet seats across the city. These toilet seats are being installed in what is known as ‘Vertical Toilets’ or two to three storey toilet structures. 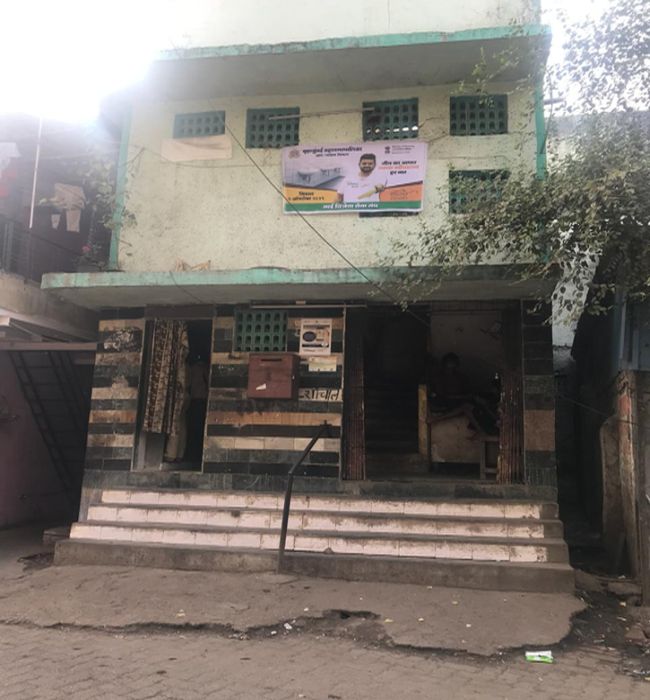 When we were constructing community and public toilets in slum areas and other public places, acquiring a land with enough space was a huge challenge for us. As buildings and offices are going the vertical way in the city, we decided to do the same with the toilets. We aim to build around 22,000 community toilets across slum areas in the next two years, says Mr Shankarwar.

The project is divided into two phases. In the first leg, the BMC is expected to spend Rs 422 crore to construct 15,000 such seats by end of 2019. The remaining will be constructed in Phase II. Since availability of land is an issue, the old public toilets will be dismantled or repaired, and the vertical toilets will be added to them.

Once the toilets are constructed and open to public, its maintenance will be handed over to the Community Based Organisations (CBO), a team of slum dwellers appointed to look after the maintenance and cleanliness of toilets. They will be paid for their services.

The iconic promenade at Marine Drive, also known as Queen’s Necklace, got a swanky and eco-friendly public toilet equipped with solar panel and vacuum technology to save water last year on Gandhi Jayanti. Leading alloy-maker JSW Group, Samatech Foundation, the social development arm of Samatech company, and the Nariman Point Churchgate Citizens Association came together to set up the facility.

I had the honour of inaugurating this world class sustainable toilet at Marine Drive, for all citizens to use. Thank you @Tarinijhanda & SamaTech for your collab with the BMC on this. Look forward to many more such toilets across Mumbai. (1/2) pic.twitter.com/ujT1rKAvKD

It has six toilet blocks, (3 each for male and female) and uses Vacuum Technology that reduces use of fresh water. The flush uses 0.8 litres per flush compared to 7.-8 litres used in a traditional toilet. The same technology also saves 90 per cent of the sewage allowing the sewage tank to store sewage of 8,000 users. The BMC suction trucks collect the sewage on a regular basis and dispose it at a sewage treatment plant which saves million of litres of sewage from entering the Marina Drive bay.

Both, the male and female sections have disable-friendly toilets and the ramps leading up to the toilet allow for wheelchair accessibility. The sustainable toilet is free for users and is maintained by the BMC. 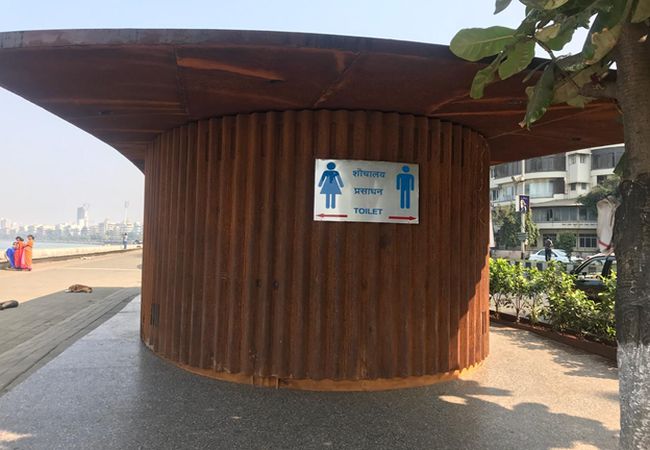 Three months after the toilet was built at whooping cost of Rs 90 lakh, it is turning out to be of great help to the general public, including joggers and cyclists, who throng the scenic Marine Drive in South Mumbai every day.

We receive hundred users on an average, daily and the best the part about these toilets is people themselves use it properly. From shutting the door to flushing the toilet after use, people tend to treat the toilet as their own. Spilling of water on the floors is always a problem in public toilets but not in this one, says a female caretaker.

The idea behind building a swanky and an eco-friendly toilet is to change the perception of people towards public toilets, says Nodal Officer, Subash Dalvi,

The image of a public toilet is not very good in our country. Maintenance of a toilet is always done by two stakeholders – the caretaker and people. People often do not maintain it thinking that it’s not their job, but the very same people feel otherwise when they travel international. By having international standards, the toilet at Marine Drive is a way to change people’s outlook towards sanitation.

To improve the condition of public toilets on Highways, the BMC has come up with a concept of ‘Highway Suvidha’ (facility). BMC’s N-Ward in Ghatkopar has invested Rs 2.25 crore to build three toilet complexes along the Eastern Express Highway (EEH). 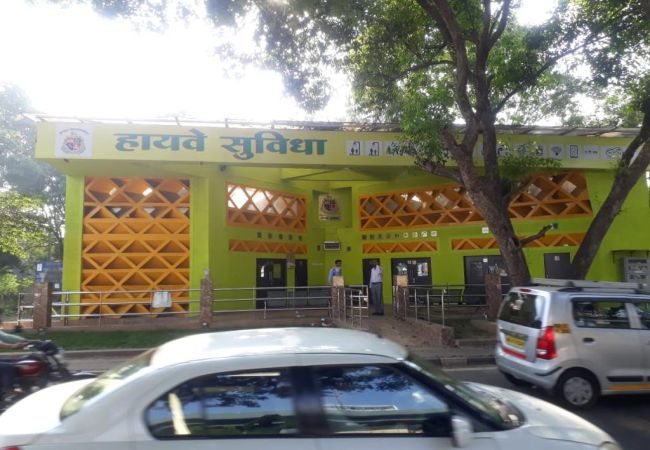 Each of the three toilets will be equipped with an ATM, free WiFi, showers, changing room for mothers with infants, a sanitary napkin dispenser and a public seating arrangement. One toilet complex has already been built on EEH towards Sion, on the service road near Ghatkopar. 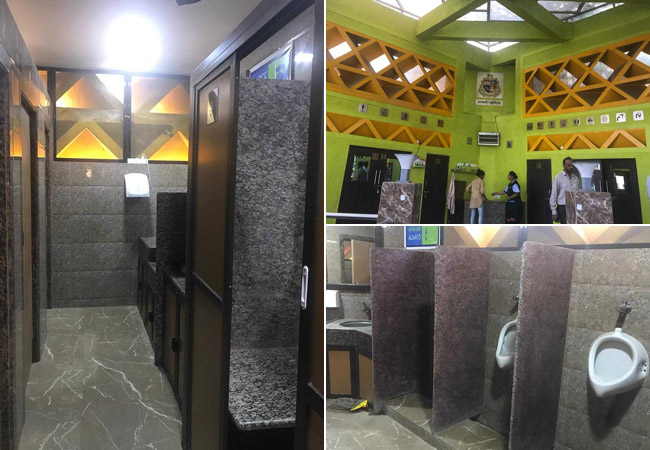 The toilets are equipped with an ATM, free WiFi, showers, changing room for mothers with infants, a sanitary napkin dispenser and a public seating arrangement

Commuters, especially motorists often indulge in open urination on highways even if there is a toilet facility available. This can be attributed to several reasons – lack of cleanliness, a smaller number of toilet seats and people’s attitude. People are bound to use toilets that look beautiful with additional facilities and we have designed the toilets keeping that in mind, says Irfan Kazi, Executive Engineer, BMC N-ward.

Giving more details about the toilet he says that the design is suitable for natural ventilation and lighting system, which will save electricity. The BMC is currently evaluating land availability on EEH and Western Express Highway to expand the Highway Suvidha project across Mumbai.

To make locating a public toilet convenient, the BMC finished mapping 3,465 toilets across Mumbai on Google Maps in March last year. All kinds of toilets including pay-and-use toilets, toilets at railway stations, government offices, parks, petrol pumps, toilets maintained by NGOs and contractors have been mapped.

On typing ‘Public toilet’ the maps will show a list of nearest public toilets and give details like timings, reviews and in some cases pictures as well.  It will also help the user know the time that will be required to reach the spot and shortest route, with live traffic updates. 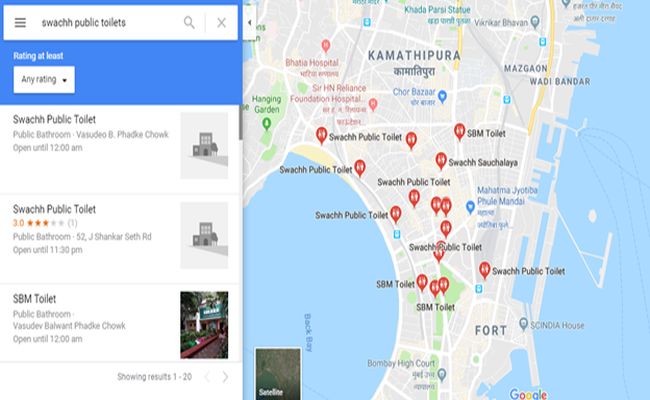 A screengrab of Swachh Public Toilets on Google Maps

While one may find 5-6 toilets in the suggestion list in every area of Mumbai, NDTV found that the mapping doesn’t always disclose the precise location. For example, in R-South Ward (Kandivali East), a public toilet in a slum settlement on the Gaondevi Road was 300-400 metres away from the location indicated by the map.

Apart from ensuring a precise location, making people use the Google App feature is a topic that the BMC needs to address. When NDTV spoke to a cab driver about using public toilets he was of the opinion that due to lack of 24/7 public toilets, he often defecated or urinated in the open.

“I usually drive, prefer to drive in the night and finding a toilet that is not shut is always a problem,” said 45-year-old Shailesh Mandavkar. Unaware about the toilet feature on Google Maps he suggested that government should come up with a list of toilets that functioned round the clock.

When NDTV directed the suggestion of 24X7 toilets to BMC, an official said, that the public toilets are open all hours.

Mumbai has one public toilet for women against three for men and there is 64 per cent disparity between male and female seats in public toilets as of December 2017, underlines a report by NGO Praja Foundation. The report says C ward (Chira Bazar-Kalbadevi-Pydhonie) has the largest disparity at 85 per cent. The ward has 335 toilets for men and only 49 for women.

To tackle the gender disparity in city’s toilets, the BMC, last year, built two toilets exclusively for women, one opposite Mumbai Central station and the other near Gateway of India. A toilet exclusively for women consists of a changing room, a baby feeding station, sanitary vending machine and an incinerator.

When NDTV spoke to one of the caretakers of the women’s only toilet at Gateway of India, she said it has provided a huge relief to female tourists and unburdened the use of traditional public toilet which is only a few steps away. 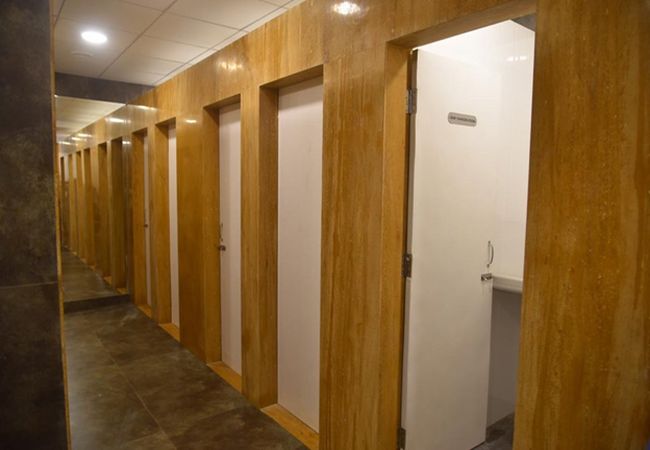 Women-friendly toilet at Gateway of India

A 24-year-old woman from Germany, who was on pan-India tour, was quite shocked to find the toilet so clean,

My friends, back home, had complained about public toilets when they had visited the city a few years ago. So, I was mentally prepared to find a dirty toilet but to my surprise it was very clean and hygienic. I hope more women-friendly toilets come up not only in Mumbai but across the country.

Congratulating all the Mumbaikars, Chief Minister of Maharashtra, Devendra Fadnavis had declared Mumbai Open Defecation Free on July 7, 2017. However, lack of awareness among people, overused and unclean toilets is still perpetuating open defecation in the city. As a solution, the BMC is building innovative and international standard toilets.

Open Defecation Free Mumbai – A Reality Check is an on-ground report on the condition of public and community toilets across Mumbai. Through a series of five articles, it aims to establish if open defecation still persists in the city that was declared Open Defecation Free in July 2017 by Maharashtra Chief Minister Devendra Fadnavis. It also delves into the lifeline of Mumbai, local trains and analyses the cleanliness on railway tracks and platforms