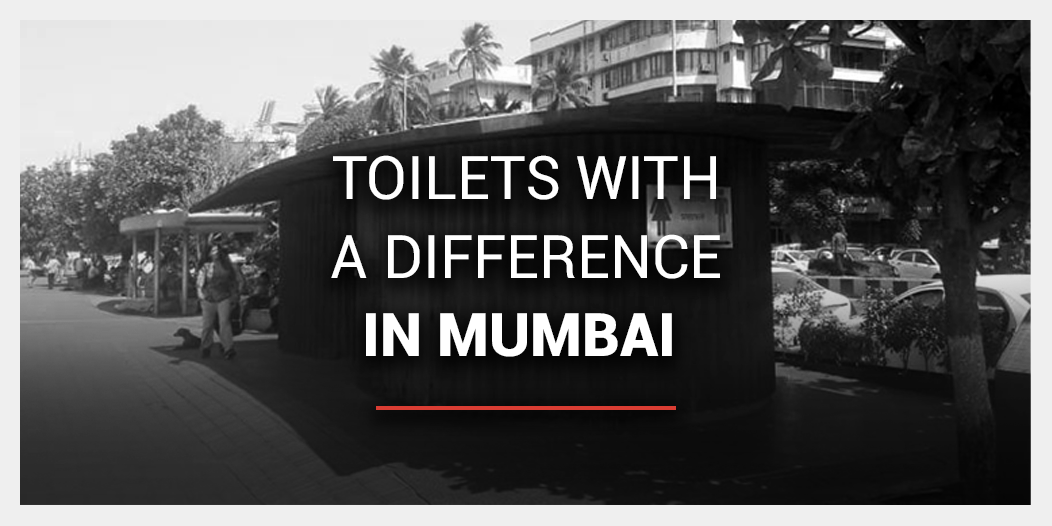 Mumbai: The serenity of the sea, in sharp contrast to the fast-paced life of the bustling metropolis, be it the scenic Marine Drive or landmarks like the Gateway of India, Mumbai is potpourri of cultural, historic, artistic, religious and contemporary attractions. Little wonder then that close to six million tourists (both domestic and international) visit the financial capital of India, every year. In addition to that, thousands of people commute within the city for work daily. This sea of humanity does strain the city’s infrastructure at multiple levels, sanitation and hygiene being one of them.

Mumbai was declared open defecation free (ODF) in July 2017. The city constructed over 100 toilet blocks in four years, so the city has toilets every 500 metres to qualify for the ODF status. But given its population the city found that each toilet seat caters to an average of 75 people, as opposed to 25 people per toilet that Swachh Bharat Mission recommended. So, what does it mean for the city’s sanitation infrastructure? It is proving to be quite a challenge for the authorities to contain instances of open defecation and sustain its ODF tag as the overused toilets are either too dirty or the wait for is too long.

But it is not all gloom and doom. Out of 20 public toilets NDTV team visited during the field trips to assess Mumbai’s ODF status, there were five public toilets that stood out. Located in crowded places and in popular tourist destinations these toilets were clean and packed with facilities like sanitary napkin vending machines, disable-friendly toilets, baby feeding rooms and so on. These toilets are an example of how an ideal public toilet should be.

Being a historic railway station and a UNESCO World Heritage Site, Chhatrapati Shivaji Maharaj Terminus (CSMT) is one of the busiest railway stations in the country. Over 1,250 local and long-distance trains pull in and out of its 18 platforms and together, they ferry around three million passengers daily. 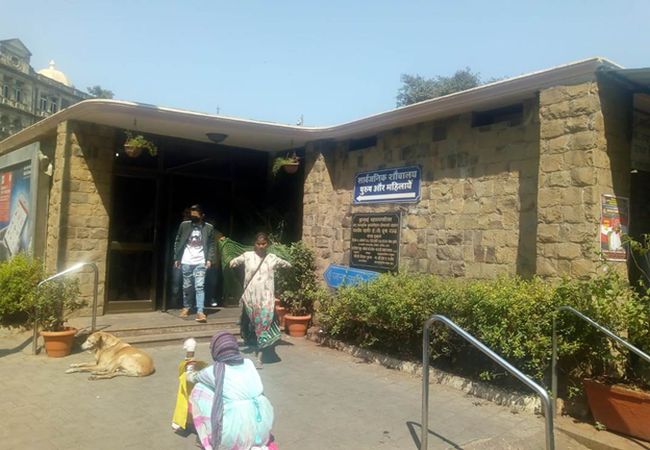 Catering to their needs, the Brihanmumbai Municipal Corporation (BMC) recently built a toilet complex right outside the station. Just few paces away from the station, is the public toilet that records over a thousand users daily. It has eight and five toilet seats for men and women respectively. There is also a disable-friendly toilet in male and female section each and a ramp for wheelchairs. It is cleaned 8 to 10 times in a day and also has a toilet feedback system where citizens rate their experience.

Inside the female toilet, a sanitary napkin vending machine and there is also a baby feeding room. Since it is a pay-and-use toilet, a user fee of Rs 2 is levied from the user. It is open from 5 AM to 11 PM.

Inside the female toilet, a sanitary napkin vending machine and a baby feeding room is available

Narrating its experience of visiting the city for the first time, Bodara family from Khatiawar in Saurashtra said,

My family of three and I reached the CSMT station around 6 am and wanted to use the toilet to freshen up. The one in the railway station had a line. On asking around, someone told us about a nearby toilet. Apprehensive at first, we decided to try it. We were happy to find it so clean and well-maintained. It was more useful for me as I was in need of a sanitary napkin which I managed to find inside the toilet, said Nitya Bodara, who pressed the ‘Clean’ option on the feedback system installed inside the toilet.

Also known as the Queen’s Necklace, Marine Drive in Mumbai has always been a draw for the crowds. During the day, the curved beachfront promenade gives a sparkling view of the beach and the shore. By evening, it becomes a hangout place with street food stalls, families relaxing together and people taking casual strolls. Despite the heavy footfall, there is only one public toilet in a 2.8 km radius of the Marine Drive promenade. Built at a cost of Rs 90 lakh in October last year, the eco-friendly toilet block is equipped with solar panels and vacuum flushes to save water. 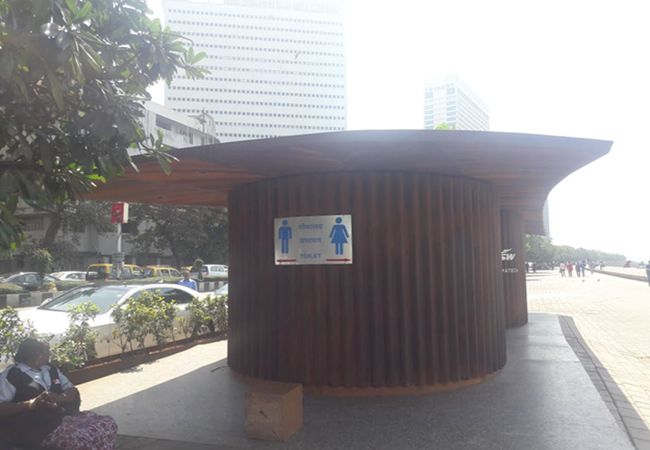 The toilet has six blocks, (3 each for men and women) and uses 0.8 litres per flush compared to 7.-8 litres used in a traditional toilet. Both, the male and female sections have disable-friendly toilets and ramps leading up to the toilet for wheelchair access. The sustainable toilet is free for users and is maintained by the BMC. The toilet remains open for 24/7. 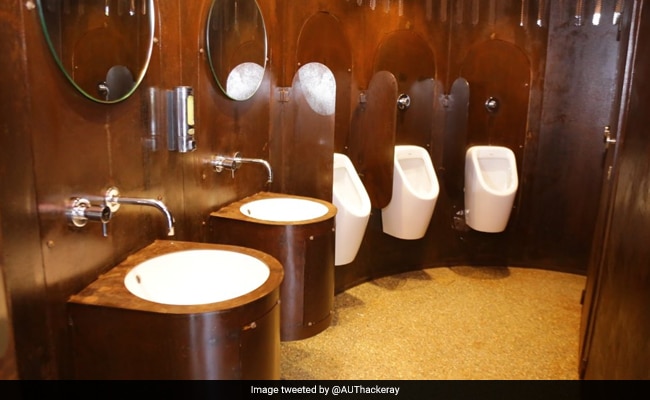 It is cleaned multiple times in a day and hundreds of visitors use the swanky eco-friendly toilet. Talking to NDTV about the open urination and defecation instances, Arun Vaidya, a BMC official from A-Ward said,

Marine Drive is a place where people from different arenas make a visit. Since there are rocks at the shore, it is a convenient spot for people to relieve themselves in the open thus contaminating the Arabian sea. Though we have been keeping a vigil on people and fining them, the eco-friendly toilet has been a huge relief as it is free to use and is of international standard.

Travelling for women, especially during periods, has always been a cause of concern due to dearth of clean public toilets. To cater to the female population, the BMC, last year, built a women-friendly toilet at Gateway of India. The toilet, which is exclusively for women, consists of a changing room, a baby feeding station, sanitary vending machine and an incinerator. It has a total of nine toilet seats including one for the disabled and one bathroom. It is cleaned around ten times every day. 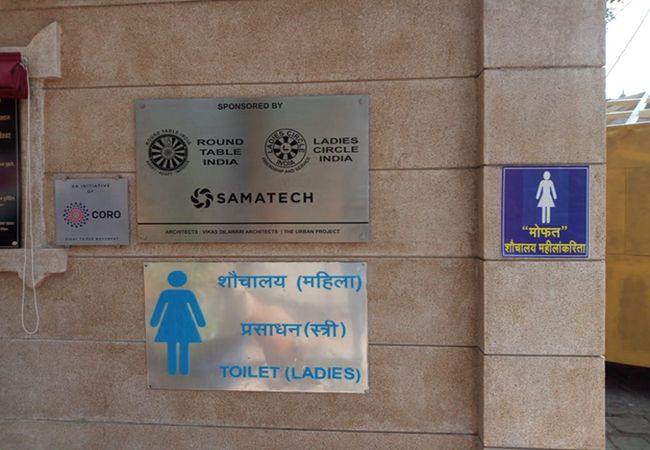 Though there was already a public toilet at Gateway of India, the queue outside female section would always be long due to a smaller number of toilet seats compared to men. As a solution, a women-friendly toilet was built, said Mr Vaidya.

A 24-year-old woman from Germany, who was on pan-India tour, was quite surprised to find the toilet so clean,

My friends, back home, had complained about public toilets when they had visited the city a few years ago. So, I was mentally prepared to find a dirty toilet but to my surprise it was very clean and hygienic. I hope more women-friendly toilets come up not only in Mumbai but across the country.

For 10-year-old Vandit Dhagare, cricket is not only a sport that he plays but also his passion that he would like to pursue as a profession in the future. Since the last three years, he has been visiting the famous Shivaji Park in Dadar for cricket coaching every weekend. However, it is only a few months ago when he started to visit the park on weekdays early in the morning before his school. Vandit attributes this change to the new public toilet at Shivaji Park. The new toilet is equipped with a bathroom, a changing room besides the urinals and toilets. 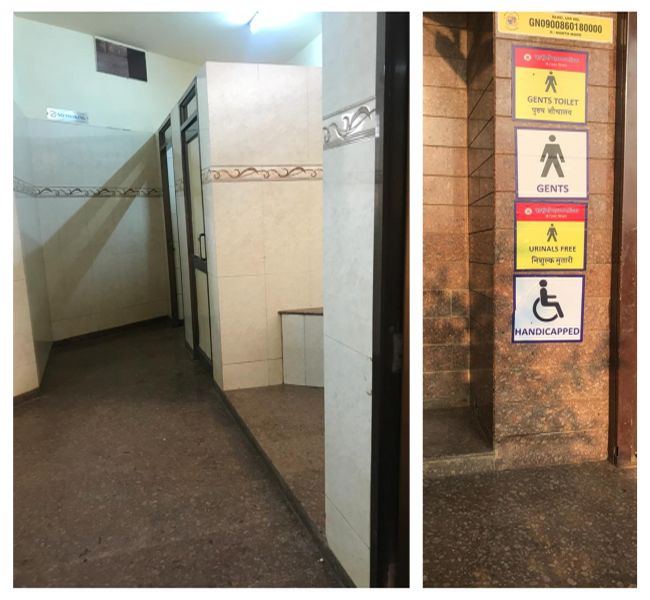 From tourists, sport players, morning walkers, college students to working professionals, hundreds of people use the toilet at Shivaji Park

It was difficult for him to come home from practice in the morning, get fresh and reach school. Now, he doesn’t lose time in travelling back and forth thanks to this new toilet. He finishes his practice, gets fresh in the toilet and leaves for school directly, said Vandana, Vandit’s mother.

While the female section is free-to-use, men have to pay Rs 2 and Rs 3 for using a bathroom and toilet respectively. The toilet is open for 24/7 and has all the provisions for the disabled including a ramp, disable-friendly chair, enough space to fit in a wheelchair, support rails and easy to close and lockable doors. To avoid stench, the toilet has a proper ventilation system.

The estimated users for the toilet in Shivaji Park are around 300 daily. The users range from tourists, sport players, morning walkers, college students to working professionals. The toilet is cleaned four times for an hour during the day.

“Good morning and I guess here is the first scene of Toilet Ek Prem Katha part 2 #WhenYourWalkGoesDownTheToilet,” author Twinkle Khanna had tweeted after spotting a man defecating on the Juhu beach during her walk in August last year.

Her tweet came in a month after Mumbai was declared Open Defecation Free (ODF). Eight months later, her husband and actor Akshay Kumar, who starred in the film Toilet- Ek Prem Katha, installed a bio-toilet along with Yuva Sena President Aaditya Thackeray on the beach to curb open defecation. 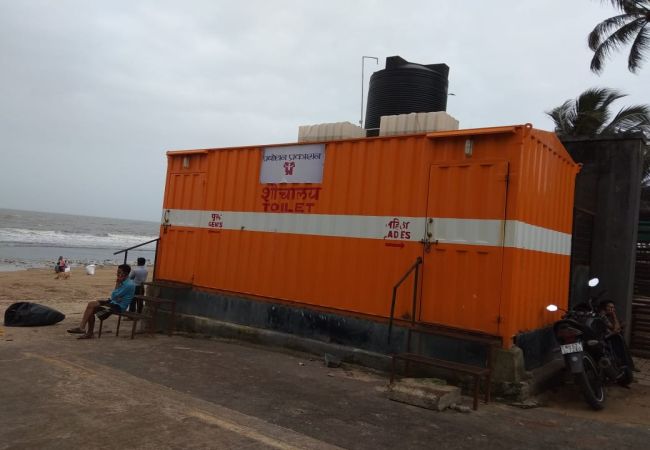 Bio-toilet at Juhu beach has six seats, three each for men and women

This public toilet has six seats, three each for men and women, and a separate row of urinals. It treats human excreta by a biological process called composting. This process leads to the decomposition of organic matter and turns human excreta into compost. The process is carried out by microorganisms under controlled aerobic conditions.

The bio-toilet, that is smell-free has already brought a lot of relief to not only the slum dwellers who were once defecating on the beach but also to the tourists and morning walkers.

Earlier I used to spot at least one person defecating in the open during my morning walks despite having two public toilets. However, two weren’t enough on the 6km stretch of Juhu beach. Besides, slum dwellers do not have to spend money to relieve themselves at this bio-toilet unlike the other pay-and-use-toilets, says Aman Mathur, a regular walker on the beach.

While the aforementioned five toilets are equipped with basic facilities like water, electricity, doors, latches and seats for the disabled, there are several toilets in the city that are broken and lack such basic infrastructure. Challenges like providing a proper door for privacy, overused toilets in different parts of the city, lack of toilet seats for women and the disabled continue to question Mumbai’s ODF status. The BMC, on its part, is in the process of revamping old and broken public toilets. In addition to that, it is also trying to change people’s perception of Indian public toilets in the form of unique toilets like Eco-friendly toilets, Highway Suvidha, women-friendly toilets and so on. (Read More: ODF Mumbai, A Reality Check: Tackling Problems Of Space, Population And Behavior Change, Here’s How The City Is Ensuring Toilet For All)

Open Defecation Free Mumbai – A Reality Check is an on-ground report on the condition of public and community toilets across Mumbai. Through a series of five articles, it aims to establish if open defecation still persists in the city that was declared Open Defecation Free in July 2017 by Maharashtra Chief Minister Devendra Fadnavis. It also delves into the lifeline of Mumbai, local trains and analyses the cleanliness on railway tracks and platforms

ODF Mumbai, A Reality Check: Overused, Unclean And Lesser Number Of Toilets For Women Are Just Some Of Mumbai’s Sanitation Woes