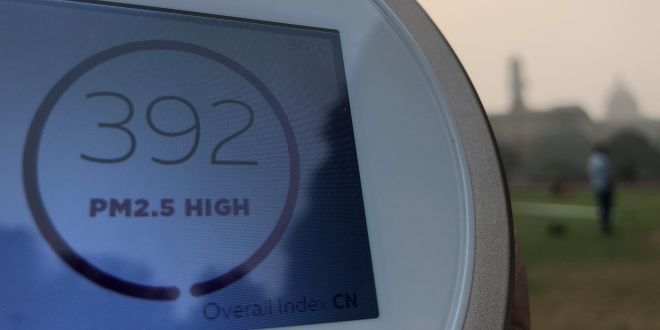 New Delhi: Outdoor air pollution was responsible for six percent and household pollution for five percent of the total disease burden in India in 2016, a new study has said at a time when deteriorating air quality is choking Delhi NCR. Air pollution remained the second leading risk factor after malnutrition in India as a whole, posing a significant and growing challenge to population health, said the report jointly prepared by the Indian Council of Medical Research (ICMR), Public Health Foundation of India (PHFI) and Institute for Health Metrics and Evaluation (IHME) in collaboration with the Ministry of Health and Family Welfare. According to this study titled ‘India State-level Disease Burden’ which was released by Vice President Venkaiah Naidu on November 14, disease burden due to air pollution remained high in India between 1990 and 2016, as it caused non-communicable and infectious diseases such as cardiovascular and respiratory diseases and infections.

This risk factor encompasses both outdoor air pollution from a variety of sources as well as household air pollution that mainly results from burning solid fuels in the home for cooking and heat.

According to the study, exposure to household air pollution from solid fuels has dropped by 52 percent in India since 1990, this was largely driven by efforts to reduce the use of solid fuels in households. Notably, the decrease was lowest in the several Empowered Action Group states (the eight under developed states: Bihar, Chhattisgarh, Jharkhand, Madhya Pradesh, Odisha, Rajasthan, Uttaranchal and Uttar Pradesh) and intermediate in the North-East states group.

On the other hand, the exposure value of outdoor air pollution increased by 17 percent from 1990 to 2016. And, the magnitude of this exposure was higher in the EAG states group as compared with the North-East and other states.

The outdoor air pollution caused 6.4 percent of India’s total Disability-Adjusted Life Year (a measure of overall disease burden, expressed as the number of years lost due to ill-health, disability or early death) in 2016.

Also Read: An Air Purifier That Converts Smog To Diamonds Has Found Fans In Ayushmann Khurrana And Amitabh Bachchan

The report even called for ramping up of efforts through inter-sectoral collaborations based on the specific situation of each state for controlling air pollution.

“Concerted efforts are needed to curb the sources of this pollution, including power production, industry, vehicles, construction and open burning. Controlling air pollution has to be one of the highest priorities for improving the health of India’s population that would impact generations to come,” the report recommended.

The Lancet Commission last month published a report which found that pollution caused over nine million deaths worldwide in 2015 – accounting for 16 percent of the deaths worldwide.

Malnutrition Followed By Air Pollution Main Cause Of Diseases In India In 2016: Study