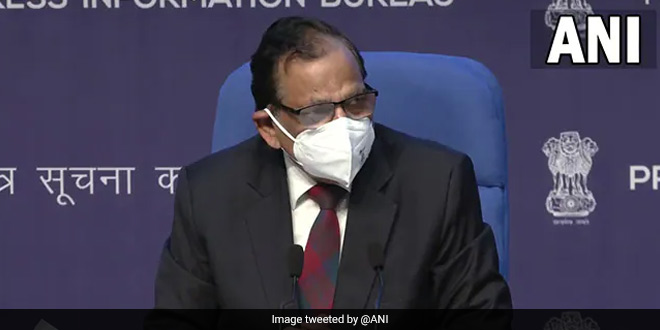 New Delhi: Dr VK Paul, Member-Health, Niti Aayog on Thursday said that the overall COVID-19 situation in the country is optimistic, however, India cannot lower its guard. Addressing a press briefing, Dr Paul said, “Overall COVID-19 situation is very optimistic. However, some states including Kerala, Mizoram, Himachal Pradesh are still reporting a large number of cases. We cannot lower our guard.” Pressing on the need to remain vigilant, he said, “The world doesn’t know everything about this virus. This isn’t the end of the virus, it will try to emerge fitter. Vigilance must go on.”

We have learned a great deal about his pandemic and the virus, but the world doesn’t know everything about this virus. The world should remain united to fight this virus and should continue to use the tools that are at our disposal, he added.

Mr Aggarwal informed that 96 per cent of the Indian population above 18 years has received their first dose of the COVID vaccine, while 78 per cent have received the second dose.

As many as 1.61 crore precaution doses have also been administered, while 69 per cent of the 15-18 age group has been vaccinated with the first dose of COVID vaccine, he added.

The Joint Secretary then furnished data to reveal the slow down in spread of COVID infection, and said, “On January 24, the daily positivity rate was recorded at 20.75 per cent, which has now decreased to 4.44 per cent. It indicates that now the rate of infection spread has come down significantly.”

As per the Ministry of Health and Family Welfare, India had reported 67,084 new cases of COVID-19 and 1,241 fresh deaths in the last 24 hours. With this, the country’s active caseload currently stands at 7,90,789, which accounts for 1.86 per cent of total cases.

Leaving No One Behind: The Need To Build An Inclusive Society, One With Equal Access For People With Disabilities