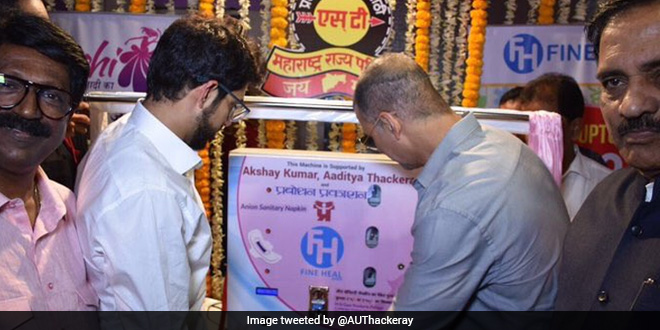 New Delhi: Translating his onscreen persona to reality, actor Akshay Kumar has installed a sanitary pad vending machine in Mumbai’s Central ST Bus Depot. The star’s recent release sees him essay the role of PadMan, a movie based on the social innovator Arunachalam Muruganantham, who invented a machine to manufacture low cost sanitary pads for women in rural India without access and means to hygiene products. Arunachalam’s initiative that also won him a Padma Shri, is a significant effort to spread awareness about menstrual hygiene across India where just 12 per cent of the menstruating women use sanitary pads and are otherwise using cloth, rag, ash, sand and husk which are very unhygienic. To further the cause of spreading the use of sanitary pads, Akshya Kumar kickstarted the pad vending machine initiative in Mumbai and shared the news on social media and said, “Placed a sanitary pad vending machine at Mumbai Central ST Bus Depot today, hoping to place more across the State and eventually hopefully the whole country. Thank you @AUThackeray for your support.”

Placed a sanitary pad vending machine at Mumbai Central ST Bus Depot today, hoping to place more across the State and eventually hopefully the whole country. Thank you @AUThackeray for your support ???????? pic.twitter.com/MghqrEEK9Q

The actor Akshay Kumar along with Yuva Sena leader Aaditya Thackeray will be introducing 60 more sanitary napkins vending machine in the state. Informing the netizens about the activity, Aaditya Thackeray said,

Akshay ji and I are placing 60 sanitary pad vending machines across the State. The rotary club has joined us with 40. We are in the 100 club! Thank you @akshaykumar ji for this initiative

Akshay ji & I are placing 60 sanitary pad vending machines across the State. The rotary club has joined us with 40. We are in the 100 club!
Thank you @akshaykumar ji for this initiative pic.twitter.com/To3sqNVWko

Apart from spreading menstrual hygiene message, Akshay Kumar is also boosting giving a fillip to the Government’s Swachh Survekshan campaign among Mumbaikars. In his recent video, the actor thanked people of Mumbai who have changed their unhygienic or dirty habits and helped Mumbai become a better and cleaner place. He also asked people to make sure that their city performs better in the ongoing Survekshan and said,

It is the duty of every individual to keep their city clean – will you like it if people say that ‘you’ live in India’s most dirty city/area or block. No, right? Then, come forward and do your bit to keep Mumbai swachh.

Earlier this month the first vending machine was installed in Mumbai’s first all-women toilet which was inaugurated by Akshay’s co-star in PadMan, Sonam Kapoor. Such vending machines are also being installed in government secondary high schools by the Brihanmumbai Municipal Corporation (BMC).

I’m also proud to add that as per our election manifesto (being fulfilled) 159 BMC high schools have been fitted with sanitary pad vending machines and so are all the ladies toilets across the city. This current budget also provides for it.

Recently, the Maharashtra government in a bid to spread menstrual hygiene awareness launched a state-wide menstrual hygiene management (MHM) programme, with an aim to cover 40 million household throughout the state. The initiative in the first phase has been started in Maharashtra’s Sangli district. As a part of the programme, representatives from the district collector’s office, department of water and sanitation and UNICEF will visit the schools and Anganwadis twice a month to conduct awareness programmes on menstruation.