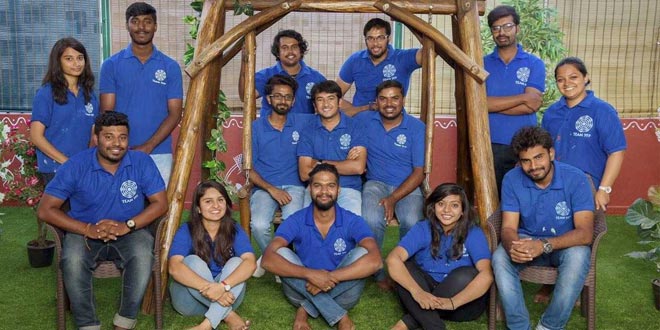 New Delhi: Currently, we are halfway through Prime Minister Narendra Modi’s flagship programme of Swachh Bharat Abhiyan; where municipal bodies across India are striving hard to implement waste segregation and make their respective areas open defecation free (ODF). However, a silent yet a significant issue is not being given enough attention. Black spots turned garbage dumps are found anywhere from a wall, corners of streets to flyovers and is a mounting problem in urban areas. To address this problem in Bengaluru, four friends decided to eliminate city’s black spots through the art of painting.

The mission to beautify these spots started on June 3 2014, even before the Clean India Mission was launched. In 2014, 21-year old Amit Amarnath saw that children of his colony, Banashankari II Stage, were unable to play in the nearby park as it was gradually turning into a small yet a piling trash yard. Despite repeated complaints to the Bruhat Bengaluru Mahanagara Palike (BBMP) no action was taken says Amit. It was then that the idea of beautifying the spot sprung to him. Along with his three friends he formed Youth For Parivartan (YFP), a non-governmental organisation.

YFP started with four people and within a span of three years, it has more than 1,200 active members. With a swachh motto of ‘Stop complaining, start acting’, the organisation has so far managed to clear a significant 94 spots in the city, of which 73 have also been maintained effectively. 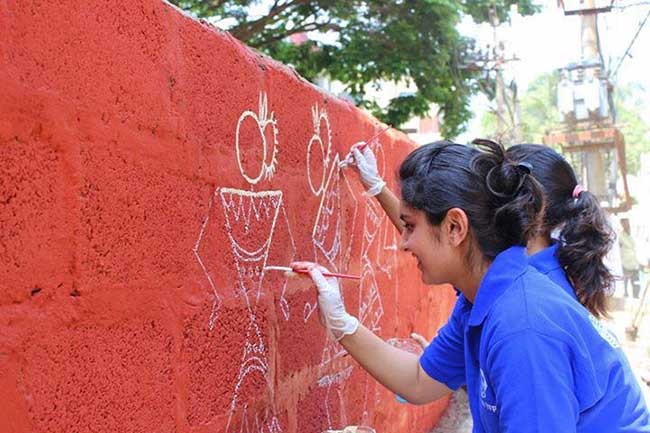 The organisation has so far painted 94 spots

No wants to see ugly spots while they are on their way to work or college. People are certainly raising voices for lack of cleanliness, but the tone is often of a complaining one, where the government is blamed for everything. Also, in this fast paced life people do not have much time to spare for such issues. Hence we pulled financial resources from our own pocket and started the initiative, says Amit.

As people started to notice the successful efforts of young guns, they extended a financial support. The organisation gradually started to get money from corporates under Corporate Social Responsibility (CSR) activities. 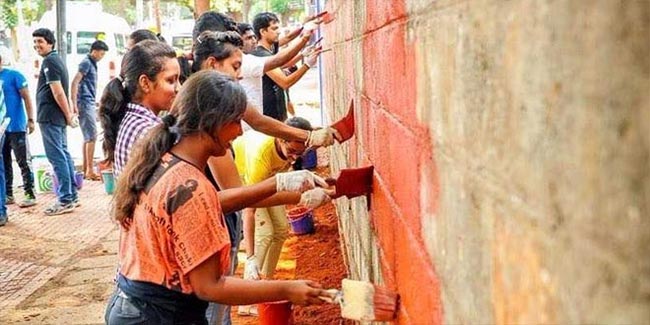 Amit, along with his team members also approached the BBMP and offered a helping hand under the Clean India Mission. Impressed by the paintings and organisation’s determination to make the city clean, the civic body started working together with them. “Whenever we feel that a particular spot needs beautification, we clear the trash from there and ring YFP members to paint the area. And we have received a positive response from the citizens as well,” says Srikanth Ramesh, member of the corporator. 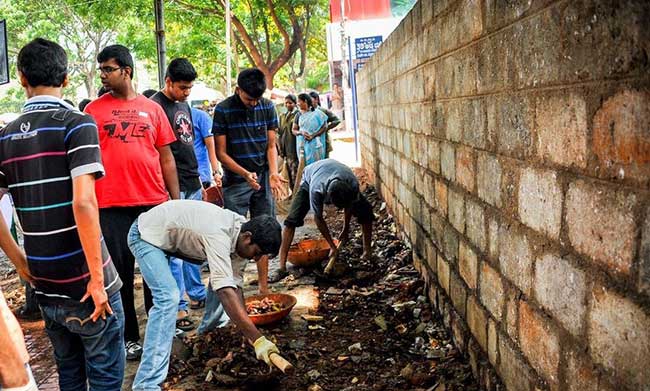 The YFP works hand in hand with the municipal corporation

Infact last year, these Swachh warriors were appreciated by Prabhavati Ramesh, a corporator from Puttenahalli ward. The organisation signed a MoU with the local body and eliminated 7-8 black spots from the ward. “Thanks to Swachh Bharat Abhiyan, local authorities are coming forward and support us,” says Amit.

The motive behind spending hours in painting a wall and making it look attractive is simple, to bring about a behavourial change. YFP believes that if they paint a wall and put messages of cleanliness, people will think twice before spoiling such an art, “The aim of targeting a person’s mindset through our paintings has hit the right chord as we have observed 80 per cent of success rate in these three years,” say Amit. 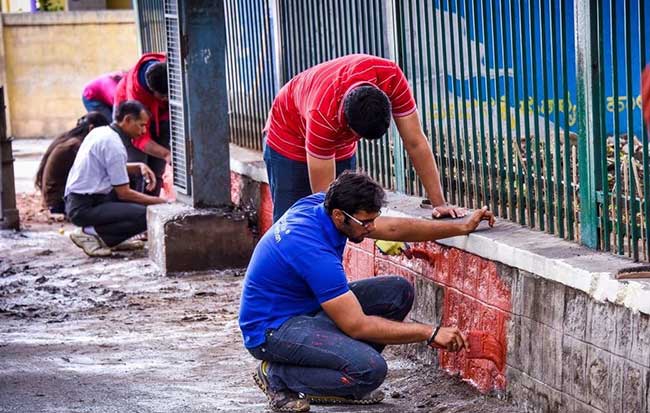 A fine example of this can be seen in one of city’s prime location, the Mysore Bank Circle which is right opposite the Banglore University wall. Before the area was turned picturesque, the problem of open urination and posters was huge. The YFP members, like their other projects washed and painted the entire area. When a few members were on their routine checking rounds and saw that the problem was still there they decided to repaint it. They painted the wall yellow and red, which happens to be the colors of the Kannada flag. Despite putting painting of a flag, the issue still remained. Finally they decided to paint the portraits of BR Ambedkar and actor Rajkumar. “Within 15-20 days the problem was solved and after the area was cleaned, the civic body even installed two bins in the area,” adds Amit. 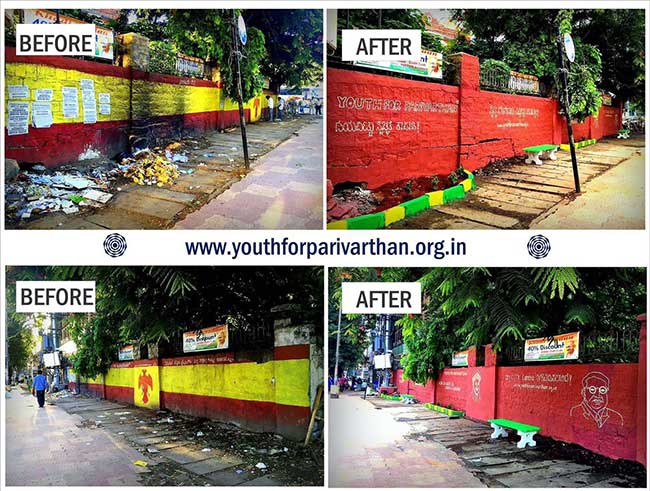 Problem of urination near the Mysore Bank Circle came to end

Likewise, an area in Uttarahalli ward was cleaned by YFP after an old age home approached them and complained about the dreadful smell that came from the nearby dumping spot, “This activity where we helped the elderly people, I would say it was our proudest moment under our swachhta initiative,” says Amit.

Everytime, YFP gets a complaint of a black spot, the team immediately reaches the spot, gives a call to the municipal workers who come and remove all the trash. Once the garbage is removed, a team of 40-50 people is formed and on weekends they gather at the spot sharp at 8 am. Within 6-7 hours, the entire face of the area is changed by their beautiful paintings. 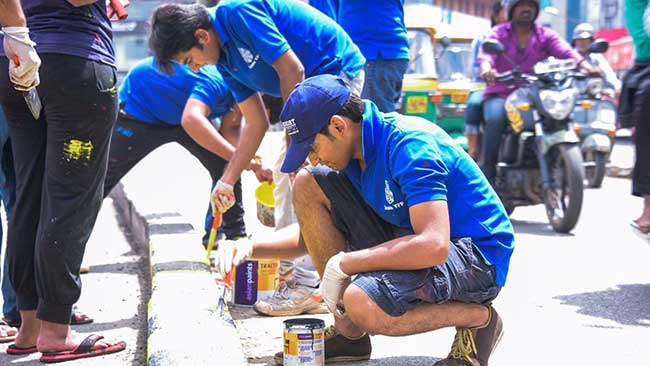 Students, Professionals dedicate their weekends in the cleanliness activity

To make sure areas are well maintained after their hard work, the team identifies local residents who can monitor the place on a regular basis, “We do routine checkups for a few days and then assign the work to locals who keep in touch with us,” says Amit.  With money coming in from multiple channels, the organisation has recently started installing CCTV cameras, adds Amit.

YFP which is slowly but steadily creating a moral responsibility among the Bengalureans soon plans to convert patch of garbage land into an open auditorium in Puttenahalli ward, “Once the area will be cleared by the civic body, we plan to beautify it and conduct tuitions for kids belonging to the slum areas,” says Amit.