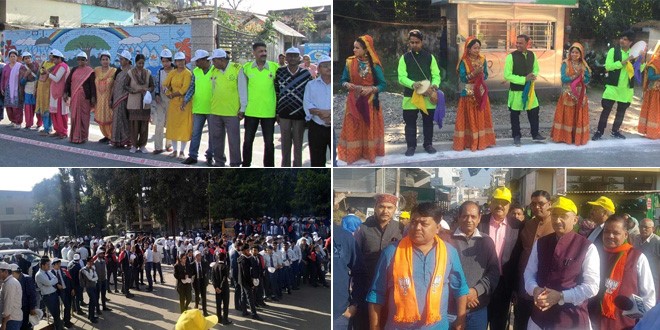 New Delhi: Residents of Dehradun came together to say a firm ‘no’ to plastic. More than one lakh citizens joined hands and formed a 50-kilometre human chain to show their commitment to fight plastic pollution. While a ban on polythene carry bags below 40 microns and single-use plastic cutlery was announced in by the Uttarakhand state government in 2017 and later enforced in 2018, there has not been much difference in the past year due to lack of proper implementation of the ban. Talking about the event organised by Dehradun Municipal Corporation on Tuesday, Dr. Kailash Joshi, Chief Municipal Health Officer told NDTV,

The initiative is to spread awareness against the single-use plastic usage and encourage people to follow the plastic ban enforced last year. We are aiming to minimiSe and gradually eradicate single-use plastic. We started a drive against single-use plastic on a mission mode on August 27 this year in 38 wards. The human chain event is also a part of this drive. 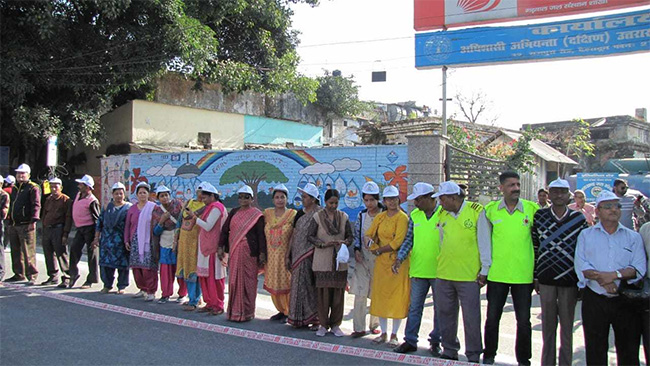 The 50 km human chain began from Miyanwala concluded at the clock tower in the city after crossing through Mussoorie diversion, GMS road and Saharanpur road, informed an official of the Dehradun Municipal Corporation. Along with hundreds of school and college students, the human chain saw participation of thousands of residents, social activists, scientists, environmentalists, municipal officials and political leaders including Chief Minister of Uttarakhand Trivendra Singh Rawat.

The Municipal Corporation organised in a 50KM long human chain to create awareness against polythene and single-use plastic. In this event, school children, businessmen, employees pledged not to use polythene and plastic and make the country plastic-free.

Neeta Mathur, a citizen of Dehradun who participated in the human chain event said,

At first, we had mixed feelings about this event because we thought that it will only create a traffic problem in the city and will not have any ground-level effect on the cause of shunning plastic. But when we came to witness the event, we saw that people were talking about bringing a change in their habit of using plastic and are promising to each other to keep their homes and surrounding single-use plastic free, we were so moved that we joined the human chain too. An awareness programme of such a magnitude will surely bring a positive change in the attitude of people towards polythene and single-use plastic. 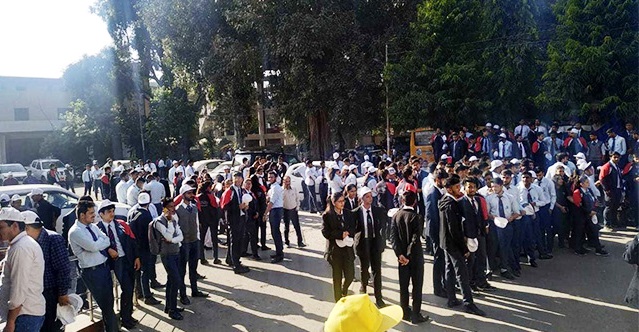 Highlighting the lack of awareness among the people living in the slum areas in the city and lack of will among those who know about the ill-effects of single-use plastic, Arjun, a 14-year-old student said,

People who are living in slums and roadside know little about the menace of plastics. They are also not aware about the alternative. People living in the affluent areas too are used to plastic so much that they don’t want to change their habit due to lack of will. I am here today to talk to them and tell them that they must look for alternatives whenever they require single-use plastic, for the environment and for our future. In my 14 years of life I have always seen the roadside, the drains and the river Rispana in our city choked with plastic waste. I want to see clean surroundings. 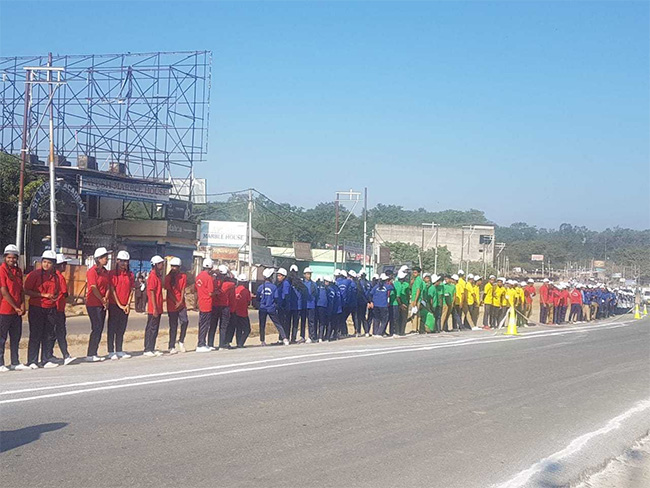 The 50 km human chain began from Miyanwala concluded at the clock tower in the city after crossing through Mussoorie diversion, GMS road and Saharanpur road

Problem Of Plastic Waste In Dehradun

According to the Municipal Corporation, Dehradun generates over 300 metric tonnes of solid waste per day, most of which goes untreated. Out of the total waste generated per day, about 20 per cent is plastic. According to Dr. Joshi, since only a minuscule portion of the waste is being sent to the recycling centres, most of the plastic waste is lying around the city, polluting the environment. He said,

The problem of plastic waste in the city is very high. You can imagine this as I tell you that we have found as much as 10 kilogram of plastic in the stomach of dead cattle in the city.

He further informed that the city has recently started waste segregation and installed a waste treatment plant in the previous month. He said,

Installing a waste treatment plant is a step forward towards waste segregation and keeping waste from lying in the dumping yards or in the open. We are also in discussion with a plastic recycling plant in Himachal Pradesh to help us reduce the plastic waste in the city through recycling.

The city’s dismal state of the waste management system was also highlighted by Swachh Survekshan earlier this year. Dehradun was ranked 384th out of 425 cities having a population of over one lakh. The state capital’s ranking went down by as much as 125 positions since it had been ranked 259th in the survey last year. The Dehradun Municipal Corporation is now working on improving the city’s ranking in the upcoming Swachh Survekshan 2020 by focusing on better waste collection, segregation and treatment.

Related Topics:
Plastics Uttarakhand
Up Next

Universal Coverage Or Immunisation For All Is Still A Long Wait