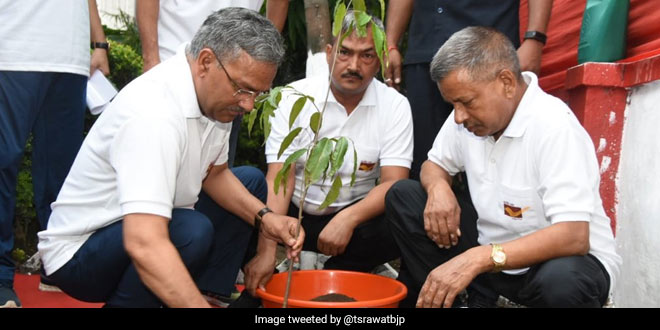 At the moment, our planet is witnessing environmental degradation, climate change and global warming and one of the major reasons behind this is deforestation. To overcome this we organised a plantation drive in the state.

350 officials of the department along with the Chief Minister participated in the walk and together the group planted 3,000 native trees at 2,700 post offices in the state. The massive tree plantation took place at the post offices situated in the urban areas of the state as it is the urban region that is considered to be more polluted and a major contributor to the air pollution majorly, says an official.

As part of the drive, only native trees like neem which have medicinal values, and fruit-bearing trees have been planted.

Along with this, we have made it mandatory for our staff to have five plants at their residence. From Tulsi, Aloe vera to flower-bearing plants, officials can have any kind of plant at their house. The idea and motive is simple – to produce more oxygen and have clean air, says Mr Raj.

Sharing the news on social media, the Chief Minister tweeted, “With the message of saving the environment and earth, I participated in the ‘Walk For: To Save Earth’, organised by Post Office Department of the state. Planted a tree.”

Speaking at the launch of the plantation drive, the Chief Minister said each and every person’s contribution is important for protecting our environment. Every small effort counts. Further talking about the need to protect the environment, Mr Rawat said,

Our culture is connected with our nature. We worship trees, plants, rivers, wells as well as animals. Even in science, the benefits of trees such as Peepal, Tulsi are inscribed. So we need to protect them and save our environment.

Drawing attention to the prevailing water crisis in the country and what the state government is doing to conserve water, Mr Rawat said,

Plantation of trees are important for conserving water. Prime Minister Narendra Modi had also stressed on the need to conserve water. I have directed the state government to build watersheds in each district. Water is invaluable. We all must make efforts to conserve water. Water sources should be charged. Even if one liter of a bottle is kept inside the toilet for use then also we can save lakhs of liters of water every day.

This is not the first time when the Chief Minister has contributed in a plantation drive or spoken up about the importance of tree plantation. Earlier this month, the state of Uttarakhand, generally referred to as the Devbhumi (land of the Gods) due to a large number of Hindu temples and pilgrimage centres in the state, celebrated the onset of monsoon by planting over 6.25 lakh trees, with Mr Rawat joining in. The tree plantation drive was conducted under “Rispana to Rishiparna” (start to end) campaign, launched on the occasion of Harela (the day of green) festival, aimed at carrying out large scale plantation drive across state for better water conservation.

#Harela parv of Uttarakhand is celebrated across hills 3 times every year. Harela means the “day of green” and one celebrated today marks the onset of monsoon. Our govt uses Harela to carry out large scale plantation drive across state for better water conservation @gssjodhpur pic.twitter.com/mKOPmQ7tro