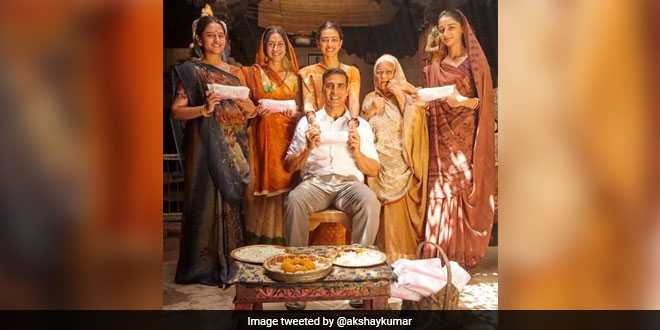 New Delhi: As the world marks Menstrual Hygiene Day today, the reel life PadMan Akshay Kumar along with his co-actor Radhika Apte share posts on their social media spreading awareness about menstruation. In 2018, both the actors were seen in R Balki directed film PadMan, a movie based on the social innovator Arunachalam Muruganantham, who invented the machine to manufacture low cost sanitary pads for women in rural India without access to hygiene products. Akshay Kumar, who essayed the role of Arunachalam Muruganantham in the film shared a still from the film and said, “Happy Menstrual Hygiene Day to all the girls, mothers and sisters. Let’s all help every girl child feel hygienic, safe and confident every day of the month.”

Happy #MenstrualHygieneDay to all the Girls, Mothers and Sisters. Lets all help every girl child feel Hygienic, Safe & Confident every day of the month #Period ???????? pic.twitter.com/Id7sVHFYS0

Actor Akshay Kumar has always been vocal about the cause, he has also undertaken an initiative of introducing 60 sanitary napkins vending machine in Maharashtra along with Yuva Sena leader Aaditya Thackeray.

Actor Radhika Apte, who played the role of Akshay Kumar’s wife in PadMan, too shared a still from the movie and said: “Happy menstrual hygiene day. May 28.”

On #MenstrualHygieneDay, let us celebrate the original Indian superhero: Arunachalam Muruganantham. Read his story
The Sanitary Man from a Sacred Land from @mrsfunnybones #TheLegendOfLakshmiPrasad only on our app! https://t.co/Uv7SV56bZT pic.twitter.com/Ihs9Z8sYJG

On the other hand, Miss World 2017 Manushi Chhillar who has been spreading awareness about menstrual hygiene in India using her platform and her initiative Project Shakti tweeted, “If you’ve got the gear, then there’s nothing to fear!!! #MenstrualHygieneDay”

If you’ve got the gear, then there’s nothing to fear!!! #MenstrualHygieneDay pic.twitter.com/v69iVEoPql

Lack Of Awareness About Menstruation In India

As per the National Family Health Survey 2015-2016, out of 336 million menstruating women in India about 121 million, which is about mere 36 percent women, are using sanitary napkins. Apart from this, according to a report by the NGO Dasra titled ‘Spot On!’ almost 23 million girls in India drop out of school annually, because of lack of menstrual hygiene management facilities.

Related Topics:
Menstrual Hygiene Day Menstruation In India
Up Next

Over 10,000 Kg Of Garbage Collected From Mount Everest

Menstrual Hygiene Day Facts: Only 36 Percent Of The Women In India Use Sanitary Pads During Periods