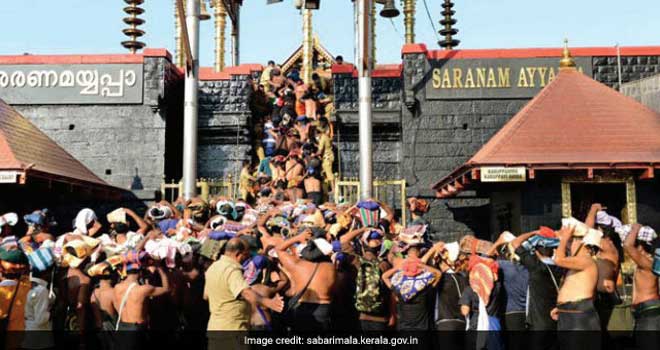 New Delhi: The Kerala High Court today imposed a complete ban on plastic in Sabarimala, in order to ensure an eco-friendly pilgrimage to the famous hill shrine of Lord Ayyappa.  Two years ago, the High Court had banned sale of any material, including water, in plastic bottles or packets at any place connected to the famous hill shrine situated in the dense forest. In its order, a Division Bench of the High Court comprising Justice P R Ramachandra Menon and Devan Ramachandran said only bio-degradable products prescribed by the temple ‘tantri’ (chief priest) can be brought to the temple by pilgrims in their ‘irumudikkettu’ (sacred bundle).

Considering a special report prepared by the Sabarimala special commissioner in this regard, the High Court directed the authorities to enforce the plastic ban in the temple and its premises from the coming season. The court directed the authorities to provide information about its order to pilgrims from all other states. The order was issued in wake of reports that serious environmental problems were created in the temple located in an ecologically sensitive forest, due to indiscriminate use of plastics by devotees.

Thousands of devotees from various states, especially in the south, throng the temple during the two-month long annual pilgrimage season which starts mid-November. The Court also said that it will monitor the steps taken by the authorities to ensure the ban, as earlier orders in this regard were not implemented wholly by the Sabarimala authorities.

Rag-pickers To Work As ‘Environment Warriors’