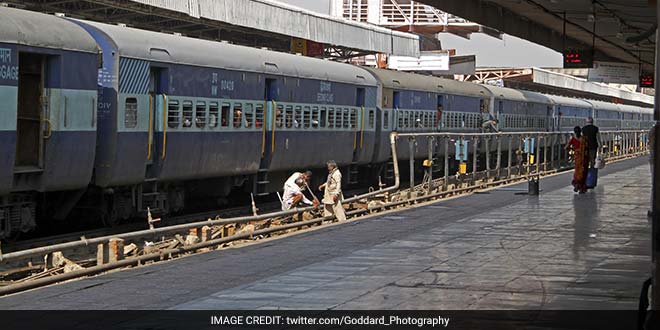 New Delhi: Installation of bio-toilets is being touted as one of the biggest achievements of the Railway Ministry as 60 percent of the coaches have already been fitted with these eco-friendly toilets so far. “The toilets on the entire rail network, whether passenger trains, Express, Duronto, Rajdhani or unreserved ones, will be replaced with bio toilets. The work on the balance is going on expeditiously and by next year, it will be 100 percent bio toilets in the railways,” the Railways Minister Piyush Goyal said. Recently, Railway Minister Piyush Goyal took to Twitter to declare that Indian Railways has installed highest ever bio-toilets in train coaches in 2017-18, which is 64 percent higher than last year, taking the total number of bio-toilets in coaches to 1.25 lakh.

In line with PM @NarendraModi's 'Swachh Bharat Mission', Indian Railways has installed highest ever bio-toilets in train coaches in 2017-18, which is 64% higher than last year, taking the total number of bio-toilets in coaches to 1,25,000. https://t.co/82fXu5f0QT pic.twitter.com/29ksC0nios

Notably, the work to install bio-toilets in trains actually begun back in January 2011 with the introduction of 57 bio-toilets in the Gwalior-Varanasi Bundelkhand Express train. Now, the Railway ministry has advanced the earlier deadline of fitting bio-toilets in its entire fleet from 2021-2022 to 2019, and an outlay of Rs 1,220 crore has been provided for completion of this work.

To achieve the target of 100 per cent bio toilets, railway workshops have been instructed to compulsorily install bio-toilets in all existing in-service eligible coaches undergoing mid-life rehabilitation and periodical overhaul.

The work was on to retro-fit additional vaccum-assisted flushing units in these toilets, which have been developed with the help of the Defence Research and Development Organisation (DRDO) under the ‘Make In India’ drive instead of importing them,” said the railways minister.

He further added that this will completely eliminate defecation on the tracks, which apart from being unhygienic also affects rail safety because the uric acid can damage the tracks and cause accidents.

As per our estimates, approximately 4,000 metric tonnes of human waste is discharged from train coaches every day. With the proliferation of bio-toilets in 60 percent coaches, commensurate human discharge in open has been eliminated, said one of the officials of Indian Railways.

A bio-toilet looks exactly like a regular toilet but operates differently. In these bio-toilets, fitted underneath the lavatories, the human waste is collected (bio-digesters can hold up to 8,000 litres of human waste) and processed by anaerobic bacteria that converts it mainly into pathogen-free water and bio-gases – mainly Methane and Carbon Dioxide.

The gases escape into the atmosphere and waste water is discharged after chlorination onto the track. Human waste, thus, does not fall on the railway tracks, improving cleanliness and hygiene at platforms and eases the work of track and coaches maintenance staff.