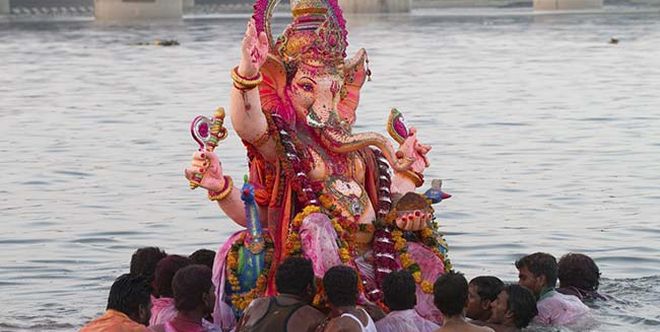 New Delhi: For Ganesh Chaturthi, a 10-day-long festival which falls in September (13-23) to celebrate the birth of Lord Ganesha, the actor and United Nations Environment Goodwill Ambassador Dia Mirza has requested people to shun the use of plastic. The actor, who has consistently voiced her support for the Maharashtra plastic ban since it was first notified on March 23, took to social media to request the people and leaders in Mumbai to contribute their bit by eradicating the use of plastic for decorating Ganesh pandals. During the festival, the pandals or platforms are set up everywhere across the city, showcasing idols of the revered elephant god Ganesh in all kinds of creative forms and setup, to attract huge crowds.

This year as we approach Ganesh Utsav, it will be incredible to see all our MPs, MLAs and leaders display their solidarity for Swachh Bharat by making our pandals free of plastics and plaster of paris, she wrote.

This year as we approach #GaneshUtsav it will be incredible to see all our MP’s, MLA’s and leaders display their solidarity for #SwachhBharat by making our pandals free of plastics and plaster of paris. @ShelarAshish @poonam_mahajan @AUThackeray @milinddeora ????????????????

The Ganesh Utsav begins with the installation of elaborately crafted idols or statutes of Ganesha in homes and podiums, which get especially constructed and beautifully decorated by sculptors, using plaster of paris (POP). Usually, it takes several months before the Ganesh idols made up of PoP get dissolved into water. Also, the common man has found an ideal alternative in decorative material made of plastics and fibre, which should be minimized to protect the environment.

Notably, the Bombay High Court on July 13 also declined to relax the ban on sale of decoration items made of thermocol for use in the forthcoming Ganesh Chaturthi festival in Maharashtra. A division bench of Justices A S Oka and Riyaz Chagla dismissed a petition filed by the Thermocol Fabricator and Decoration Association, seeking relaxation of the ban only for this year’s Ganesh festival to be celebrated in September. The court, while turning down the plea noted that the court cannot ignore the adverse effects of plastic waste on the environment.

Last year during the Ganesh Utsav, some organisations and people also used the occasion to promote the cause of Swachh Bharat by forming eco-friendly Ganesha idols, thus making the celebrations less harmful for the water bodies and aquatic life forms during Ganapati Visarjan (immersion of Ganesh idols in lakes, rivers and sea).

Notably, this is not the first time the actor has raised her voice for a better environment. She has campaigned extensively to beat plastic pollution, wherein she not only urged everyone to ditch single-use plastic items from their life but also broke her relationship with items made of plastic. She often goes out to pick up plastic and other form of waste from Mumbai’s beaches. A few days ago, she also advocated the need of the implementation of Extended Producers Responsibility, a policy approach under which plastic producers have the responsibility for the treatment or disposal of post-consumer products effectively.