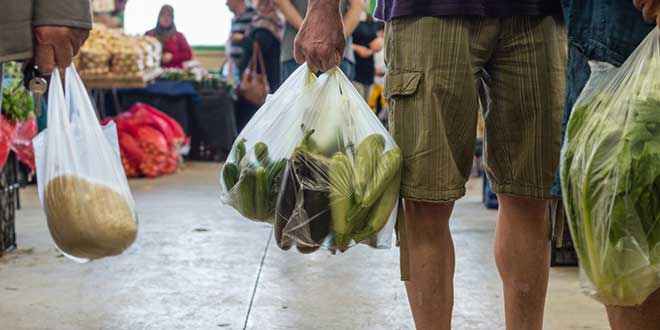 New Delhi: The Uttar Pradesh plastic ban came into effect with an ordinance from the governor’s office. Valid from July 15, the ban prohibits the manufacture, sale and possession of plastic below 50 microns. The ordinance issued by UP governor Ram Naik also completely bans manufacture or sale of plastic cups, glasses, plates or any other form of cutlery.  On previous occasions, Uttar Pradesh Chief Minister Yogi Adityanath had verbally announced the ban, though civic bodies were yet to receive any official communication on it. The governor’s ordinance has turned the ban into an official one, and with the ordinance, UP Plastic and Other Bio Degradable (regulation of use and disposal) (Amendment) Ordinance 2018 becomes effective.

As per the ordinance cleared by the governor’s office, plastic bags below 50 microns in thickness and plastic products shall be manufactured or sold across the state. The provision also details the fines to be levied on violators. First time offenders, if caught using plastic bags or items, will be fined Rs 1,000 and can face up to one month’s imprisonment. Second time violations will attract imprisonment for up to six months and fines ranging from Rs 5,000 to Rs 20,000, depending on the amount of plastic seized from the individual. Anyone found to be involved in manufacture, sale, storage and transportation of plastic items will face imprisonment for six months and minimum fine of Rs 10,000. Repeat violations can result in imprisonment for a year and minimum fine of Rs 20,000 going up to Rs 1 lakh.

The ordinance issued by the governor’s office has amended the 2000 ordinance and has increased the amount to be imposed as fines. The new ordinance has also banned thermocol and all products manufactured from thermocol. All municipal bodies across the state are expected to adhere by the ordinance and seize plastics, said Ashish Tiwari, Member Secretary, Uttar Pradesh Pollution Control Board.

The ordinance will be valid till January 2019, post which the state government will have to introduce a bill in the legislative assembly to and get it passed to give the ban legitimacy. As per the ordinance the ban will be rolled out in phases. While plastic bags have been banned from July 15 thermocol products will be banned from August 15. And in the last phase, disposable plastic glasses and plates will be banned from October 2, 2018. The manufacture, sale and transport of plastic items will also be banned in a similarly phased manner.

“Unlike previous bans on plastic bags and other items, the recent ordinance has place for penal provision against the use of plastic. We are hoping that the fines and imprisonments and provisions for alternatives such as earthenware will ensure that the ban if effectively implemented this time,” said Mr Tiwari.

Uttar Pradesh has had a complicated tryst with plastic ban. The state had first imposed a blanket ban on plastic in 2000, but poorly structured laws and even weaker imposition resulted in its failure. In December 2015, the state had banned the sale, manufacture and distribution of plastic bags with thickness less than 40 microns, but second round of ban was not successful either. The recent ban comes armed with a range of punishments for violators, and it remains to be seen whether Uttar Pradesh gets third time lucky with their war on plastic.

In Maharashtra, Essel Plant To Generate Power From Waste