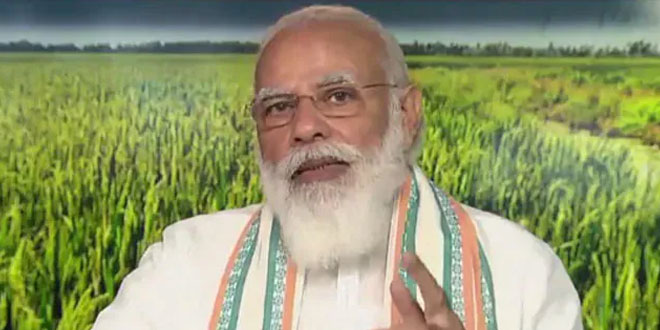 New Delhi: Prime Minister Narendra Modi today launched 35 crop varieties with special traits – developed by the Indian Council of Agricultural Research (ICAR) – to address the twin challenges of climate change and malnutrition.
The new crop varieties were dedicated to the nation through a video conference organised at all ICAR institutes, state and central agricultural universities and Krishi Vighyan Kendra.

Also Read: 20 Million Tons Of Bio-Pellets Made From Farm Stubble To Be Obtained By Power Ministry And NTPC

According to the PM’s Office or PMO, 35 crop varieties with special traits like climate resilience and higher nutrient-content have been developed in 2021.

These special traits crop varieties also include those that address the anti-nutritional factors found in some crops that adversely affect human and animal health.

Speaking on the occasion, Union Agriculture Minister Narendra Singh Tomar said 86 per cent of farmers in the country are small farmers and the Prime Minister’s focus has been on enhancing the income of these farmers.

The Prime Minister believes that farmers should not be dependent on compassion of others, but should rise on their own strength. For this, several schemes like PM-KISAN and transport facilities through Kisan rails have been launched to empower them, he said.

From seed to market, facilities are being provided to ensure their income doubles and contribute in making India self-reliant in the farm sector, he added.

He said this institute will promote agriculture in the state.

Climate change is a cause of concern across the world. We are seeing its impact in our area. There are two reasons — one is natural and the other one is reduction in carbon in soil, he said, and stressed on conducting an extensive study to ascertain the impact of climate change in the country.

Union Minister for Fisheries, Animal Husbandry and Poultry Parshottam Rupala, Ministers of State for Agriculture Kailash Choudhary and Shobha Karandlaje, and former Chief Minister of Chhattisgarh Raman Singh were present in the event.

Related Topics:
Environment swasth
Up Next

COVID-19 Has Made Children More Vulnerable To Malnutrition, Here’s How

COVID-19 Expected To Transmit For A Very Long Time: Senior WHO Official