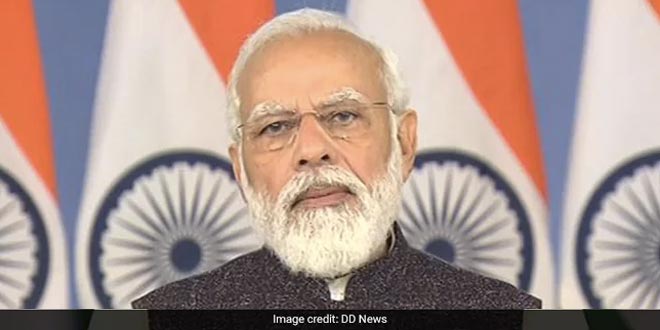 New Delhi: Prime Minister Narendra Modi on Sunday (June 26) shared inspiring stories of individuals and organisations who are working on ‘Waste to Wealth.’ Addressing a 90th edition of the monthly radio programme ‘Mann Ki Baat’, the Prime Minister said, talked about a campaign ‘save Chite Lui action plan’, where people of the Aizwal started this campaign to clean the river and decided to build a road using polythene taken out from the river, which is an example of ‘Waste to wealth’.

In ‘Mann Ki Baat’, we have been discussing successful efforts related to ‘Waste to wealth’. One such example is from Aizwal, the capital of Mizoram. There is a beautiful river ‘Chitte Lui’ in Aizwal, which due to negligence for years, had turned into a heap of dirt and garbage. In the past few years, efforts to save this river have started for these local agencies, NGOs and local people are together running the ‘save Chite Lui action plan’, he said.

PM Modi further said that in a village in Mizoram, the state’s first plastic road was built, which is clean and developed as well.

The campaign to clean the river has also given rise to the opportunity for turning waste into wealth creation. Actually, this river and its banks were ful of plastic and polythene waste. The organization working to save the river decided to build a road using this polythene, that is, the waste that came out of the river. From that, in a village in Mizoram, the state’s first plastic road was built… that is cleanliness and development as well, he added.

He also shared another story where the youth of Puducherry through their voluntary organizations took the to save sea, beaches and ecology, and have people here have started the ‘Recycling for Life’ campaign.

One such effort has also been undertaken by the youth of Puducherry through their voluntary organizations. Puducherry is situated along the sea coast. People come to see the beaches and marine beauty there. But, the pollution caused by plastic was also increasing on the sea coast of Puducherry, therefore, to save its sea, beaches and ecology, people here have started the ‘Recycling for Life’ campaign. Today, thousands of kilograms of garbage is collected and segregated every day in Karaikal, Puducherry. The organic waste from that is made into compost; the rest of the matter is separated and recycled. Such efforts are not only inspiring, but also lend momentum to India’s campaign against single-use plastic, said PM Modi.

Also Read: Opinion: Our Spaces, Our Future, How A Youth Leader Is Trying To Segregate Waste And Unite Communities

He further talked about the unique cycling rally which is also going on in Himachal Pradesh, the group of cyclists have started from Shimla to Mandi carrying the message of cleanliness.

When I am talking to you, a unique cycling rally is also going on in Himachal Pradesh. I want to tell you about this too. A group of cyclists have started from Shimla to Mandi carrying the message of cleanliness. These people will complete this distance of about one hundred and seventy-five kilometers on mountain roads, only by cycling. There are children as well as the elderly in this group. If our environment is clean, our mountains and rivers, our seas remain clean; our health also gets better. You must keep writing me about such efforts, he added.

Prime Minister further pitched for the conservation of rainwater stating that this responsibility has been taken by society together for centuries in India.

Monsoon is continuously progressing in our country. Rain is increasing in many states. This is also the time to make special efforts in the direction of ‘water’ and ‘water conservation’. In our country, for centuries, this responsibility has been taken by society together. You will remember, in ‘Mann Ki Baat’ we once discussed the legacy of step wells. The Baolis are those big wells which are reached by descending stairs, he said.

The Prime Minister also talked about the one such stepwell which is hundreds of years old – ‘Sultan Ki Baoli’, which was has become deserted and has turned into a pile of garbage

In Udaipur and Rajasthan, there is one such stepwell which is hundreds of years old – ‘Sultan Ki Baoli’. It was built by Rao Sultan Singh, but due to neglect, gradually this place has become deserted and has turned into a pile of garbage. One day some youths roaming around reached this stepwell and were very sad to see its condition. At that very moment, these youths resolved to change the picture and destiny of Sultan Ki Baoli. They named this mission of their – ‘Sultan se Sur-Tan’. You must be wondering, what is this ‘Sur Tan! In fact, with their efforts, these youths have not only rejuvenated the step well, but have also linked it to the notes and melody of the music. After cleaning the Sultan’s stepwell, after decorating it, takes place a program of harmony and music. There is so much talk of this change, that many people from abroad have started coming to see it, he said.

He further asked to create a similar sense of awareness about our water bodies by connecting them with music and other social programs.

The most important thing about this successful effort is that the youth who started the campaign are chartered accountants. Coincidentally, a few days from now, July 1 is observed as chartered accountants day. I congratulate all the CAs of the country in advance. We can create a similar sense of awareness about our water bodies by connecting them with music and other social programs. Water conservation is actually life conservation. You must have seen, nowadays, how many ‘river festivals’ are being held! Whichever water sources are there in your cities, you must organize one event or the other, the Prime Minister added.

No New Variant Of COVID-19 Has Been Reported; Severity, Hospitalisation Being Monitored: National Centre For Disease Control