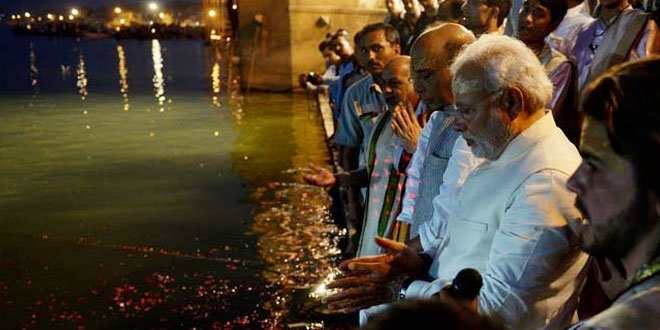 Varanasi: In this ancient city that is Prime Minister Narendra Modi‘s parliamentary constituency, development and stink literally go hand-in-hand — the latter in spite of the ambitious Swachh Bharat Abhiyan, or Clean India Mission, having been launched here more than two years ago.

As you walk down the markets and bathing stairways of this temple-dotted city along the Ganges, a river revered by Hindus, the garbage strewn all around raises an almighty stink. A cluster of cows and bulls squatting in the middle of roads poses a threat to passersby and commuters.

“Benaras (as Varanasi was earlier known) has a rich, grand cultural heritage but it’s literally stinking. You can see garbage even in the city’s upscale areas,” Smith Williams, a tourist from the US, told IANS.

He said vehicular and industrial pollution is alarmingly high. “It’s amazing to see the people here are literally gasping for breath.”

His wife Emily said stray animals, especially cows and dogs, were a nuisance in the city’s lanes — and pointed to a herd of cows standing around aimlessly.

Varanasi, also known as Kashi, rightly described by historian Mark Twain as being older than history, older than tradition and older than even legend, attracts a significant number of foreign tourists, apart from those within the country.

Read More: Varanasi: One Of India’s Holiest Cities, Death And Dirt Envelope It

They are mainly from China, Sri Lanka, Thailand, Japan, Myanmar, Taiwan and Vietnam who travel to cover the Sarnath-Gaya-Varanasi Buddhist circuit. The Buddha delivered his first sermon at Sarnath, about 15 km from here.

Another area of concern is toxic particulate pollution that has resulted in an eight-fold increase in respiratory diseases among children in the past decade, according to a new report, “Varanasi Chokes”. Corroborating observations from private doctors, it blames abnormally high air pollution levels — that spiked five times higher than the average this winter for several days — for the rise in asthma cases.

On the flip side, local taxi operator Suresh Dubey echoed many citizens in saying that PM Modi has contributed a lot in developing the city’s basic infrastructure like the ongoing construction of a four-lane highway, linking this city with the Uttar Pradesh capital Lucknow.

“The Lucknow-Varanasi highway, with an almost four-km-long flyover at the entrance of this city will definitely help ease the traffic chaos,” added Dubey, who has been driving a taxi in Varanasi for over two decades.

Locals see a major jump in central funding for developing and improving the city’s infrastructure with PM Modi being elected as a Lok Sabha member from here.

“With the initiatives of Prime Minister Modi-ji, the basic amenities will start shaping up in the years to come,” auto rickshaw driver Chand Seth said. He said it is also the duty of the local civic body and the state government to develop basic amenities in Varanasi.

A team led by the Varanasi Municipal Corporation Mayor visited Kyoto in April last year to make Varanasi a smart city on the pattern of the Japanese city, but deterioration persists. “There is need for strong political will to improve things,” said pediatrician Pradeep Jindal, who is based in the Sigra area.

Octogenarian Tripti Devi, who was born and brought up in this city, said PM Modi normally walked straight to Dashashwamedh ghat during his visits.

“Dashashwamedh ghat and its adjoining Sheetla and Rajendra Prasad ghats are one of the cleanest places. PM Modi should visit other ghats too so that the deteriorating conditions would improve there too,” she said.

As part of the Project Infrastructure Development for Destination and Circuits Scheme, Rs 18.23 crore has been sanctioned by the central government for basic amenities for the tourists at the ghats.

Fine Of Rs 10,000 For Throwing Waste In Public Places: NGT